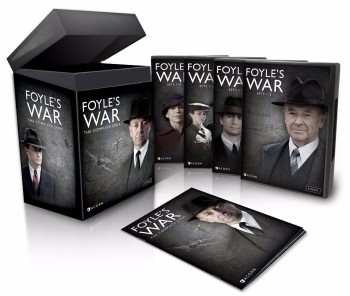 Christmas is barreling down the tracks at us (I know – ack!), and if you have British TV lovers on your gift list, here are three awesome sets from Acorn Media that I know they’ll love.

1. FOYLE’S WAR: THE COMPLETE SAGA (Buy on Amazon). The New York Times calls this “a gift from the gods” and says “the series ends on a perfect note.” The Wall Street Journal calls the show “a triumph from start to finish.” I so concur with all of it. This beautiful set – packaged in a box with a pop-up top – is the complete collection of the acclaimed detective series starring Michael Kitchen, including all 28 mysteries and more than six hours of bonus features – interviews, making-of documentaries, and behind-the-scenes featurettes.

If you’re not familiar with the show, the first six series are set during World War Two in Hastings, Sussex, England, where Detective Chief Superintendent Christopher Foyle (Michael Kitchen) attempts to catch criminals who are taking advantage of the confusion the war has created. He’s assisted by his driver Samantha “Sam” Stewart (Honeysuckle Weeks) and Detective Sergeant Paul Milner (Anthony Howell). From Series 7, the show finds Foyle retired and working for MI5, navigating the world of Cold War espionage.

It’s an excellent series, which in part, is why it was cancelled. On Jan. 12, 2015, it was announced that no more episodes would be forthcoming due to the high costs of production and ITV’s intention to broadcast original drama commissions. The last episode aired on Jan. 18, 2015. 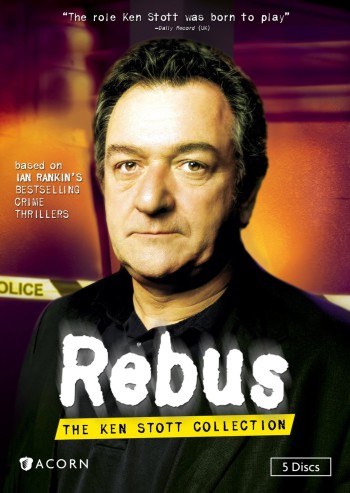 2. REBUS: THE KEN STOTT COLLECTION (Buy on Amazon). Ken Stott (he played Balin in “The Hobbit” series) stars as DI John Rebus, a hard drinking, unkempt, womanizing police officer whose job is his whole life. He’s the most senior and experienced DI at his station, and he has a mysterious past which his partner DS Siobhan Clarke gets glimpses of through various comments Rebus makes.

She wants to succeed, but doesn’t have much of a personal life and feels that being paired with Rebus jeopardizes her career because of his unorthodox methods. Then again, she’s also fascinated by the man and extremely loyal. DI Rebus’ boss is Chief Superintendent Templar, one of Rebus’ lovers in the distant past, and they can barely tolerate each now.

Based on Ian Rankin’s award-winning crime novels, “Rebus” is set in gritty, modern-day Edinburgh and this 5-disc set includes 10 mysteries that show the sardonic hero as he hunts down murderers, haunted by his own shortcomings and the human tragedy he faces daily. 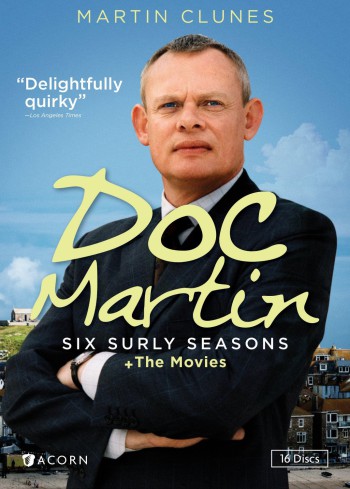 3. DOC MARTIN: SIX SURLY SEASON & THE MOVIES (Buy on Amazon). In this “delightfully quirky” series (the L.A. Times says that and I agree), Doc Martin (Martin Clunes) diagnoses a multitude of peculiar patients and hurts peoples’ feelings even as he heals their bodies.

Another great gift idea is Acorn TV, the premier streaming service for world-class television from Britain and beyond. Available in a gift subscription for $49.99/year, the shows are available at Acorn.TV and on a variety of devices.

Acorn TV features exclusive U.S. Premieres of first-rate international content every week to watch anytime. Subscribers were the first to see the newest seasons of Foyle’s War, Doc Martin, Murdoch Mysteries, Harry, Midsomer Murders, George Gently, Agatha Christie’s Partners in Crime, and A Place to Call Home, among many others.