In “Stink!,” filmmaker Jon Whelan exposes that the ingredient called “fragrance” actually hides a number of chemicals, many of which are toxic and carcinogenic. The film’s tagline is: “Things in America are not as they smell.”

Researchers have found more than 200 chemicals in the umbilical cords of newborns. Many of the chemicals used today are in a class called “Endocrine-disrupting chemicals” or EDC’s, which don’t just wreak havoc with our hormones – they can alter our DNA. 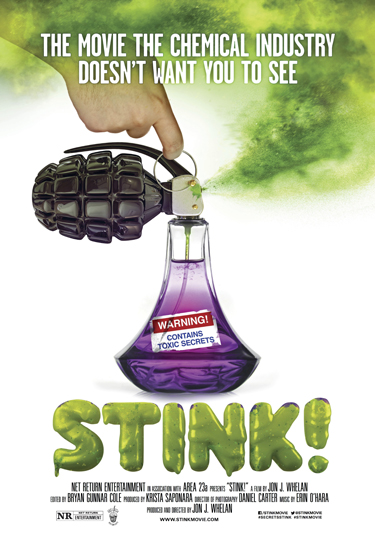 Flame retardants and cleaning products are not regulated like our foods. According to “Stink!,” no one has tested these products to make sure they’re safe. We’re literally the unwitting test subjects for these corporations.

One expert in the film says we’re waiting for data to prove that the chemicals are dangerous, but “our data are body bags.” Footage from a hearing that aired on C-Span is shown as Senator John Kerry questions the FDA Commissioner, taking him to task for not testing the safety of products.

We don’t have a framework in which the federal government requires that corporations prove a chemical safe before it can be used. Instead, we have a framework that allows companies to use chemicals until they are proven dangerous. Even so, some companies are using long known toxic and carcinogenic substances in their products, but because they don’t have to disclose all of the chemicals they include (often disguised under the generic ingredient of “fragrance” and protected by the belief that they have to guard their formulas from competitors), they are not policed.

It isn’t just cleaning products and personal care products that contain dangerous chemicals. It’s clothing, too, many of which are treated with those flame retardants I mentioned. This, in fact, is what made Whelan investigate the issue. He ordered pajamas for his young daughters but found that the fabric smelled terrible when the package was opened. When he couldn’t get answers from even an executive in the company as to the chemicals in the clothing, he had it tested by an independent lab and found that the pajamas contained, among other things, EDC’s.

The corporations are largely protected because it’s so difficult to pinpoint what’s behind health problems when they occur. As Whelan says in the film, “My wife, Heather, seemed perfectly healthy … and then, she wasn’t.” His wife died of breast cancer in 2009. It’s on the consumer to prove that a manufacturer’s product caused an illness, and it’s very difficult to prove that certain chemicals cause specific diseases.

A teenager with a life-threatening allergy to Axe body products is also featured in the film. They can’t determine the chemical that causes his reaction because the company refuses to disclose its formula. As a result, he can’t find out if other products contain the chemical. He can no longer go to high school because his reaction sends him into dangerous anaphylactic shock. Yet, he doesn’t seem to be allergic to anything else.

We worry about products made in China and other countries where there are few regulations, but an expert in the film claims that our regulations are less stringent than many other countries, which is turning us into a dumping ground. So, companies can make cheaper versions of their products for the American market, slowly turning the U.S. into a third world country. “Made in America should be a positive thing and not a warning label,” he says.

Manufacturers and the chemistry industry are willing to spend millions on lobbyists to fight legislation that would disclose these chemicals to consumers. Much like Michael Moore, Whelan confronts some of the people who are perpetuating these practices.

Two politicians who are pushing legislation that would force companies to label products are Steve Israel in New York and Jan Schakowsky in Illinois. But other politicians in the pockets of lobbyists for the chemical industry fight this legislation – politicians like Leonard Lance in New Jersey. When Whelan confronts Lance, the politician’s rhetoric is clearly well-rehearsed and devoid of any substantive meaning.

Whelan’s home movies of his wife are interspersed throughout the film, making the subject matter personal and touching. You’ll want to see this documentary and be more careful about the products you use – for your own safety and for the safety of your family.