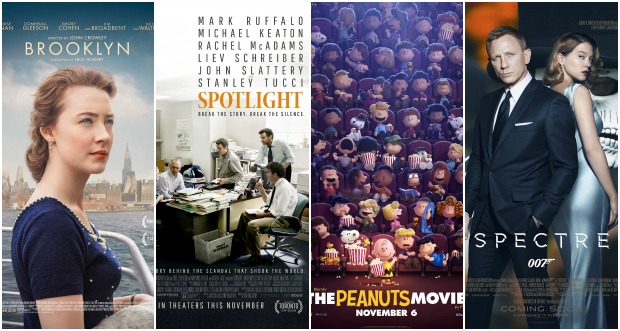 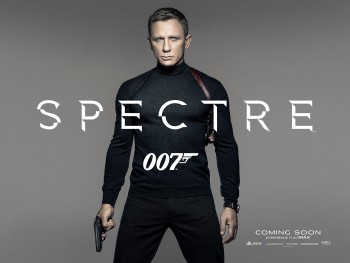 New movies this week include a new James Bond film AND a new Peanuts movie!

In limited release are “Trumbo,” starring  Bryan Cranston; “Miss You Already,” starring Toni Collette and Drew Barrymore; and “Lost in the Sun,” starring Josh Duhamel (also on VOD and iTunes). Let’s take a look at the wide releases.

Directed by Sam Mendes, the latest 007 film centers on a cryptic message from the past that sends James Bond (Daniel Craig) on a rogue mission to Mexico City and eventually Rome, where he meets Lucia Sciarra (Monica Bellucci), the beautiful and forbidden widow of an infamous criminal. Bond infiltrates a secret meeting and uncovers the existence of the sinister organization known as SPECTRE.

Meanwhile back in London, Max Denbigh (Andrew Scott), the new head of the Centre for National Security, questions Bond’s actions and challenges the relevance of MI6, led by M (Ralph Fiennes). Bond covertly enlists Moneypenny (Naomie Harris) and Q (Ben Whishaw) to help him seek out Madeleine Swann (Léa Seydoux), the daughter of his old nemesis Mr. White (Jesper Christensen), who may hold the clue to untangling the web of SPECTRE and the chilling connection between Bond and his enemy, played by Christoph Waltz.

Directed by Steve Martino, this brand new Peanuts movie – CGI animated and 3D – finds Snoopy, the world’s most lovable beagle (and flying ace!) embarking on his greatest mission as he and his team take to the skies to pursue their arch-nemesis. Meanwhile back home, his best pal Charlie Brown begins his own epic quest. So fun to see the Peanuts gang on the big screen.

“Brooklyn” tells the moving story of Eilis Lacey (Saoirse Ronan), a young Irish immigrant navigating her way through 1950s Brooklyn. Lured by the promise of America, Eilis departs Ireland and the comfort of her mother’s home for the shores of New York City. The initial shackles of homesickness quickly diminish as a fresh romance sweeps Eilis into the intoxicating charm of love. But soon, her new life is disrupted by her past, and Eilis must choose between two countries. Directed by John Crowley, this movie also stars Jim Broadbent, Julie Walters and Domhnall Gleeson.

Starring an amazing cast of Michael Keaton, Mark Ruffalo, Rachel McAdams, Liev Schreiber, Brian d’Arcy James and Stanley Tucci, “Spotlight” tells the riveting true story of the Pulitzer Prize-winning Boston Globe investigation that would rock the city and cause a crisis in one of the world’s oldest and most trusted institutions.

When the newspaper’s tenacious “Spotlight” team of reporters delves into allegations of abuse in the Catholic Church, their year-long investigation uncovers a decades-long cover-up at the highest levels of Boston’s religious, legal, and government establishment, touching off a wave of revelations around the world.

Directed by Academy Award-nominee Tom McCarthy, “Spotlight” is a tense investigative dramatic-thriller, tracing the steps to one of the biggest cover-ups in modern times.