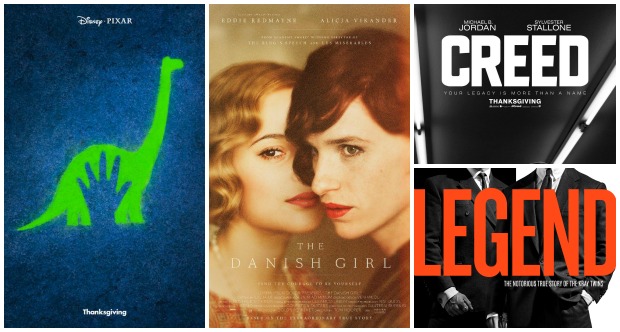 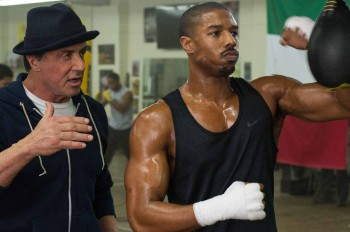 New movies this week include a sweet dinosaur film, a British mobster flick, another “Rocky” sequel and more. Let’s take a look at the new movies in theaters.  Note that release dates are subject to change.

From Oscar winner Brian Helgeland (“L.A. Confidential,” “Mystic River”) comes this true story of the rise and fall of London’s most notorious gangsters, Reggie and Ron Kray, both portrayed by Tom Hardy in an amazing double performance. “Legend” is a classic crime thriller that delves into the secret history of the 1960s and the extraordinary events that secured the infamy of the Kray twins. Also stars Emily Browning, Taron Egerton and Paul Anderson.

What if the asteroid that forever changed life on Earth missed the planet completely and giant dinosaurs never became extinct? Pixar takes us on an epic journey into the world of dinosaurs where an Apatosaurus named Arlo makes an unlikely human friend. While traveling through a harsh and mysterious landscape, Arlo learns the power of confronting his fears and discovers that he’s stronger than he thought. Directed by Peter Sohn, this cute movie features the voice talent of Frances McDormand, Jeffrey Wright, Anna Paquin and Steve Zahn.

Another “Rocky” film? Yes, starring and produced by Sylvester Stallone. Adonis Johnson (Jordan) never knew his famous father, world heavyweight champion Apollo Creed, who died before he was born. But there’s no denying that boxing is in his blood, so Adonis heads to Philadelphia, the site of Apollo Creed’s legendary match with a tough upstart named Rocky Balboa. Adonis tracks down Rocky (Stallone) and asks him to be his trainer. Although out of the fight game, Rocky sees in Adonis the strength and determination he knew in Apollo and agrees to take him on. Rocky trains the young fighter, even as the former champ is battling an opponent more deadly than any he faced in the ring. Also stars Tessa Thompson as Bianca, a local singer-songwriter who becomes involved with Adonis; Phylicia Rashad as Mary Anne Creed, Apollo’s widow; and English pro boxer and former three-time ABA Heavyweight Champion Anthony Bellew as boxing champ “Pretty” Ricky Conlan.

James McAvoy and Daniel Radcliffe star in this thrilling twist on the legendary tale written by Mary Shelley. Radical scientist Victor Frankenstein (McAvoy) and his equally brilliant protégé Igor Strausman (Radcliffe) share a noble vision of aiding humanity through their groundbreaking research into immortality. But Victor’s experiments go too far, and his obsession has horrifying consequences. Only Igor can bring his friend back from the brink of madness and save him from his monstrous creation. Directed by Paul McGuigan, this movie also stars Jessica Brown Findlay and Andrew Scott.

Inspired by the true story of Danish painter Einar Wegener (Eddie Redmayne) and his wife, Gerda (Alicia Vikander), this portrait of a marriage asks: What do you do when someone you love wants to change? It starts with a question, a simple favor asked of a husband by his wife on an afternoon chilled by the Baltic wind while both are painting in their studio. Her portrait model has canceled, and would he mind slipping into a pair of women’s shoes and stockings for a few moments so she can finish the painting on time? With that, one of the most passionate and unusual love stories of the 20th century begins. Directed by Tom Hooper, this movie also stars Ben Whishaw, Sebastian Koch, Matthias Schoenaerts and Amer Heard.