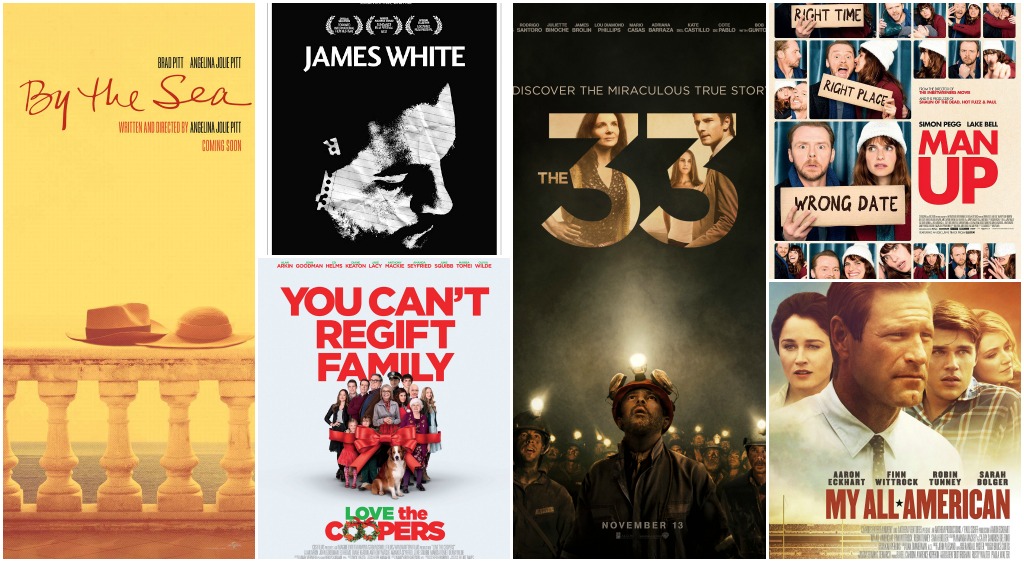 New movies this week include Angelina Jolie’s “By the Sea,” the Chilean mining disaster “The 33” and more. In limited release are “Heist,” starring Jeffrey Dean Morgan and Robert De Niro (also On Demand), and “Shelter” starring Jennifer Connelly. Let’s take a look at the wide releases.

Written, directed and produced by Oscar winner Angelina Jolie Pitt, this movie centers on American writer Roland (Brad Pitt) and his wife, Vanessa (Jolie Pitt), who arrive in a tranquil seaside resort in 1970s France, their marriage in apparent crisis.

As they spend time with fellow travelers, including young newlyweds Lea (Melanie Laurent) and François (Melvil Poupaud), and village locals Michel (Niels Arestrup) and Patrice (Richard Bohringer), the couple begins to come to terms with unresolved issues in their own lives.

In 2010, the eyes of the world turned to Chile, where 33 miners were buried alive by the catastrophic explosion and collapse of a 100-year-old gold and copper mine. Over the next 69 days, an international team worked night and day in a desperate attempt to rescue the trapped men, as their families, friends, and millions of people waited anxiously for any sign of hope.

A story of resilience, personal transformation and triumph of the human spirit, “The 33” takes us to the Earth’s darkest depths, revealing the psyches of the men trapped in the mine, and depicting the courage of both the miners and their families who refused to give up. Directed by Patricia Riggen, this movie stars Antonio Banderas, Juliette Binoche, James Brolin and Lou Diamond Phillips.

James White (Christopher Abbott) is a troubled 20-something trying to stay afloat in a frenzied New York City. He retreats further into a self-destructive lifestyle, but is forced to take control of his life as his mother (Cynthia Nixon) battles a serious illness. As pressure mounts, James must find new reserves of strength or risk imploding completely. The directorial debut of “Martha Marcy May Marlene” producer Josh Mond, “James White,” explores loss and the deep relationship between a mother and son.

What Freddie Steinmark (Finn Wittrock) wants most in the world is to play football. Deemed too small by the usual athletic standards, his father trains him hard, and Freddie brings a fight to the game that ultimately gets him noticed by legendary University of Texas coach Darrell Royal (Aaron Eckhart). Awarded a scholarship and a chance to play for the Longhorns, Freddie moves to Austin with his high school sweetheart Linda (Sarah Bolger), determined to make the team.

Alongside his old teammate Bobby Mitchell (Rett Terrell) and new pal James Street (Juston Street), Freddie is put through the paces of a grueling practice schedule. But just as the team is reveling in the success of the season, Freddie suffers an injury that leads to a shocking diagnosis and the biggest challenge he will ever face.

This comedy centers on the Cooper clan, four generations of extended family who come together for their annual Christmas Eve celebration. As the evening unfolds, a series of unexpected visitors and unlikely events turn things upside down, leading them all toward a surprising rediscovery of family bonds and the spirit of the holiday. Directed by Jessie Nelson, this movie features an all-star cast, including Alan Arkin, John Goodman, Ed Helms, Diane Keaton, Anthony Mackie, Amanda Seyfried, and Olivia Wilde.

When Nancy (Lake Bell) is mistaken for Jack’s (Simon Pegg) blind date under the clock at Waterloo Station, she decides to just go with it. What could possibly go wrong? “Man Up” is an honest, heartwarming romantic comedy about taking chances and rolling with the consequences. One night, two people, on a first date like no other. Directed by Ben Palmer, this movie also stars Olivia Williams and Stephen Campbell Moore.

Jane Boursaw is the film critic and editor-in-chief of Reel Life With Jane. Images in this feature used courtesy of the studios and distributors.