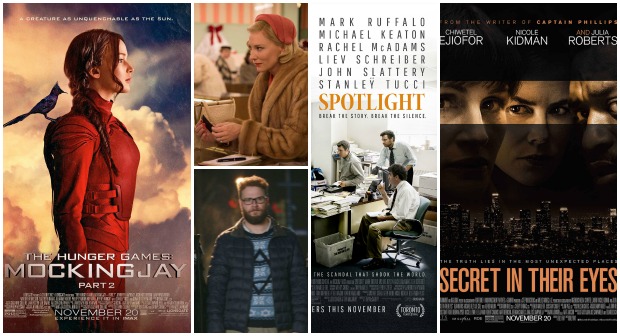 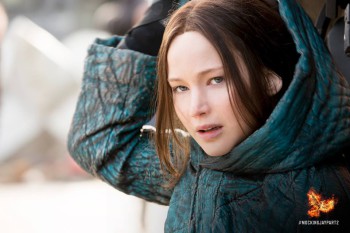 New movies this week include the final installment of “The Hunger Games” franchise, along with several Oscar contenders, including “Carol” and “Spotlight.” Let’s take a look at the new movies in theaters.

Directed by Francis Lawrence, “The Hunger Games” franchise arrives at its final chapter with “The Hunger Games: Mockingjay – Part 2,” in which Katniss Everdeen (Jennifer Lawrence) now fully realizes the stakes are no longer just for survival, they are for the future. With the nation of Panem in a full scale war, she confronts President Snow (Donald Sutherland) in the final showdown. Teamed with her closest friends – including Gale (Liam Hemsworth), Finnick (Sam Claflin), and Peeta (Josh Hutcherson) – Katniss goes off mission, using the unit from District 13 to stage an assassination attempt on President Snow, who’s intent on destroying her.

Directed by Tom McCarthy, this movie stars Michael Keaton, Mark Ruffalo, Rachel McAdams, Liev Schreiber, Brian d’Arcy James and Stanley Tucci, and tells the riveting true story of the Pulitzer Prize-winning Boston Globe investigation that would rock the world and cause a crisis in one of the world’s oldest and most trusted institutions. When the newspaper’s tenacious “Spotlight” team of reporters delves into allegations of abuse in the Catholic Church, their year-long investigation uncovers a decades-long cover-up at the highest levels of Boston’s religious, legal, and government establishment, touching off a wave of revelations around the globe.

SECRET IN THEIR EYES

Directed by Billy Ray, this thriller centers on FBI investigator Ray (Chiwetel Ejiofor), who finds the teenage daughter of his partner Jess (Julia Roberts) murdered in a brutal crime. They team with the District Attorney, Claire (Nicole Kidman), to bring the murderer to justice, but learn that the murderer is a protected witness in an ongoing terror investigation, and they can only watch as he walks free. After searching for 13 years, they uncover a surprising new lead that leads to the elusive killer. No one is prepared, however, for the shocking, secret that reveals the destructive effects of grief and vengeance on the human soul.

This adaptation of Patricia Highsmith’s novel “The Price of Salt” follows two women from different backgrounds who find themselves in an unexpected love affair in 1950s New York. A young woman in her 20s, Therese Belivet (Rooney Mara), is a clerk working in a Manhattan department store and dreaming of a more fulfilling life when she meets Carol (Cate Blanchett), an alluring woman trapped in a loveless marriage. While Carol breaks free from the confines of marriage, her husband (Kyle Chandler) begins to question her competence as a mother as her involvement with Therese and close relationship with her best friend Abby (Sarah Paulson) come to light.

R for drug use and language throughout, some strong sexual content and graphic nudity | In Theaters 11/20 | Ok for Kids 17+ | Columbia/Sony | Reel Preview: 3.5 of 5 Reels | The Night Before

From Jonathan Levine (“50/50”) comes this new comedy centered on Ethan (Joseph Gordon-Levitt), Isaac (Seth Rogen) and Chris (Anthony Mackie), who’ve been friends since childhood. For the past decade, their annual Christmas Eve reunion has been a night of debauchery and hilarity. Now that they’re entering adulthood, the tradition is coming to an end, and to make it as memorable as possible, they set out to find the Nutcracka Ball – the Holy Grail of Christmas parties. Also stars Lizzy Caplan, Michael Shannon and Mindy Kaling.

Jane Boursaw is the film critic and editor-in-chief of Reel Life With Jane. Images in this feature used courtesy of the studios and distributors.