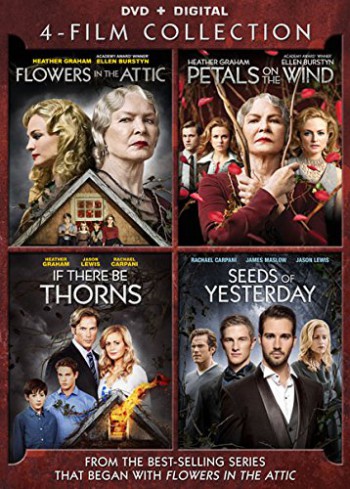 New on DVD and Digital from Lionsgate Home Entertainment this week is a great set that includes all four movies in the “Flowers in the Attic” series:

BUY 4-PACK “FLOWERS IN THE ATTIC” ON AMAZON

The stories of the ultimate dysfunctional family reveal a decade of dark and shocking family secrets, and for the first time, all four chapters of the Dollanganger family saga are available in one set. Relive the salaciously scandalous stories, starting with “Flowers in the Attic” – the highest-rated made-for-cable movie in 2014 (on Lifetime) – followed by “Petals on the Wind,” “If There Be Thorns,” and “Seeds of Yesterday.”

If you’re not familiar with the story, I won’t spoil it TOO much for you, other than to say it’s a gothic tale centering on the four Dollanganger siblings, beginning with the harrowing abandonment by their mother and forced captivity in a locked attic by their cruel grandmother.

Over the course of time, after years of imprisonment, their eventual physical escape into the real world reveals the emotional damage they endured – their deeply troubled relationships, disturbing secrets, and dark tragedy that will haunt the family forever.

The set is rated TV-14 with a runtime of six hours. Check out the trailer for “Flowers in the Attic.”