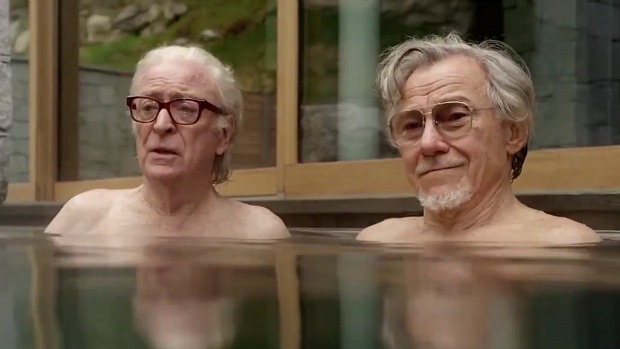 Paolo Sorrentino’s new movie, “Youth,” stars Michael Caine as retired composer Fred Ballinger, who is famous enough that the Queen’s emissary seeks him out at a spa in Switzerland to entreat him to conduct a special Command performance of his famous early compositions.

“Youth” screened Thursday evening for Bafta members at the AMC Lincoln Square. The director and cast members Michael Caine, Jane Fonda, Harvey Keitel and Paul Dano materialized – they were actually brought out in the dark while the credits rolled – to participate in a 30 minute Q&A that turned out to be as lively and as much fun as you’d expect from such a starry cast.

Set in a luxurious but bizarre Swiss sanatorium, Ballinger is making his yearly visit for tests and treatments although, as he says, “At my age getting in shape is a waste of time.” Fred tools around at the spa with his longtime buddy Michael (Harvey Keitel), and the two spend a lot of time walking around the grounds to ruminate about life, death, sex, youth, old age and their prostates.

Michael is an aging director who is writing a screenplay with his production group for diva actress Brenda Morel, played by Jane Fonda, who turns up at the spa to pull the plug on the project. She is made up to look as unappealing and brittle as possible in an unflattering wig and pancake makeup. Fonda’s brief but powerhouse performance earned her a Hollywood Film Award for best supporting actress.

When asked how if he was familiar with the director’s work, Caine noted that he’d seen all of Sorrentino’s movies, including “The Great Beauty,” which won an Academy Award for Best Foreign Film in 2013.

As for how he came to be in the film, Caine said one day his agent rang out of the blue and told him he had a script from the Italian director and wanted Caine to play the lead role. “I was completely stunned because it was like having a script from another world. I was amazed that he’d heard of me,” Caine said. Everyone in the audience laughed.

“How the hell did he hear about me?” Caine said. “I’m well known in England and America, but in Italy? But my agent said he wrote it for me, and I went, ‘Oh my God!” Caine said he nearly told the director he would do it without seeing the script, but instead said coolly, “Send me the script. I’ll read it… and I got conceited about it, and I asked Paolo, ‘Did you really write this for me?’ The director replied, “’I wrote it for two of you but the other one was busy’… that put me in my place,” said Caine.

Caine added that he trained with two conductors for four weeks so that he would look realistic in front of an orchestra. “We would go into a corner and practice,” when he wasn’t filming, he said.

Caine and Keitel’s scenes together are imbued with such warmth and naturalism, and someone asked how they went about achieving that rapport.

Keitel said that he felt so close to the story and that he had such respect for the director that it was all a learning experience. “I feel I should be sitting in that seat over there,” Keitel said, pointing to the first row of the audience, “and maybe asking myself these questions.”

Keitel then jumped in the first row and started asking himself questions about the film to which he replied. As for what he thought the movie meant, he said the question brought to mind a story he heard about John Cassavetes, who brought some of his friends from the Bronx to the Museum of Modern Art so he could show them the Sculpture Garden. This was after he made the film “Shadows.” Cassavetes’ friends looked at the sculptures and asked, “What’s this bullshit mean?” He told them, “Whatever you want it to mean.”

Keitel added that he admired Caine’s work from a long time ago, beginning with “Alfie.” “He was one of the actors who set a standard for actors,” Keitel said. When he finally met Caine, he told him, “You are the closest guy to being from Brooklyn that’s never been to Brooklyn that I ever met.” Caine replied, “I feel the same way about you. You’re the most cockney of anyone I’ve ever met.” “So we shared that,” said Keitel, “… and then Michael having been in the British army, me in the marines.”

About his scene with Fonda, Keitel reminisced about the first time he met her, which was at the Actors Studio five decades ago. He went to a play she performed in. His date was Miss Brooklyn. “She was my girlfriend at the time,” Keitel said. “We’re sitting there. I’m holding my girlfriend’s hand” – and at that point, Keitel took Fonda’s hand to demonstrate – “then all of the sudden, Jane Fonda, back in the 60’s, Jane Fonda comes walking across the stage in a bikini.” Keitel said he then dropped his girlfriend’s hand in a hurry. Keitel said his next thought was, “What am I doing with my life? So that was it!”

Back to “Youth,” Fonda asked Caine what he thought the film was about?

Fonda harrumphed that he was lying. “Do you know what he says at press conferences? He says it’s about two hours and twenty minutes.”

Fonda added, “Paolo describes what he thinks it’s about, and I don’t understand a word he says. But for me it’s about aging. It’s about the chronology of your life. The number of years you’ve lived is relatively insignificant compared to where your spirit is at, and if you are open and alive and still have passion in your veins, then you are young.”

From my front row seat close to Fonda, she looked terrific. She wore a form fitting black pantsuit and a sheer see-through blouse.

Caine continued on the movie’s theme. He referred to a scene in the movie where he’s talking to the doctor in the sanatorium. “He asks me, ‘How does it feel to be old?’ And I said I don’t understand how I got here. That was the most important line in the film because I don’t know how I got here. ‘Cause six or seven years ago I was 35. And suddenly my wife says, ‘It’s your 81st birthday.’ And I go, ‘What?’”