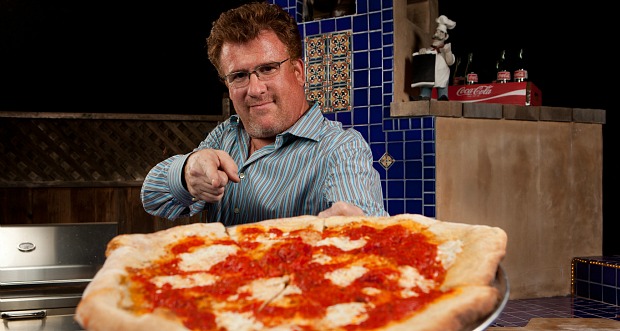 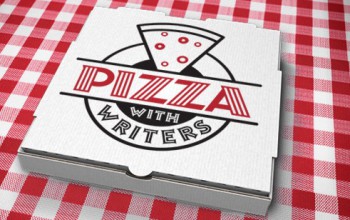 With his most recent show, the 14-time Emmy-nominated producer Jon Hotchkiss managed to combine three (of my) favorite things – pizza, television and writing – into one show.

“Pizza With Writers” is a 13 episode series, streaming via AdorablePuppiesInc.com. On the show, Jon talks to writers from “The Muppets,” “The Daily Show,” “SNL,” “Tosh.0,” “@Midnight,” “Legends of Tomorrow,” “Arrow” (the spinoff premiering on the WB in January), and many others.

Hotchkiss, who has worked on such shows as ‘Politically Incorrect’ and ‘Penn & Teller’s Bullshit,’ says that he’s in a happy place right now and it isn’t just about the pizza, although that’s a huge part of it. It’s about what the pizza stands for – he works for himself from his own home, creating shows practically in his own backyard. Except, in this case, ‘Pizza With Writers’ was filmed right in his own backyard.

You combined my love of television, writing, and pizza, so when were you in my head and when did you come up with this idea for a show?

Did you ever have something that, from the time you were little, was with you your entire life, say, a musical instrument or comic book? For me, it’s pizza. I’ve always loved eating it, but I was also interested in where it was made, how it was made, the ingredients that were used and what you can add to it.

A few years ago, I decided to pursue what remained of my career independently after making a first television series called ‘This vs. That.’ We built an authentic Italian wood-burning pizza oven in the backyard with an outdoor kitchen and I’ve enjoyed it immensely. About a year ago, I thought about shooting a show at my house with pizza. I formed the idea that I could have my own TV channel and that would contain in it the programs I was interested in making, which are factual entertainment shows.

I’m a guy who’s interested in how the world works and finding answers to questions to make my life better, and I know how to make that information entertaining. I knew I would interview colleagues and people I don’t know and we’ll make pizza and talk about what we do. Who doesn’t love pizza and talking about TV? It was easy to get people to do the show.

Was that little boy in you who loved pizza all giddy that you just created a show where you ate pizza and talked to really cool people?

It brings me joy because I have a different experience every time, and the thing I came to know about cooking and creative people is that they love to cook. If you’re a screenwriter, you write a movie and then, two years later, the movie may come out as opposed to creating with food and watching people enjoy it right at that very moment. It’s very satisfying.

How do you make money?

The first problem was distribution. For 75 years, the only way to distribute TV is either people need to have access to the satellites or to the cable wires. Thanks to the Internet, distribution is solved and now it’s possible, from the garage, to distribute content around the world.

The second problem was the cost of the equipment and what it takes to make, create, and produce the kind of TV shows that I make. I call them factual entertainment, because they are not a reality show. I’m not following around a group of people and then, through editing, making their lives more interesting. My shows have a format where interesting, funny things are being revealed to you in an interesting, funny way.

Now I own the equipment – the lights, sand bags and cameras — all the gear that it takes to make the kind of programs that I make. The gear that it took to edit a show has been compressed and fits on a Macintosh laptop. We are able to edit to broadcast quality standards on my desktop. Problem solved.

The third problem is marketing, and I’m not underselling the importance of that. The Discovery Channel and NBC, for example, have to market to hundreds of millions of people in a weekend. For me, I don’t need to make $50 million on a program because I don’t need 10 million subscribers. I only need 10,000 to make it sustainable for me. Our shows are good, if not better, than the network and cable channels. My shows are uncensored. The networks have to answer to advertisers and they have antiquated notions of what’s appropriate for TV. I don’t have to answer to that.

What tip would you give to screenwriters?

My advice, too, is that it’s hard and a different path for everyone. Following your passion and doing the thing you love oftentimes leads to you getting paid for it, but sometimes it doesn’t. I have to really be confident that whatever show I’m going to make they are going to like. I don’t have the resources to have misses.