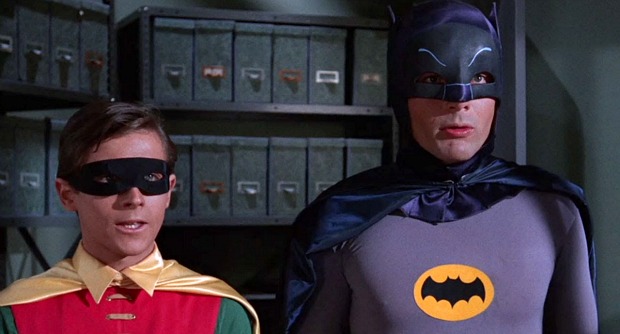 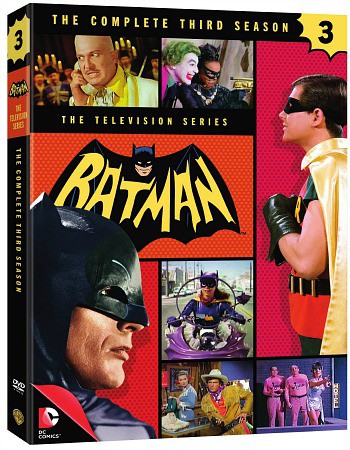 Sometimes you just want to go back – way back – to a time when TV shows were not only ok to watch as a family, but they were fun! Our little family of four (me, hubby, two kids – ages 18 and 21) love these classic TV shows, including “Batman,” starring Adam West (Batman) and Burt Ward (Robin). We especially love the campy graphics – “Zap!” “Pow!” “Thwack!”

Warner Bros. Home Entertainment has now released “Batman: The Complete Third Season” in a 4-DVD set. The final, completely remastered 26 episodes of the iconic series from 1966 was released on Nov. 3, 2015. It’s a great gift for all the classic TV fans on your list.

Now we can leap into the third season whenever we want. The felonious and foul must be stopped to keep Gotham safe, and a newly formed Terrific Trio must turn chaos to calm! With rogue wrongdoers like the sly Siren, lethal Louie The Lilac and unethical Egghead running rampant, Batman, Robin and Batgirl (Yvonne Craig) have their Super Hero hands full.

Now completely re-mastered, all the originality, crime-fighting action and arch-villainy of special guest villains like Milton Berle, Eartha Kitt, and Joan Collins, are on DVD in pristine splendor like never before — for those who were there, and a new generation of Bat-fans!

“For decades, Batman has proven its popularity and it all started with this live-action television title that had Batman leaping off the comic book pages to the silver screen for the first time” said Rosemary Markson, WBHE Senior Vice President, TV Marketing. “We are thrilled to release Batman: The Complete Third Season on DVD for longtime bat-fans to go back in time and relive their favorite ‘pows’ and ‘zaps’ while also introducing the series to younger generations.”

She’s right. Everything started with this awesome TV show, and there’s no better time to watch it again or for the first time.

Here’s the great Adam West discussing some of the famous guest stars who paraded through the series.