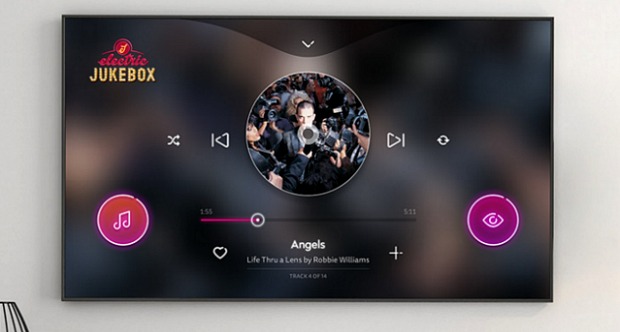 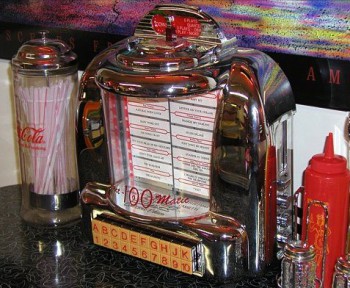 The first time I ever saw a jukebox, it was like the heavens opened up and shined a big heavenly light on me. Music. You just pick the song you want, punch in the numbers, and you’re good to go.

I loved going to the Big Boy restaurant here in Traverse City, Michigan, because they had these little jukeboxes on the tables, and they were so very cool. It was like having your own private jukebox just for you! You’d think that they’d be loud enough to hear at the next table over, but they somehow figured out the exact level to play those songs so only your table could hear it. It was a beautiful thing.

But we’re in the 21st century now, and those little table jukeboxes (or any jukeboxes, for that matter) are few and far between. That’s why I love the idea of Electric Jukebox, a unique plug and play music streaming experience for the home – with NO MONTHLY SUBSCRIPTION or registration equipment. Yes, those words are important enough for me to write them in all caps.

Here’s how it works: Simply plug Electric Jukebox into your television, connect to WiFi and instantly play millions of albums, curated music channels and celebrity mixtapes in CD quality. For the first time, streaming is as easy as playing a CD or switching on the radio. 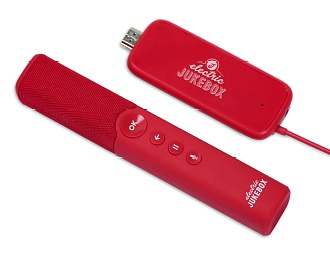 It features all the benefits of a premium music streaming subscription service in a box, but without the need for a smartphone or a PC, user accounts, passwords, app downloads or monthly credit card subscriptions. That translates to awesome.

Electric Jukebox features a dedicated stick which plugs into the HDMI port of your TV and instantly turns your TV into a jukebox with millions of songs to enjoy using WiFi. It also features a beautifully designed gesture-based controller with built-in microphone featuring voice control, making it easy to find and play music on your television. Designed to sit on the coffee table and be used by the whole family, it’s the easiest and most enjoyable way to listen to music at home.

Sheryl Crow says, “I love Electric Jukebox because it brings people together. Listening to music and sharing those experiences together is what life’s all about. With headphones and iPhones we’ve somehow lost all that. Electric Jukebox plugs into your TV and turns it into a jukebox with all the music you want, played out loud in your home for you to listen together. Simple, fun and no fuss.”

She speaks truth. People are plugged into their own little devices these days, and Electric Jukebox is a cool way to bring people together to listen to music – TOGETHER.

Along with the stick that plugs into your TV’s HDMI port, there’s also a motion-sensitive controller with a built-in microphone for voice search. Once set up, the Electric Jukebox welcomes users with a homescreen featuring just three icons; My Music, Discover and Search, each represented by a neon themed icon in the shape of a heart, music note and magnifying glass.