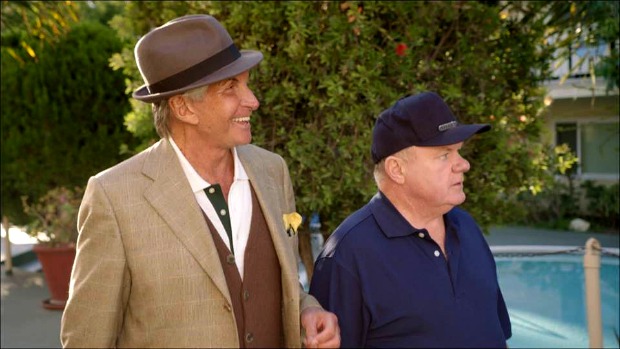 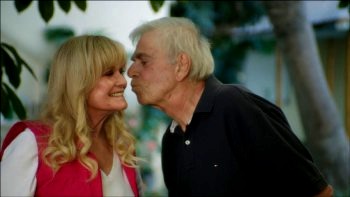 This weekend, Hollywood comes to Woodstock, New York for the 16th Annual Woodstock Film Festival. If aspiring screenwriters could learn one lesson from these artists, it’s ‘write what you know.’

That’s exactly what veteran director Rosemary Rodriguez, who is known for her film and television work including “Empire,” “The Good Wife,” and the upcoming Marvel Netflix series “Jessica Jones,” did in her latest film “Silver Skies.” The result is a very compassionate film ten years in the making that was inspired by Rodriguez’ own parents. The story chronicles a group of seniors whose lives are turned upside down when their apartment complex threatens to be sold.

Legendary actors George Hamilton, Valerie Perrine, Mariette Hartley, Barbara Bain, Alex Rocco and Jack McGhee bring the film to life as it touches on sensitive issues that seniors face as they age, including financial struggles, relationships, and elder abuse. Hamilton, known for his comedic role in ‘Love at First Bite,’ has a heartwarming performance as Phil, who is facing the onset of Alzheimer’s and occasionally believes that he is Dean Martin. Alex Rocco, known for his role as Moe Greene in ‘The Godfather’ as well as his sitcom appearances on “The Facts of Life,” is adorable in the role of Frank, a widower who is fighting unrequited love from Ethel (Valerie Perrine). Although he was in declining health during the filming, Rocco’s slurred speech and slower movements actually added to the gentleness and the sweetness of his character.

Mariette Hartley portrays Harriett, who is fighting her own personal demons and keeps to herself until circumstances bring the residents together. Harriett finds a common ground with Eve (Barbara Bain) who has one extremely tough, emotional scene that brings to light a very sensitive topic.

“Silver Skies” is Rodriguez’ second feature film (“Acts of Worship” was her first), and we had a chance to talk with her before the festival.

Aspiring screenwriters are often told that writing movies that appeal to the 18-39 age bracket are a better way to have a successful film. However, your movie stars, and skews, to an older audience. Was that intentional, and did you think it was a risk to do that?

I didn’t think I was taking a risk. When I wrote it, I wasn’t thinking it was just for older people. I might have been naïve. It’s for anyone with grandparents. I want to make movies that speak to the underdog and give people a voice. In this movie, seniors are being portrayed in an honest way.

What’s your personal connection behind this film?

My parents adopted me when my mom was 42. People didn’t do that back then, but it’s more normal now. I watched their struggles and the older they got, the more they became invisible to the world. The movie is a tribute to them. The character of Nick (played by Jack McGhee) represents my father, and the character of Eve (played by Barbara Bain) represents my mother. I have always been sort of enamored with older people. It’s time that we paid attention to their wisdom and experience. Life is hard enough.

You said that Nick and Eve are based on your father and mother. Is it easier or harder to write when you have an emotional connection to the character?

It’s definitely easier to write. Part of my brain shuts off. I know it’s my dad, but it’s also a character and you know things that you need to put in there. There are a lot of funny moments in the movie, but “Silver Skies” is also a very dramatic look at some serious issues that seniors face, including financial, relationships and, unfortunately, sexual abuse. It’s a complicated, emotional movie.

The scenes are obviously about women and their interaction with men. On some level or another, we can all relate. Every woman is going to relate to a guy being aggressive, combined with the fact that they are easy targets. My parents retired and they were scared to go out at night. I wanted to raise the issue of elder abuse. There is a lot of elder abuse in various forms. As women, we never end our journey trying to express ourselves.

How long had you worked on the script for “Silver Skies”?

I’ve pretty much been directing television, but I write to keep my creativity going for myself and to keep my spirit going. I wrote “Silver Skies” a long time ago after my first movie, “Acts of Worship.” I came up with the idea, and my sister, Pat, and I ran with it. I’ve been trying to get it off the ground for ten years.

The hardest part was getting the money for it. I had worked on an episode of “Law & Order” and Dennis Farina knew the Rat Pack and knew Dean Martin. We gave him a script and he was trying to help me get the money and introduce me to actors. Meanwhile, I was hustling trying to get it out there, but people weren’t interested in movies about seniors. We ended up getting the money a year and a half ago.

I called Dennis and said let’s pick a start date. Two weeks later, he passed away. I was devastated, but the movie came together so quickly after that and relatively easily. I wouldn’t have picked a start date if I hadn’t have called him. I call him my guardian angel. I still can’t believe it fell in so easily after that.

Unfortunately, you also lost Alex Rocco, who has a starring role as Frank, a widower who is suffering from unrequited love. I didn’t realize he had medical issues and I was taken back when he started to talk, but he is so cute in this role. Talk about the chemistry between the actors.

Wasn’t Alex cute? He was going through this awkwardness on the set, too, but he was such a doll. Our casting director Beth Holmes and executive producer Fred Roos (“The Godfather”) put together this incredible group of actors. I didn’t know that when I started this I would get to hang out with these actors. They didn’t need the money to do this film. I got to watch them as artists. It was amazing.

We put offers out and the right people showed up for this film and they put their hearts into it. Jack Betts (from “Spiderman”) and Bain worked together so they knew each other for years. Everyone knows George Hamilton, and he’s everything you think he is – an incredibly dresser, smart, and funny and smells good, but what you don’t know is that he’s so down to earth. He made career choices that he was this ladies’ man and the tan and the funny guy.

People don’t realize what a great actor he is, and this was a complicated part. His mother had Alzheimer’s and my dad had it, and we wanted to nail it. One minute they are with you and one minute they aren’t. He nailed those moments and was perfect for the role. Barbara Bain did an incredibly difficult scene on the second day, and it was so good. There isn’t a false note in the movie.

A few days ago, Marvel and Netflix released the trailer for “Jessica Jones,” a show that you will be directing. What is it like directing for Marvel?

It was awesome, so much fun. I love Marvel, and Krysten Ritter (Jessica) knocks it out as does David Tennant (“Purple Man”). You get to do fun stuff, it’s a comic book. You get to do cool things with the camera, but it’s a very complicated female role. I’m not just saying good stuff. It’s good.

I love these kind of opportunities. I just don’t want to be pigeonholed as a female director. People are talking about women in the industry, but more action needs to be put behind it. We need to be more decisive that we’re going to hire more females. However, my dream job would be to direct a James Bond movie.

Who did you admire in the industry when you were younger, and what advice would you give up-and-coming screenwriters and directors?

Robert Altman is one of my favorite filmmakers. He and Alfred Hitchcock were brilliant, as well as Martin Scorsese. When it comes to women directors, I have to say Kathryn Bigelow (“The Hurt Locker,” “Zero Dark Thirty”) is amazing. To up-and-comers, I would say don’t give up, no matter what. And do not take anything personally.

“Silver Skies” premieres today at 4 p.m. at the Woodstock Playhouse, 103 Mill Hill Rd, Woodstock, NY 12498; (845) 679-6900. Rosemary Rodriguez and select cast and filmmakers will attend the screening and participate in a Q&A. For tickets or more information on the Woodstock Film Festival, visit http://www.woodstockfilmfestival.com.