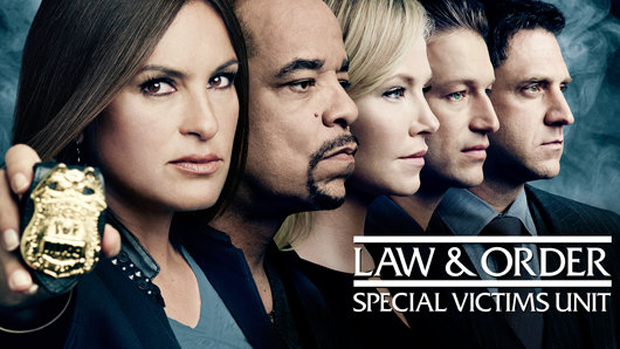 “Law and Order: SVU” Executive Producer and Showrunner Warren Leight and actor Andy Karl spent some time on the phone with a few journalists this week to discuss the season and next Wednesday’s episode called “Maternal Instincts.” Karl will debut on the show as Sergeant Mike Dodds in the episode, which airs Oct. 21, 2015 on NBC at 9pm. Below are some of the highlights of the call:

Warren on this, his last year as Executive Producer and Showrunner of the show:

It’s bittersweet, but there’s something liberating about “This is your last season.” So, I think we’re taking bigger chances. I think we’re pushing the narrative more quickly. The last thing in the world I want anyone to think is I was distracted or I phoned it in for the last year. I want this to be the best year I’ve done out of the five…. I want to walk off at the end of the season and be exhausted and know I couldn’t have done anything better.

Warren and Andy on how the Mike Dodds character rocks the boat in the squad room:

Warren: The new guy is the son of an important guy – the chief of the police department played by Peter Gallagher. So, everybody’s usual way of doing things is thrown off at this time. I’m in transition this year, and so, in a strange sort of way, we put a lot of the characters into transition as well….

Even though Mike Dodds is doing his best to be one of the guys, everybody is walking on egg shells because they don’t know if he’s going to rat them out. And there’s a lot of tension about – no offense, Andy – but nobody wants to work with the boss’s son. And that’s one of the things we’re enjoying.

And I think Fin’s character [played by Ice-T] is particularly put out by it, and then in an upcoming episode, Benson [played by Mariska Hargitay] looks right at Fin and goes “I offered you the chance to be sergeant. You weren’t interested. Shut up.” So, there’s a ripple effect when the boss’s son comes to work with you.

Andy: And also in my own life, I’m joining this ensemble cast that has all their friendships and off-camera time that’s all sort of established. And how they work together on camera is really interesting. So, it’s a unique experience to walk into something that works so well and be the monkey wrench, so to speak.

Andy on the biggest challenges for his new character:

There’s several challenges. One is this character is new to SVU entirely. He’s never been an investigator in Special Victims Unit. So, there’s a lot of nuances that go along with that type of investigation and things that he’s not used to. He comes from anti-crime, which is really going out and busting the perps and bringing them back and throwing them in jail.

So, now the interrogations and things like that have a little bit of nuance to find out more information that’s very important to SVU. I think that’s probably going to be the hardest thing for him to deal with.

But also, I think there’s some great things, like I don’t think he’s ever had a strong woman boss, which I find very interesting. Lieutenant Benson is a very strong presence, and she’s very knowledgeable. Making sure that he shows her respect is top of the list, too.

Andy on doing research for his character:

I was doing some research, and I met with the first precinct in New York. I talked to one of the lieutenants there and tried to figure out if they’ve ever been through that situation of being the new guy. And they all said “Come in strong.” It all depends on the type of person you are – whether you’re like “come in and try to solve every case” or you just want to be part of the system….

I don’t want to be my daddy’s boy. I want to be my own established sergeant, and it’s a mixture of all that stuff. So, it’s very interesting to play that.

Andy on playing Peter Gallagher’s son on SVU after having played his rival for the affections of Kristin Chenoweth in the recent Broadway musical, “On the Twentieth Century”:

It’s really wonderful to have had that history with him in that show prior to coming on to SVU. It’s sort of made things very easy to step up in that first scene with my father and have a relationship already set. So, that was a plus. I think it’s great.

Warren on his propensity for casting musical theater actors:

I write by ear, and I try to have a rhythm in my writing. It may just all be in my head, but I’ve noticed over the years that people with musical chops can hear that rhythm or seem to hear that rhythm intuitively.  And it’s helpful to me. We have an extraordinarily musical cast. Danny Pino is a very good singer. Kelli [Giddish] is a very good singer. Ice is a musical legend. Raul [Esparza, who plays ADA Barba and is a four-time Tony Award nominee]. Mariska can sing. In any other cast, Mariska will be the best singer.

I saw a musical Andy did, I guess two years ago – “Rocky….” Every year, there’s the unfairly vilified, but actually very good, musical of the year. It got pigeon-holed because theater critics in New York are snobs, and so, they didn’t appreciate it. It was brilliantly staged.

And I went in not knowing what to expect and probably thinking it’s going to be another one of these movie remakes, and I was knocked out by Andy’s performance. That entire show was on his shoulders. It was a nice ensemble cast, but he’s in every moment of it. And he’s boxing every night! And, you know, it’s good for us to have a detective who has a certain physicality, which Andy has, who has a certain emotional availability, which I saw in that show….

It gives me a certain security. A guy who can go out and do that eight nights a week is not going to get tired on a TV schedule, is not going to complain about long hours, is not going to shrink from the task. If you go out every night live in front of 1,000 people in that house and have to box and break your heart and sing, you’ll be okay, you know? It certainly worked for Raul [Esparza].

In last night’s episode, we brought in Daveed Diggs and Leslie Odom, Jr., who are currently starring in “Hamilton” [on Broadway]. The week before that, we had Geneva Carr and Chris Sieber who are in “Hand To God” [on Broadway].

So far, I feel like I got lucky with Andy. I haven’t told him that, though.

Warren on whether he might have Daveed Diggs back on the show, similar to the recurring character played by Leslie Odom, Jr.:

You know, it’s funny because we were shopping around for a believable activist advocate lawyer, and it just seemed like, “How about the guy who’s playing Thomas Jefferson [in “Hamilton” on Broadway]? … When you see “Hamilton,” you’re struck by, boy, this is a cast I haven’t seen. You don’t get to see that mix of cast, that talented a cast, that fresh a cast. And it was immediately believable.

I would use him again tomorrow. He has to work around the schedule of that show because evidently, “Hamilton” is going to run for a while – like forever. But any time he’s available, he’s a terrific actor … and we’ll be happy to have him back.

Warren on some of the other big issues that SVU will explore this season:

We have one coming up about a religious family that tries to impose their morality on the viewers of their reality show … but may have a dirty secret festering within their home. So, a lot of what we’re going after this year is hypocrisy. It seems like it was the summer of hypocrisy….

So many TV shows now are the zombie stories and the superhero stories, and there’s very few places left to really discuss issues of sexual politics and rape culture and moral hypocrisy in our life. So, it’s a privilege that we get to write about that stuff and that we have an audience that pays attention to it.

Warren on what we can expect from the next two episodes:

The next episode up, which Andy mentioned, is called “Maternal Instincts.” And it is the return of Rollins’ sister. We start off with a celebrated musician accused of a crime that he doesn’t remember. And the reason he doesn’t remember it is … he had met an escort in the hotel bar, brought her up to his room, and according to him, she drugged him. And he has no memory of the assault that he gets accused of.

So, we start there. And then, it gets murky because the escort turns out to be Rollins’ sister who’s got outstanding warrants on her and is, you know, just the person who has been dragging Amanda Rollins [played by Kelli Giddish] down.

This is the most dysfunctional family drama we’ve done in a long time. And it’s almost too much pressure for Rollins to bear. Her mom is played by Virginia Madsen. And as is often the case in dysfunctional families, the one who got away and did good is the one that’s considered to be the one who’s betrayed the family.

And then right after that, we go to our religious family episode. I mentioned before we have Geneva Carr and Chris Sieber in that episode as the parents of ten kids, and there’s a reality show that’s the Baker family. The reality show is “The Baker’s Dozen….”

We opened a purity ball in that episode when a young girl promises her dad she will be faithful to him and virginal until the day he gives her away in marriage. And you kind of know if SVU opens with a purity ball, it’s not going to go well.