Few stories this year have captivated the public imagination as much as Caitlyn Jenner’s transition, which was met with a wide variety of responses, both supportive and otherwise. Jenner, in coming out to the public, joins the many other celebrities such as Carmen Carrera, Laverne Cox, and Janet Mock, who are paving the way for transgender women in Hollywood and the rest of the country.

Laverne Cox is making strides to change that.

In addition to her incredible talent as an actress, Cox also has a rich history of trans activism, taking her empowering message of moving past gender expectations to live a more authentic life. I had the privilege of seeing her myself when she spoke at an event called Justice is the New Black on my school campus, where she gracefully told her personal story, remarking “Justice is what love looks like in public.”

In what might be some of her most important work to date, Cox has taken on the United States Census Bureau, urging them to include the transgender population in their upcoming surveys.

Cox participated in a panel consisting of Shelby Chestnut, from the Anti-Violence Project and Cecilia Chung, of the Transgender Law Center at the Social Good Summit late last month to discuss the ways that a lack of census data affects the trans population. She says:

“I was thinking that visibility is only part of the equation … we must have social policy, systemic change. And then I thought about the Census. Systemically, this idea of the gender binary is very much institutionalized in the fact that we just don’t count trans people.”

As it stands currently, the Census provides just two options for gender identity: male and female. Therefore, the census isn’t gathering data that describes the trans experience, as the survey assumes everyone is born into the gender they will identify with for their whole life.

This is an oversight with far reaching consequences, given that we don’t even really know how many trans people exist in The United States, much less the world. How can current leadership inform policy, prioritize the public interest, and advocate for social equity when they have no way of accurately measuring the demographic they serve?

The disclusion of gender identity in surveys like the census is a demographic malpractice, according to Gary Gates, a demographer responsible for the most accurate estimation of the trans population. He approximates there to be around 700,000 people in the US, which he based off of information taken from two surveys, both of which have substantial limitations.

Gates has spent a majority of his career trying to convince survey writers to be more cognizant of including LGBT Americans in their research, and recently, major breakthroughs have been made. In 2013, the Center for Disease Control’s National Health Interview Survey  included a section on sexual orientation. This is the first time data like this has been available for gay, lesbian, and bisexual individuals.

Unfortunately, as with most progressive endeavors, headway in the LGBTQ community is often made in a series of narrowly focused small steps. This year alone, the community celebrated a huge win with marriage equality. Similarly, we have experienced a growing acceptance of gay culture through pride parades, which have become cultural destinations. These landmarks ought to be celebrated, sure, but often times other important issues are swept under the rug, many of which affect the most marginalized.

We’re at an interesting turning point now. Any day now, we could be hearing that our country is finally ready to respect our humanity and our right to love and be recognized beyond gender … It’s great, but as I’m a trans woman and activist, my focus has changed … I’m regularly worried about adequate health care and doctors who know what’s up with my body. I’m lucky now, but there was also a time when I was worried I’d be outed and lose my job. Then I’d be in the spiral of homelessness that consumes much of my community. It’s true. Trans folk often have much more urgent things to worry about, like finding restrooms, validating educational spaces, housing, and more. As well, I can’t help but think about all of the trans women my community has lost this year. It’s difficult when the larger queer community, which arguably has more social power and influence, ignores the fact that we can multitask … We can be more than a single-issue movement. 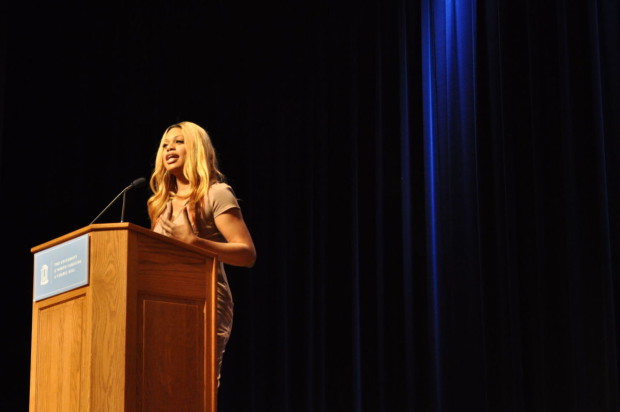 Willis’ concerns about the LGBTQ community are justified, and echoed by the panelists at the Social Good Summit. Cox herself argued that the violence against trans people exists, in part, because they are not counted as a valuable population. When you’re not considered a valuable population, little is done to mend the problems that affect your community disproportionately.

The American healthcare system is also a challenge for trans individuals. Although the Affordable Care Act provided full health coverage to more than 6.7 million Americans as of October 2014, there are some loopholes within the ACA that have allowed discrimination for transgender people to continue. For example, in order to obtain subsidized health insurance through the marketplace, the gender marker on the insurance policy has to match the gender marker on a patient’s social security card.

What may be even more shocking is the rate in which violence against trans people is committed. When Cox attended the panel just over a month ago, 17 trans women of color were the victim of homicide, a number which has since increased.

Though Laverne Cox has achieved insurmountable success in the past five years, becoming the first trans woman of color to have a leading role in a television show, the use of her platform to talk about issues affecting society’s most marginalized populations may be some of her most important and life changing work to date.