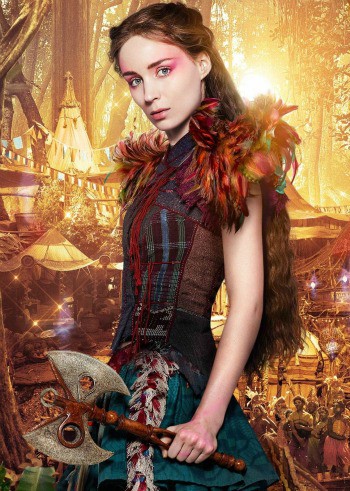 Joe Wright’s “Pan” reimagines the beginnings of the J.M. Barrie fable about the 12-year-old boy who doesn’t want to grow up. In this live-action 3-D feature, Peter is still an orphan boy with a rebellious streak, but he’s whisked off to Neverland in an airborne pirate ship where he’s forced to work in a mine with other lost boys.

Joe Wright, who is known for adapting in his unique way literature into films (“Atonement,” “Anna Karenina,” “Pride and Prejudice”) has set the story in a mash up of time periods and styles. Instead of Edwardian London the story begins during the Second World War. And there are some zany, unfamiliar characters from the original story, including a glitter rock villain, Blackbeard, played by a camped up Hugh Jackman.

Critics have panned the film since its release last Friday, but there’s no denying it has intriguing casting, including Jackman, Garrett Hedlund as James Hook and Oscar nominee Rooney Mara as Tiger Lily. Mara in particular is a stand out in her midriff barring costumes and elaborate feathered headpieces, and she gets to do some moves in her battle scenes with Blackbeard that are as impressive as those she executed in “The Girl With the Dragon Tattoo.”

As soon as Mara was announced to play Tiger Lily, there was a backlash and complaints the character was being whitewashed. At a press conference for “Pan” in Manhattan recently, Joe Wright explained, “The idea of Tiger Lily as Native American comes from Disney’s cartoon, not from Barrie’s source material.”

He noted that Barrie was “non-specific about Tiger Lily and her community’s race, so I decided trying to make the tribes and natives be native of planet Earth and indigenous of the globe. That felt like a kind of opportunity then to have these people come together to fight Blackbeard, who’s the kind of colonial villain who wants to overtake their land. Then when I got to thinking about Tiger Lily’s casting, I thought I could cast her from anywhere, so I had a lovely time meeting actresses from India, China, and Japan, Africans, African Americans, Native Americans, Australia,” he said.

Wright cast Rooney, he said, because there is something regal as well as scary about her. “She’s quite badass, you don’t want to mess with her. Therefore, she was the greatest actress that had the qualities described in the screenplay.”

Mara, who co-stars with Cate Blanchett in “Carol,” which screened last weekend at the New York Film Festival and which earned her a best actress award at the Cannes Film Festival, has a compelling presence on screen and in person. Her Tiger Lily is feisty, funny and yes, badass.

Following are highlights from Mara’s comments at the press conference for “Pan”:

Why did you want to play Tiger Lily?

I really wanted to work with Joe (Wright), but I also wanted to do a movie my family could see where I’m not taking my clothes off or getting horribly abused by someone. I grew up loving fairytales and Peter Pan.

It was getting to go to work every day and not taking yourself so seriously and just playing make believe. It was something really different for me, and it was something I really wanted and needed to do.

How did you create your Tiger Lily?

A lot of it was done for us. We had an amazing script, we had Joe, we had an amazing hair and makeup team and I really spent a lot of time with the stunt department learning how to fight, so I could stand up to Hugh, who’s just good at everything he does. It took a lot of really hard work to be able to come off as somewhat good at fighting. We were lucky enough that we got a good amount of rehearsal time, and the three of us spending a lot of time together was really helpful.

What do you do to stay out of trouble as a former child actor?

I’ve seen lots of child actors go off the rails, and I don’t really want to do that.

How did the costumes help you transform into your character?

I think costumes are one of the most helpful things for getting into character. My costume was incredible, and Joe’s son, who is obsessed with belly buttons, inspired the idea. It sounded like a cute idea “Oh yeah, I’ll wear a midriff.” Then two months later, I’m like, “Why did I fucking do this?” It was really hard to fight in my costume because there were so many things dangling everywhere. It was hard to hide padding or harnesses under it. It was an incredible costume, but by year four, I was ready to burn it.

You’re in some very anticipated movies this year like “Carol.” How do you like your performance as Tiger Lily in respect to that film?

I have a hard time watching anything I’m in until five years later. I don’t have good perspective on myself. I’m super hard on myself and critical, and when I watch things I’m in I only see the things I wish I hadn’t done. I’m never pleased with myself until years later, and then I’m like, “Oh yeah, that’s not bad.”

Your character Tiger Lily has a lot of really intense fight scenes. Did you think about what girls would think seeing it?

For me, it was a reason I wanted to do this film. Like I said, I grew up loving fairy tales, but unfortunately, in a lot of them the female characters end up being some sort of victim or damsel in distress, and Tiger Lily wasn’t like that at all. In some ways, she was more capable than the boys and she could fully take care of herself and then some. I loved and appreciated that about the script.

You’re in another movie with children, Stephen Daldry’s “Trash.” How do you like working with young actors?

I really love it. Working with Levi (Miller, who plays Peter Pan) was one of the great joys of working on this film. He’s so open and curious, and he has no cynicism and made it so easy for us to come in and use our imaginations and play make-believe. Children don’t know how to lie yet; they’re just finding the truth in whatever they’re doing.