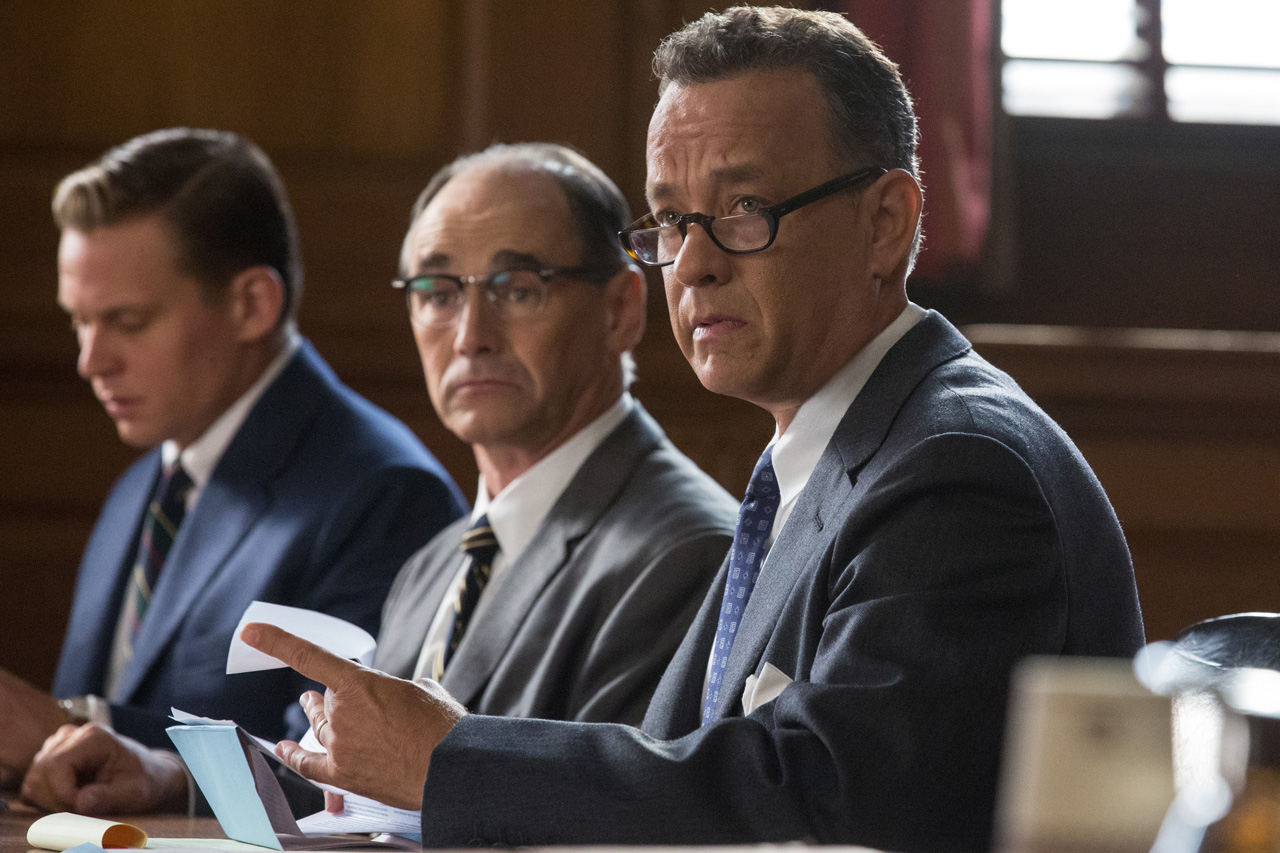 Tom Hanks stars in Steven Spielberg’s Cold War drama “Bridge of Spies,” which had its world premiere at the 53rd New York Film Festival, and received a standing ovation from the appreciative crowd. Hanks and Spielberg were joined by cast members, including Amy Ryan, Mark Rylance, Billy Magnussen, Scott Shepherd and Austin Stowell, along with screenwriter Matt Charman. The Coen brothers, who didn’t attend, also co-wrote the script.

The film’s title refers to Glienicke Bridge, which crosses what was once the borderline between East and West Germany until the Berlin Wall came down in 1989. On Feb. 10, 1962, the bridge was the site of the historical swap of two spies when the Americans exchanged Soviet Agent Rudolph Abel (a terrific star turn from Mark Rylance) for the American pilot Francis Gary Powers, who was on a reconnaissance-spying mission when the Russians shot him down.

In what is a footnote to history, an insurance lawyer by the name of James Donovan (Hanks) reluctantly took on the assignment of heading Abel’s defense and later negotiated the historical swap of the two spies, which also included the release of an American student, Frederick Pryor, at Checkpoint Charlie.

The movie paints a picture of an ordinary man – in a role that in the 50’s would have been played by Jimmy Stewart – who is determined to give even a reviled spy the best possible defense as defined by the American Constitution. During this process, the spy and the lawyer strike up an unlikely friendship and respect for each other.

On the red carpet, Hanks bypassed most of the press, rushing past reporters in an overcoat, fedora and bushy moustache like a character out of a spy caper.

Rylance, who is a big theater star in England, told reporters that the movie is an old fashioned film about ethics and humanity, and that Hanks’ character was an Everyman.

“He’s one of these people who just follows the rules, said Rylance. “He comes from a part of society we don’t respect very much, insurance lawyers. You don’t really think you’ll find an ethical hero there, but he just won’t be budged. He sees that the law should be something that works for all people, including spies, and he reminds us we mustn’t lower our standards even if we’re outraged by what our enemies do to us.” As for how he enjoyed playing his character, he told me, “I like being a spy.”

On the red carpet, Steven Spielberg mentioned that the premiere taking place in New York was meaningful to him and recalled that his last film, “Lincoln,” was screened at the New York Film Festival two years earlier. “I’m not a New Yorker, but I feel like I’m a cousin to a New Yorker,” he said, adding that the first half of “Bridge of Spies” was shot in midtown Manhattan and the Financial District.

“Bridge of Spies,” Spielberg said, was about “a tenacious bulldog of a lawyer.” He was one of the prosecutors at the Nuremberg trials in 1945, and he believed in equal justice under the law of the Constitution of the United States, and was determined to give his client every chance at a fair trial and equality as he would any citizen, despite the animosity he faced by the general public.

Asked about the relevancy of this period piece to modern audiences, Spielberg mentioned how flyovers are constantly in the news lately. “We always read about people who are spying on each other, and there’s cyber hacking and everything else that goes on today – eyeballs trying to find out what’s behind the thinking of another set of eyes – and that is exactly what was happening in the 1950’s and 60’s in the Cold War. There’s so much of that going on now that anybody can be a spy today.”

Asked whether the film will change people’s perspective of humanity, Spielberg said, “No, but the film changed my perspective and gave me a lot of confidence in people like James Donovan who knew how to do the right thing and wouldn’t stop until he accomplished his mission.”