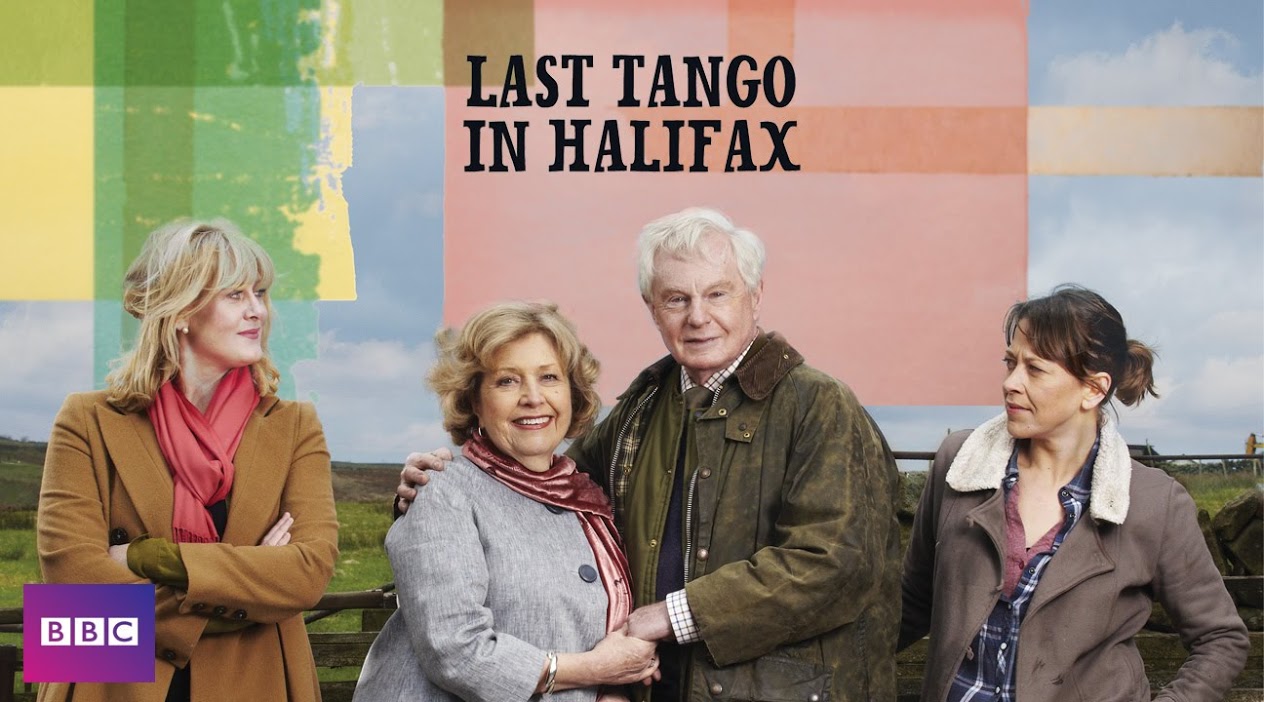 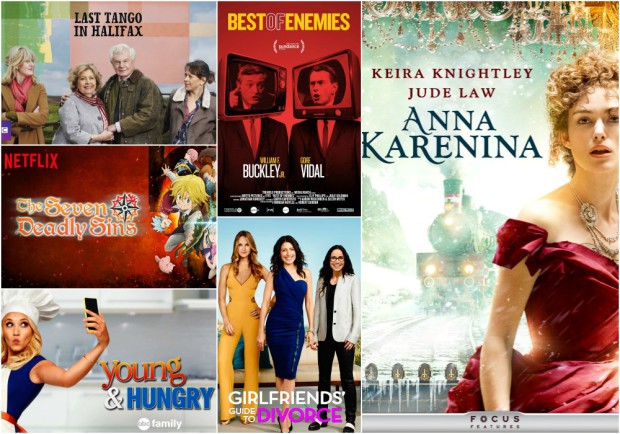 Idris Elba, Spongebob SquarePants and Robot Overloads are all hitting Netflix in November, along with a whole bunch of Netflix Originals, including Marvel’s Jessica Jones, River, and The Seven Deadly Sins. Let’s take a look at all the new Netflix titles in November. 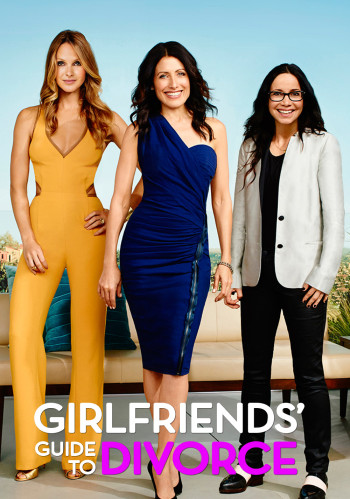 Beethoven’s Christmas Adventure (2011). Lovable, oversized Saint Bernard Beethoven tries to save the holidays when a wayward elf crashes Santa’s sleigh and loses his bag of toys to thieves.

Girlfriends’ Guide to Divorce: Season 1. After the world learns the truth about her failing marriage, a successful self-help author tries to salvage her career and find her way as a divorcée. Stars Lisa Edelstein, Conner Dwelly and Beau Garrett.

Idris Elba: Mandela, My Dad and Me (2015). In 2014, actor Idris Elba released mi Mandela, an album inspired by his time researching and portraying Nelson Mandela in the film Mandela: Long Walk to Freedom. The music of South Africa influenced him profoundly as he prepared for his role in the film. When he finished shooting the film, he decided to record some of this extraordinary music.

Pasion de Gavilanes (2003). When three brothers seek to avenge their sister’s tragic death, they become emotionally entangled with the daughters of those they hold responsible.

Robot Overlords (2015). Earth has been conquered by robots from a distant galaxy. Survivors are confined to their houses and must wear electronic implants, risking incineration by robot sentries if they venture outside. Stars Gillian Anderson and Ben Kingsley.

The Seven Deadly Sins: Season 1 – NETFLIX ORIGINAL. When a kingdom is taken over by tyrants, the deposed princess begins a quest to find a disbanded group of evil knights to help take back her realm in this anime series.

The Last Time You Had Fun (2014). Looking to escape their relationship woes, sisters Alison and Ida head out for a night out on the town. After they meet newly divorced Clark and his married pal Will at a wine bar, the four set off on a string of alcohol-fueled misadventures.

The SpongeBob SquarePants Movie (2004). When Mr. Krabs is accused of stealing King Neptune’s crown, SpongeBob and Patrick set out on a wild adventure to prove his innocence.

Thomas & Friends: The Christmas Engines (2014). Thomas and his friends are in holly, jolly Christmas spirits, ready to be Santa’s engine helpers. Percy brings holiday fun to Reg at the scrap yard, while Duncan tries to overcome his bah humbug attitude. Thomas clears the snowy tracks so Connor can race passengers home in time for the holidays.

Twinsters (2015). This documentary chronicles the true story of a French fashion student who discovered via the Internet an identical twin she never knew existed.

Worst Year of My Life, Again: Season 1. After a school year filled with humiliation, bullying and girl trouble, a boy awakens to find that time has reset itself and he must relive it all.

Last Tango in Halifax: Season 3. Childhood sweethearts Alan (Derek Jacobi) and Celia (Anne Reid), both widowed and in their 70s, fall for each other all over again when they’re reunited over the Internet after nearly 60 years. As their lives collide for a second time, the couple laments what might have been.

Do I Sound Gay? (2014). Seeking to explore his self-doubt and curious about other men’s discomfort with “sounding gay,” journalist David Thorpe helms this candid documentary about his research into the matter, which includes interviews with a host of gay celebrities.

Julius Jr.: Season 2. Paul Frank’s fun artwork comes to life in this show that follows monkey Julius Jr. and his friends as they explore the world and help each other out.

The Midnight Swim (2014). After Amelia Brooks (Beth Grant) dives into the deep waters of Spirit Lake and never resurfaces, her three daughters go there together to hunt for an explanation. Instead, the mysteries of the lake only grow deeper once the women arrive.

Amapola (2014). The turbulent backdrop of the 1962 Argentinian military coup and the 1982 war for the Falkland Islands.

Amour Fou (2014). After his cousin declines his bizarre request to join him in a double suicide, melancholy writer Heinrich von Kleist meets the married Henriette Vogel, who over time becomes receptive to the same fateful proposal.

The Runner (2015). In the aftermath of the 2010 BP oil spill, an idealistic but flawed politician (Nicolas Cage) is forced to confront his dysfunctional life after his career is destroyed in a sex scandal.

Master of None: Season 1 – NETFLIX ORIGINAL. Meet Dev (Aziz Ansari), a 30-year-old actor in New York who has trouble deciding what he wants to eat, much less the pathway for the rest of his life.

LeapFrog Letter Factory: Great Shape Mystery (2015). Set off to unlock the secret of Quigley’s new machine, and explore shapes and fractions with the LeapFrog friends. 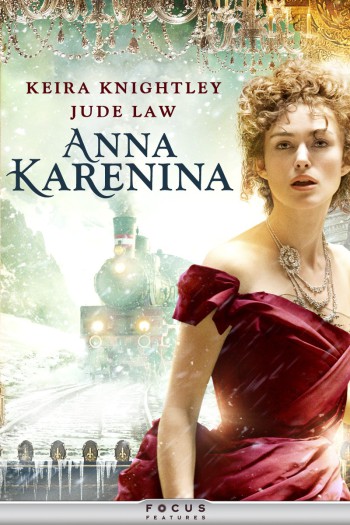 Anna Karenina (2012). Keira Knightley stars as the titular 19th-century Russian aristocrat who enters into a forbidden love affair with the well-heeled Count Vronsky.

Call Me Lucky (2015). Flame-throwing comic and social critic Barry Crimmins shocked and delighted audiences for decades with his caustic view of America and its leaders. Over time, his rage would give way to a calmer but committed life as a peace activist.

With Bob and David: Season 1 – NETFLIX ORIGINAL. After being dishonorably discharged from the Navy Seals, Bob and David are back serving our country the way they do best — making sketch comedy.

Young & Hungry: Season 2 – New Episodes. A female food blogger is hired as a personal chef by a young tech tycoon and faces a new menu of challenges, both inside and outside of the kitchen. Emily Osment stars in this ABC Family TV series.

Blue Caprice (2013). In their lead-up to the 2002 Beltway sniper attacks, John Muhammad and Lee Malvo embark on a coast-to-coast trip, forming a deadly bond along the way.

Dior and I (2014). In this behind-the-scenes peek at the demanding world of fashion, Christian Dior artistic director Raf Simons designs his first couture collection.

Continuum: Season 4. Kiera Cameron is a police officer in 2077 swept along when a gang of condemned terrorists escapes their sentences by traveling back in time to 2012.

Jessie: Season 4. Texas teen Jessie (Debby Ryan) moves to the Big Apple to follow her dreams and finds a job as a nanny for a high-profile family with four high-energy children.

People, Places, Things (2015). When graphic novelist Will Henry discovers his wife’s infidelity, it sends him into exile from his family. Living in a tiny apartment, Will is too depressed to write and can’t let go of his ex — until a student challenges him to move forward.

Soaked in Bleach (2015). With mystery still clinging to grunge icon Kurt Cobain’s death, this intriguing docudrama examines the case from the perspective of a private eye hired by Courtney Love to find her husband after he left a rehab facility days before his demise.

Tengo Ganas de Ti (2012). In this sequel to Tres Metros Sobre el Cielo, Hache slowly begins to get over his ex-girlfriend Babi when he meets the vivacious Gin.

Cristela: Season 1. In her sixth year of law school, Cristela is finally on the brink of landing her first big (unpaid) internship at a prestigious law firm. The only problem is that her pursuit of success is more ambitious than her traditional Mexican-American family thinks is appropriate. Breakout comedian Cristela Alonzo stars in this hilarious comedy about laughing your way down the path to the new American dream.

River (2015) – NETFLIX ORIGINAL. John River is a brilliant detective whose fractured mind traps him between the living and the dead.

LEGO Ninjago: Masters of Spinjitzu: Season 3. Kai, Jay, Cole and Zane must master their elemental powers and Spinjitzu weapons to protect the land of Ninjago, which also has an underworld.

Sin Tetas No Hay Paraiso (2007). Catalina starts working out around the neighborhood to get in shape, but what she really wants are breast implants.

The Red Road: Season 2. In the wake of a terrible tragedy, a local sheriff forges a fateful alliance with a member of a Native American tribe, begetting grave consequences. Martin Henderson and Jason Momoa star in this Sundance series.

Ultimate Spider-Man: Season 3. Peter Parker (voiced by Drake Bell) comes of age in an epic tale that finds him torn between his teenage life and a war between SHIELD and villain Norman Osborn. Chi McBride and Ogie Banks also voice characters in this animated series on Disney XD.

Liv and Maddie: Season 2. After four years in Hollywood as a television star, Liv returns to Wisconsin to discover that either she — or her family — has changed. Dove Cameron stars in this Disney Channel series.

Home (2014). On the run from cosmic enemies, a band of aliens arrives on Earth looking for a safe haven, but one of them inadvertently gives away his location. As the extraterrestrial refugee desperately tries to avoid capture, he begins learning about humans. Jim Parsons and Rihanna voice characters in this cute family movie.

Switched at Birth: Season 4. In this dramatic family series, two teenagers discover they were accidentally switched at birth, setting off a chain reaction of life-altering events. Vanessa Marano and Sarah Stouffer stars in this ABC Family series.

A Perfect Man (2013). Nina thinks her husband, James, is cheating on her, and she sets out to prove it by calling him and pretending to be another woman.

Best of Enemies (2015). In 1968, two patrician intellectuals with opposite political views — William F. Buckley Jr. and Gore Vidal — participated in a series of televised debates that shocked America with their level of vitriol, as recounted in this riveting documentary.

The Best Offer (2013). An auction house owner who lives in seclusion amid a collection of female portraiture is drawn to an enigmatic client who refuses to meet in person.

Electric Boogaloo: The Wild, Untold Story of Cannon Films (2014). This affectionate tribute to movie producers Yoram Globus and Menahem Golan recounts their purchase of Cannon Films and the studio’s rebirth as the 1980s’ top provider of bad B-movies, all churned out on shoestring budgets.