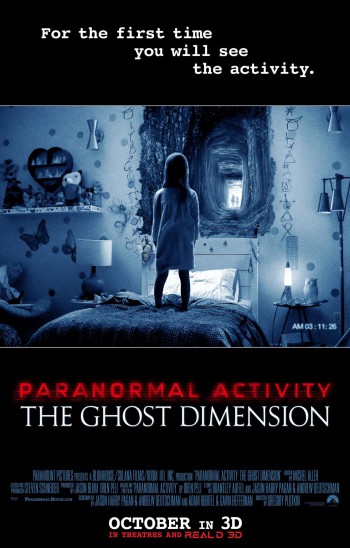 New movies opening in theaters this week include a new “Paranormal Activity” installment, Vin Diesel as a “Witch Hunter,” Bradley Cooper as a chef and lots more.

This sixth and last movie in the franchise (rest assured there will be more) follows the supernatural occurrences that take place in a home in Palo Alto, California. Newly moved into the home, the family of four includes game developer Ryan; his stay-at-home wife Emily; their 6-year-old daughter Leila; and Ryan’s younger brother. The brothers find 20-year-old video tapes of young Katie and Kristi being taught supernatural abilities by their grandmother — and Katie breaks the fourth wall by noticing the brothers’ presence.

They also find a camera that can “see” paranormal phenomena unseen by the human eye. With Leila being targeted by supernatural forces, Ryan must find a way to protect his daughter before it’s too late. Directed by Gregory Plotkin and produced by Jason Blum and Oren Peli, this movie stars Chris J. Murray, Brit Shaw, Ivy George, and Katie Featherston.

Did you know that witches live among us? Yes, it’s true! At least according to this movie centered on armies of witch hunters battling the unnatural enemy for centuries. Kaulder (Vin Diesel) is one of those hunters, a valiant warrior who manages to slay the all-powerful Witch Queen, decimating her followers in the process. In the moments before her death, the Queen curses Kaulder with her own immortality, forever separating him from his beloved wife and daughter in the afterlife.

Today, Kaulder is the only one of his kind remaining. He’s spent centuries hunting down rogue witches, all the while yearning for his long-lost loved ones. However, unbeknownst to Kaulder, the Queen is resurrected and seeks revenge on her killer, causing an epic battle that will determine the survival of the human race. Directed by Breck Eisner, this movie stars Vin Diesel, Elijah Wood, Michael Caine and Rose Leslie.

This powerful drama centers on the women who were willing to lose everything in their fight for equality in early 20th Century Britain. Carey Mulligan plays Maud, a working wife and mother whose life is forever changed when she’s secretly recruited to join the U.K.’s growing suffragette movement.

Galvanized by the outlaw fugitive Emmeline Pankhurst (Meryl Streep), Maud becomes an activist for the cause alongside women from all walks of life. Inspired by true events, this movie explores the passion and heartbreak of those who risked all they had for women’s right to vote – their jobs, their homes, their children, even their lives. Directed by Sarah Gavron, this movie also stars Helena Bonham Carter and Brendan Gleeson.

JEM AND THE HOLOGRAMS

Based on the 1980s TV series, this movie follows a small-town girl (Aubrey Peeples) who catapults from underground video sensation to global superstar. Jem and her three sisters take the world by storm when they learn that the key to creating your own destiny lies in finding your own voice. Directed by Jon Chu (“Step Up 3D”), this movie also stars Hayley Kiyoko, Stefanie Scott, Samantha Newark, Juliette Lewis, Molly Ringwald, and Ryan Guzman.

A has-been rock manager from Van Nuys, California stumbles upon a once-in-a-lifetime voice in a remote Afghan cave in “Rock the Kasbah,” a dramatic comedy inspired by stranger-than-fiction, real-life events and directed by Oscar winner Barry Levinson.

Chef Adam Jones (Bradley Cooper) is a two-star Michelin chef who’s burned every bridge he’s ever crossed. To land his own kitchen and that third elusive Michelin star, he’ll need the best of the best on his side, including the beautiful Helene (Sienna Miller). This funny and emotional story is all about the love of food, the love between two people, and the power of second chances. Directed by John Wells, this movie also stars Omar Sy, Daniel Bruhl and Emma Thompson.