As a former dancer and dance teacher, I’m a connoisseur of the dance film – even the bad dance film. If the dance sequences are good, I forgive the rest. Unfortunately, “Breaking Through” is one of those movies with a lot to forgive. 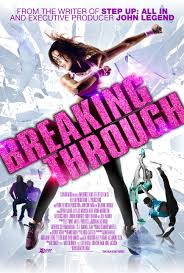 The directorial debut of John Swetnam, who co-wrote the screenplay for “Step Up All In,” “Breaking Through” is formulaic to the nth degree. The thin story focuses on Casey, played by Sophia Aguiar, who is trying to get her hip hop dance crew some buzz on YouTube.

Casey gets a shot at stardom separate from her crew and is faced with – can you guess? – the heart-wrenching decision of going for it or betraying her friends. Then, she has to figure out who she is. (In real life, Sophia is currently dancing with Britney Spears.)

It’s a movie to watch only for the dance sequences choreographed by Ian Eastwood, which are definitely worth seeing. I especially loved seeing Robert Roldan in the cast, a dancer who went far on “So You Think You Can Dance” and returns most every season as an “all-star.” Interestingly, he’s a street dancer in this film, while he’s considered a “stage” or “contemporary” dancer on SYTYCD. He’s someone who has had a lot of classical training but is, obviously, versatile.

Les Twins also make an exciting appearance in the movie. I just wish their sequence had been shot in a way that made the dance moves easier to see.