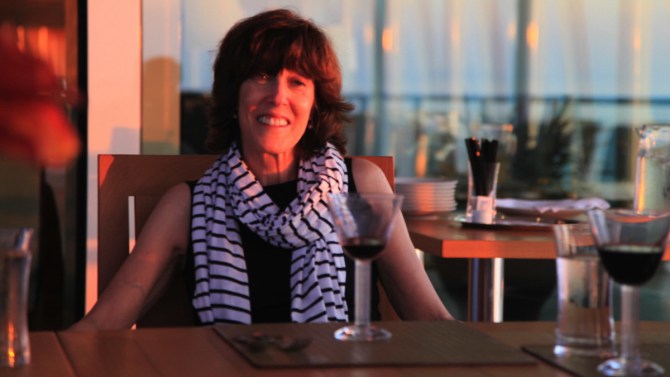 Jacob Bernstein, who is the son of Nora Ephron and her ex-husband, famed Watergate journalist Carl Bernstein, decided to make a documentary about his late mother, Nora Ephron, who died at 71 in 2012. The result is “Everything is Copy,” a moving portrait that includes a number of interviews with Ephron’s friends and family, as well as scenes from her films and clips from interviews with the likes of Dick Cavett and David Letterman. It is co-directed with Nick Hooker.

Ephron was a book author, screenwriter, and film director who brought us films like “When Harry Met Sally,” “Sleepless in Seattle,” “Silkwood,” and “Julie & Julia.”

The film’s title is a motto that Ephron adopted from her writer mother. “Everything is copy” refers to how everything that happens in your life can be used in your writing – for better or worse. She famously put her motto into practice when she wrote the book, “Heartburn,” about her marriage with Carl Bernstein. That book eventually became a film starring Meryl Streep and Jack Nicholson.

Bernstein goes on record in the documentary saying that he didn’t want the movie made and was concerned that it would cause his son, Jacob, to think less of him. Jacob admits to his father on camera that for a while, it did harm their relationship.

Ironically, Ephron did not follow her motto when she became ill with leukemia. She kept her illness from almost everyone in her life until she was near death, and many of her friends were hurt that they weren’t told.

In the film, her friend, Rosie O’Donnell, says that it was like losing someone to a car accident because the news came so close to Ephron’s death. Ephron was ill while working on “Julie & Julia,” her last film, and no one around her knew it. Meryl Streep says in the documentary that Ephron never sat down during the filming, so there was no inkling that she was tired or in pain.

Others interviewed in the documentary include Ephron’s three sisters, Tom Hanks, Liz Smith, Rob Reiner, Mike Nichols, Gay Talese, and Steven Spielberg. They speak of Ephron with great affection – some even breaking down in tears – but she could also be abrasive – especially on set when she was directing a movie.

The documentary is obviously a labor of love on the part of Ephron’s son, but he seems to take care to provide a dimensional portrait of his mother. “Everything is Copy” will be fascinating to any fans of Ephron or fans of filmmaking in general. The woman’s legacy as a writer and director cannot be denied.