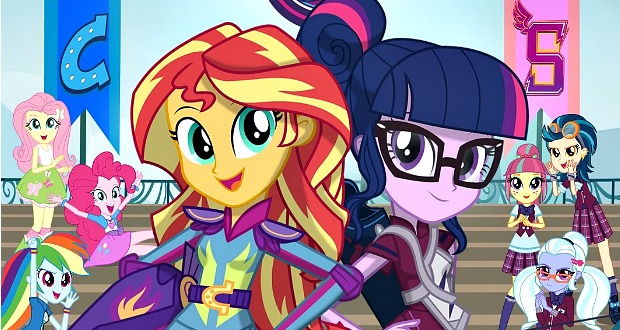 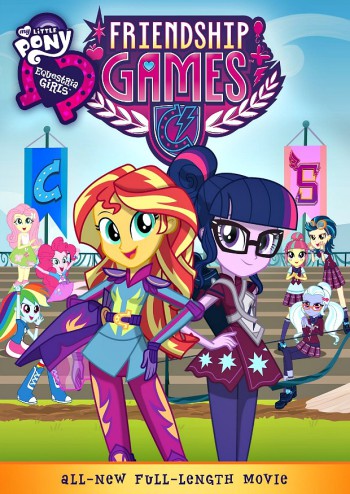 A new “My Little Pony” title from Shout! Factory hits store and cyber-shelves this week. “My Little Pony Equestria Girls: Friendship Games” is now available on Blu-Ray, DVD and digital download as of Oct. 13, 2015.

,” Twilight Sparkle’s crown was stolen from the Crystal Empire, and she pursued the thief, Sunset Shimmer, into an alternate world where she finds herself turned into…a teenage girl!

To regain her crown and return to Equestria, Twilight had to learn how to fit into this strange, new world and defeat Sunset Shimmer in a competition to become crowned Princess of the Fall Formal at Canterlot High.

But when The Dazzlings, a new girl group, arrived at CHS and convinced everyone to turn the friendly showcase into a Battle of the Bands, tensions mounted between the competing musical acts. After a reformed Sunset Shimmer realized that The Dazzlings may not be ordinary girls and were after something far more sinister than just being named Best Band at Canterlot High, Princess Twilight was called upon to help win a battle that would determine the fate of the entire school.

,” Canterlot High meets its rival school, Crystal Prep Academy, in a competition that’s a long-standing tradition – The Friendship Games: a series of exciting events that includes archery, motocross, and rollerskating. Sunset Shimmer is tasked with keeping magic out of the games to keep things fair while she and her friends compete against Crystal Prep’s top students led by someone with an equal amount of interest in Equestrian magic – this world’s Twilight Sparkle.

The super-cute story features an amazing cast, including Tara Strong, Ashleigh Ball, Tabitha St. Germain and Andrea Libman. The Blu-ray, DVD and Digital title includes deleted scenes, a new commentary, sing-alongs, and animated shorts. Beloved the world over by a devoted fanbase, the current incarnation of “My Little Pony” features smart writing (that doesn’t talk down to kids!), colorful animation, and a girl-power story that includes archery and motocross with, of course, a touch of magic.

And we have a fun quiz celebrating this week’s release! Do you go to Canterlot High or Crystal Prep Academy? Take the quiz and find out. Below that are a few clips to check out.