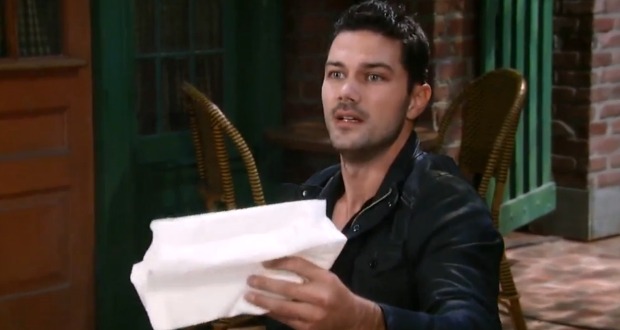 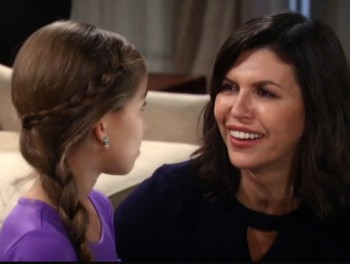 What a difference a week makes! Hello to the new GH! This week was the first week with scripts from the new writing team, and I am impressed! There was a new depth to things this week and the stories focused more on relationships, emotions, and complex thought. I’m really excited about where things are going. I’m feeling very hopeful about the direction everything is heading in.

At long last Kiki has reappeared. Now that her father is dead, her mother has betrayed her, and her boyfriend has cheated on her, she’s turned to drinking. Franco, who used to think he was her father, and Nina came to check on her and found out what was going on. These scenes were so good. Franco and Nina are going to buy Silas’s apartment and live there with Nina. Nina and Franco had some soft, romantic moments where they got closer and imagined becoming intimate. These were just perfect. The three of them bonded as a non-traditional family, and it really made me happy. I also loved how Nina kept stepping over the spot where Silas died – hysterical. Clearly, the three of them have a lot of work as a family and there will be a lot to watch as they evolve. Excellent new story line!

Hayden and Nikolas are also an interesting new development. Hayden has overheard Nik and Laura and now knows Nik wanted to kill her and she knows Jake is Jason. And the girl is pissed. She is plotting complex revenge against Nik, which seems to involve lingerie and new outfits. Another great story line to keep an eye on as Hayden has a new glint in her eye and is definitely devious. Fun!

While Nik and Hayden are getting closer, Jake and Sam have broken into Windermere to try to figure out who Jake really is. Laura convinced him he needed to know before marrying Elizabeth. They’ve had two close calls so far but haven’t been caught yet. Sam downloaded the contents of Nikolas’s computer in the hopes of finding something.

Since Laura has gotten back in town, she’s stuck her nose in many areas. She almost told Sam about Jake, but then pretended she was stopping by to ask Patrick to be her neurologist (because I totally pop by doctors’ houses and ask them to take my case).

She’s also telling half the world who Jake is by mistake. Hayden overheard her with Nikolas and as she was berating Liz, little Jake overheard so he now knows Jake is Jason and is his father. There’s definitely some darkness approaching for this kid, who is clearly about to have a psychotic break. Elizabeth, a medical professional, saw no reason to get him to a child psychologist after he had been held in solitude on an island for four years because he “seems fine.” Genius. There’s going to be hell to pay for this one, I can just feel it. Thank you to the new writers for seeing the untapped potential in this situation. It was glaringly overlooked.

Sabrina is pregnant but hasn’t told anyone. Just in time, too, since the actress playing her is pretty far along in her own pregnancy – they’re already hiding her behind big bags. She hasn’t told Michael yet because Michael is too busy being mad at Tracy who is trying to get him to distance himself from Sonny. We had a Felix sighting this week! Felix says he is happy with paparazzi Donny – well, let’s see it!

In a whole comedy of errors, Valerie ended up with Sabrina’s pregnancy test kit, which Nathan found and promptly gave to Dante who accused her of being pregnant. She denied it and tossed it but then Maxie stumbled upon it in the trash. The whole Dillon/Lulu/Dante/Valerie four square dance is about to explode. Dillon has come clean about his feelings for Lulu and kissed her. Dillon also knows Valerie slept with Dante. Nathan also knows, which means Maxie will soon know (my guess is she quizzes him about the pregnancy test and he spills it).

Hold onto your hats, Port Charles! This will probably all implode as soon as Lulu gets pregnant with her and Dante’s last remaining embryo. (They’ve agreed to try, and I’m thinking there has to be some funny business with that embryo since it was last in the hands of the Cassidines) Let’s not forget that the film student working with Dillon accidentally filmed his entire talk with Valerie where everything was admitted and Dillon brushed him off with questions, telling the guy to use what he wanted. Yikes.

Speaking of pregnancies, Olivia has brought Leo to town (thank you, new writers – no way would she leave her baby in Bensonhurst for months) and had to lie to Julian and say she adopted a baby named Matteo. This lie will undoubtedly blow up since it’s going to be hard for Olivia to call Leo Matteo. Where’s Ned, though? I love Ned. Wally Kurth is busy on another soap and probably is gone for now, sadly.

There was a really well done scene this week with Emma, Anna, and Sam. Emma spoke up like a real child would with questions about Sam and Patrick’s wedding. Since Robin came back from the dead at Patrick’s wedding to Sabrina, she wonders if this will happen again with Jason or with Robin coming back to town. The kid is smart enough to note that no marriage lasts forever – not on a soap, kid! This is the kind of writing that has been missing. It was emotional, authentic and thoughtful, and showed people really connecting to each other.

Sonny has survived the embolism surgery but is paralyzed from the waist down. He’s agreed to marry Carly, though, and has also found out Ava has Avery. He’s none too happy about that. Cue dangerous suspense music.

Julian and Alexis got it on in a hotel room, and Julian then gave her a photo album he and Molly made. This was a way for the writers to clear the way for them to be able to live together. If Molly forgives him, it’s all clear. His charges were dropped by the police and Alexis asked him to move in. She’ll probably clear out a whole drawer for his teeny tiny boxer briefs.

This was a good week for clothes! I liked Nina’s blue and pink flowered dress a lot. Maxie’s striped skirt and also her lace-up yellow floral top were cute. I loved Hayden’s black blouse with black lace sleeves but I was horrified by her army green garbage bag with a zipper dress earlier in the week. Definitely a wardrobe don’t.

I’m very excited to move forward with the new writers. If this week is any indication, things are going to just get better and better. I hope to understand Paul’s motivation for taking over the mob in Port Charles. It seems like he could have a nice little life as DA and living with the Qs, so why is he doing it?  I’m hoping we find out what is going on with Lucas and Brad and Rosalee – they have been very absent lately. Will Sonny be able to walk again? I know we are in for many wheelchair scenes where he gets mad and throws glasses around the living room (I hope no one walks around that set barefoot).  What is happening with the AJQ clinic? Is Michael too mobbed up to care now?

And what about you, reader? What are you looking forward to finding out on GH? Sound off in the comments below!