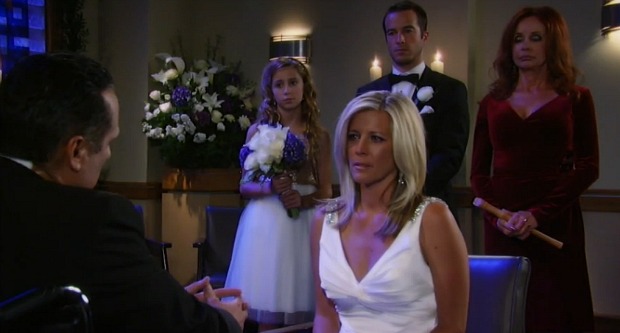 This week, we had a very General Hospital wedding. Sonny and Carly finally tied the knot for the millionth time, but it was really a very sweet wedding. Sonny had it arranged in secret when he wasn’t allowed to leave the hospital to go get married elsewhere after his multiple surgeries. The family was all dressed up, waiting with the flowers in the chapel when Carly wheeled Sonny in and she was shocked. Sonny and Carly got dressed, and the ceremony was on. Lucas walked her down the aisle and she sat in a chair next to Sonny and then they proceeded to run the ceremony themselves. It was heartfelt and touching, and I enjoyed it very much.

Josslyn is back and, apparently, she’s been gone quite a while because she has SORAS’ed (Soap Opera Rapid Aging Syndrome) into a tween. There was a horrible forced joke about corn so that we could get she is still the same, but I thought it was awkward. Does this mean Spencer and Cameron will also be recast to be older? But what about Emma who now looks like a toddler in comparison? She and Patrick  and she and Anna have such great chemistry, I can’t see them replacing her. 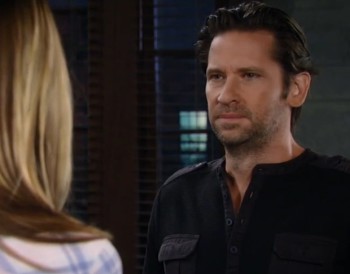 Franco and Nina moved in with Kiki, and the fireworks have begun. Nina would like to redecorate, but Kiki can’t handle seeing all traces of her father gone. Nina agreed to wait a while on the reno (someone needs to do something with that horrid gray, dingy apartment, so I can’t wait and I’m with Nina). Nina and Franco almost made it to the bedroom (after Nina admitted she’s only been with Silas), but Kiki managed to get drunk, break a bottle, and cut the bartender at the Floating Rib, so Franco had to scurry over to the PD to try to rescue her.

Nina saved the day by paying off the bartender so he would drop the charges. Kiki seemed none too pleased. I’m really liking the dynamics in this triangle. Franco is so tender with both of them. It’s still hard to align this guy with the serial murderer we used to know. I just know if I were Nina I would so jump his bones. Someone needs to haul Kiki in to get some therapy to cope with all the losses she has just gone through or she’s going to go off the deep end. There are rumors online that Kiki is actually Nina’s baby and not Ava’s, and I think that would be a fascinating twist.

The complex quartet of Valerie/Dante/Lulu/Dillon dosey-doeing with Nathan and Maxie on the sidelines continues to get even more complicated. Lulu knows Dillon is in love with her and told Dante, who then threatened Dillon to keep away. Maxie was then free to tell Nathan about Dillon’s feelings for Lulu. Dillon then dropped the bomb to Dante that he knew Valerie had slept with Dante. At this point, only Lulu and Maxie don’t know that Valerie slept with Dante. That surely won’t be the case for long. Lulu got the green light from her doctor to go ahead with trying to get pregnant. In my opinion she doesn’t seem nervous enough. The girl’s got one embryo and that’s it. You think she might be a tiny bit worried it won’t implant. Not to mention that the Cassadines did something evil to it since they had it for a while.

Ava is playing games with Morgan, asking him to come back to her and be in Avery’s life. Poor Morgan can’t seem to keep his head on straight around her and agreed he would see Avery, but wouldn’t get back with Ava. Mmm-hmm. We’ll see. She’s got the gallery open again. Paul came to give her an assignment but she got him to give her a break while she tries to keep custody of Avery (very strange that Paul agreed, in my book).

Hayden has some of her memory back – it’s unclear how much she remembers or if she has just pieced a lot of it together from when she overheard Nikolas and Laura. The girl’s got a fire in her belly, though, to do some serious manipulating. Patrick pronounced her brain healed and said she should have her memory back and needs to see Dr. Collins (who apparently is coming back to the show – maybe that means we will get to see Lucy, too??!) to be hypnotized to bring it back. Hayden flipped out over that – it seems she wants to control the dissemination of her memory herself. Elizabeth isn’t buying it and accused her of remembering things and not telling. Poor Elizabeth is like a woman in a sinking ship, furiously bailing as the water rises above her head. She’s just got no chance of keeping this genie in the bottle. Hayden made sad faces at Nikolas about needing a job, and he hired her for ELQ. Hayden then got on the phone with someone to say “I’m in.” Oh, a co-conspirator! So fun.

Sam and Jake broke into Windermere, copied Nikolas’s hard drive to try to learn Jake’s real identity, and had some hijinks up by the parapet. Sam, of course, needed to be carried by Jake after spraining her ankle. Sam called in one of my favorites, Spinelli, to come open the files. He arrived looking very strangely dapper in a vest and without baby Georgie. Maxie apparently is fine without seeing her kid. Spinelli found that Nik had a DNA test done on Jake and is going to hack into the lab to find out what it says. He and Sam shared a bittersweet moment commemorating the anniversary of the “death” of Jason. This was a wonderful moment and recalled how close he and Jason were and how much Jason meant to him. Thanks, GH writers. Jake, meanwhile, blows over to Windermere to demand Nik tells him who he really is and mentions the DNA test.

Last week, Olivia made up a story about adopting a baby to tell Julian when he saw her with Leo. Alexis was immediately suspicious when she heard about this and then when she saw Olivia and baby Leo/Matteo, she swiped his pacifier. Oh Brad? Can you run a DNA test? Olivia’s plan never made much sense to me. Would everyone have to call this kid Matteo? Wouldn’t Julian get suspicious in about two years when he hears Olivia chasing after him saying “Leo, come here!”

Paul used Sloane’s phone to text Anna, telling her Sloane was leaving and she wouldn’t see him again to get her to think Sloane has just left forever when, in fact, he is dead. Paul continues to let Anna think he believes she didn’t kill Carlos when he knows that is not true. He’s enjoying that cat and mouse game. Anna is having trouble dealing with things and asked Patrick for a sleeping pill. She is still haunted by Carlos. I appreciated seeing this kind of deep character work – it was missing for so long. Of course Anna is haunted by all of this, and it’s right to show it.

Suddenly a body washed up (presumably Sloane) with Carlos’s wallet and it’s been in the water about two weeks. This is a pickle since Anna knows it isn’t Carlos but everyone will now close the case on Sonny’s shooting. Sabrina, who is pregnant but hasn’t told Michael yet, collapses in tears when she hears Carlos is dead. There was a quick little flashback to Sabrina and Carlos kissing, which I do not remember, so I am thinking this might mean the baby is actually Carlos’s? I don’t remember exactly how long it’s been since he was killed though, so maybe I’m wrong.  If it is actually his baby then everyone, including Sabrina, has been completely blind or assumed she was eating too many bon-bons since Teresa Castillo announced her pregnancy in July and is pretty big at this point.

Tracy showed up to console Sabrina about Carlos and figured out she is pregnant. Their talk was another nice moment. I particularly loved how she told Sabrina that Michael would help her carry the burden and the joy. Wise, wonderful words – the kind that has been missing from GH for so long. Sabrina is freaked out since her last baby died, which is making it hard for her to accept this pregnancy.

We had some Felix sightings this week, which I always appreciate but I still want to see him and his new boyfriend. And, GH, I am WAITING to find out what is going on with Brad and Lucas and this whole situation they need to fix so they can get married. This storyline has been stalled too long.

My big wardrobe pick for the week was Carly’s wedding dress. I liked this so much better than that beaded blue thing she wore to the first wedding. The blue one was a pretty dress but it made her look poochy. This gown was stunning with crystals on the shoulder straps, twists in the front and a narrow train. Gorgeous.

I also liked the deep purple dress Sabrina wore to the ceremony. Tracy’s blue patterned jacket was pretty. And Maxie’s black glittery jacket was also very cute. I am so not a fan of the super bleach blonde hair with the black hair underneath it, though, that Maxie is sporting. And I don’t know what was up with Spinelli’s outfit, but it was totally not him – hipster colored jeans and a metro vest. Not to mention a very rock star hairdo. Way too fancy for the Jackal. He’s a jeans and t-shirt with flannel shirt kind of guy. And Sam. Oh, Sam. Honey, button up that shirt. Try to be somewhat subtle.

So, GH, we’ve got some interesting things in the works for sure. At this point I’m trying to figure out HOW the Jake/Jason reveal will come since there are so many avenues for it, but that won’t be for about three more weeks. Can we continue to wait that long? Is Sabrina really carrying Michael’s baby? When will Lulu finally find out that Dante cheated on her, and will it put their hoped for pregnancy at risk? Will Dr. Collins have time for all the patients lining up at his door (Hayden and Anna, for sure, but I think little Jake needs an appointment and big Jake is probably going to need some help once he finds out who he is)? Will the AJ Quartermaine clinic ever happen, or is this going to be another Deception Spa that just vaporizes?