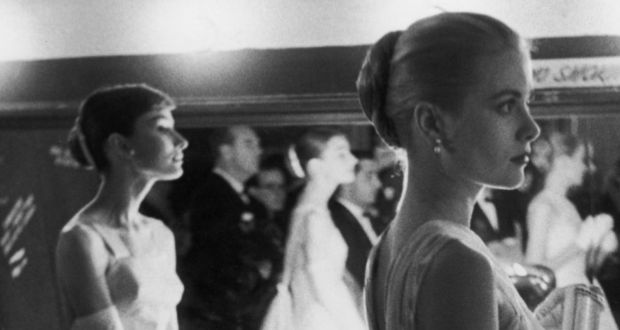 Check out this gorgeous photo of Audrey Hepburn and Grace Kelly backstage at the 28th Annual Academy Awards on March 21, 1956. This is pure, classic, elegant Hollywood. Look at those dresses!

Neither were nominees at the event, which took place in the RKO Pantages Theatre. However, Grace Kelly presented a Best Actor Oscar to Ernest Borgnine for “Marty

,” and Audrey Hepburn presented the Best Picture for the same film.

,” and Jo Van Fleet won the award for best supporting actress for “East of Eden

But neither of these women were slackers at the time (obviously!). In the previous year, Grace Kelly won the best actress Oscar for “The Country Girl

.” The year before that, Audrey Hepburn won the best actress Oscar in “Roman Holiday

The photos here were taken by Life magazine photographer Allan Grant, who incidentally was the last person to photograph Marilyn Monroe before she died on August 5, 1962. He was also the first to photograph Marina Oswald after the assassination of John F. Kennedy in 1963.

So much history embedded in these iconic photos.