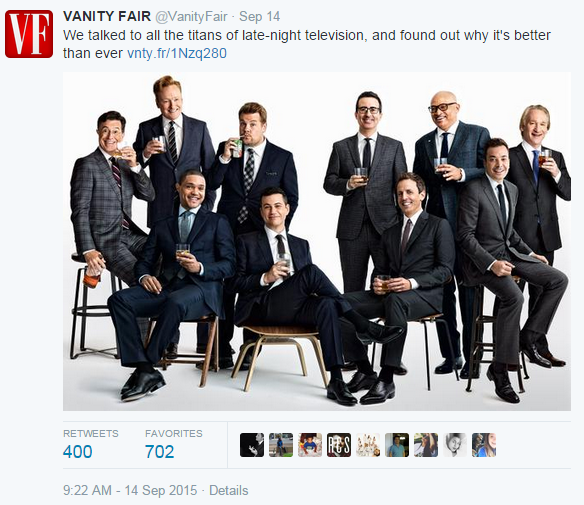 Vanity Fair recently published a piece documenting the reigning “titans” of late night television.  Notice anything wrong with this picture?  I mean, I guess the lack of a single woman in the photo makes perfect sense if you’re Jerry Lewis, Adam Carolla, or Christopher Hitchens and still believe that women aren’t funny, right?

The glaring lack of a single female presence was hilariously emphasized by twitter user Sebastian Nebel, who remarked “I’ve looked at this @VanityFair photo for too long and now I’ve forgotten what women look like.” Also notable is how similarly the photograph looks like an advertisement for a less-sexy Mad Men rip off, a show whose characters are totally not sexist at all.

While many women have made the leap to daytime television including Oprah Winfrey, Chelsea Handler, and Ellen DeGeneres, we’ve yet to see any make the leap to a more topical late night television show.

So, since the entertainment industry as a whole isn’t ready to embrace female journalists, writers, and comedians in late night television, here’s a compilation of lady titans whose television shows I would totally watch.

What is not to love about this woman? Gaining much of her exposure during her long stint on the sketch comedy show, Saturday Night Live, she has since starred in Wet Hot American Summer, Parks and Rec, and Mean Girls. She’s also penned a book to fill the hole in the Amy Poehler shaped hole in our hearts. The dream of seeing Poehler on late night television was almost realized, as last year Comedy Central asked Poehler to become the new host of The Daily Show after news that John Stewart would be leaving, to which she replied with the fastest “no” in history.

Wherever Amy Poehler is mentioned, Tina Fey is sure to follow. The sketch comedian turned television show producer has made audiences laugh since her early career at SNL, and has kept the laughs coming with her book, Bossypants, and television series 30 Rock. Personally, I would love to watch a late night show where we hear details about her daughter trying to choke her to death, and the number of tater tots she’s eaten this week.

My love for Shonda Rhimes knows no bounds. Rhimes is a powerhouse in the television industry, creating and writing three television shows which feature complicated and normalized female characters. Though certainly not a comedian by profession, Rhimes would be an excellent addition to the late night docket, as she is unafraid to tackle current events, and has a proven track record of pulling the plug on problematic actors.

Mindy Kaling won audiences over with her role as the slightly vapid, yet weirdly personable Kelly Kapoor on The Office. Since then, she’s written two books, while simultaneously writing and starring in her own television series, the first woman of color to ever do so. Aside from being an absolute riot to talk to, Kaling’s wardrobe choice would certainly brighten up the drudge of the men’s late night suits.

The girls of Broad City would be easily the most raunchy and entertaining addition to late night television. The pair met at Upright Citizen’s Brigade theater in 2006, where they performed improv skits together. In 2009, the gang developed Broad City into a web series, providing tangible proof to their parents that their careers were going somewhere. The two achieved the seemingly impossible just years later, successfully transitioning their web series into a television show.

Since her first appearance on SNL in 2005, Wiig has been making headway in both film and television, with more than 79 acting credits to her name so far. Though perhaps best known for her outlandish performances as Gilly and Dooneese, her impression of Kathy Lee Gifford is enough for most people to hand her a mic for daytime television, IV of wine and all. 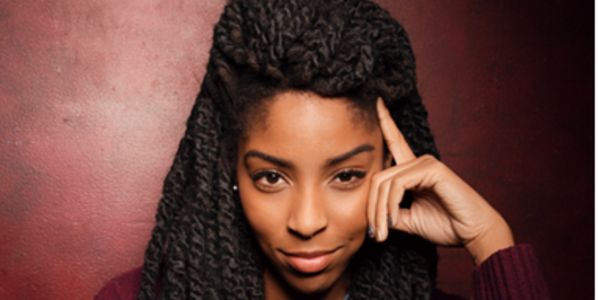 Jessica Williams on The Daily Show

With news of John Stewart’s departure from The Daily Show earlier this year, the Internet overwhelmingly stood in support of Jessica Williams taking his place as host. Who can blame them? Williams take on perspective on news is invaluable, confronting hot-button issues with a relatable, biting sense of humor and fierce intelligence. Williams declined the position, stating that she was under-qualified for the job, but we expect great things from the bright young journalist.

Laverne Cox is an actress and transgender advocate who made television history when she became the first African-American transgender woman to appear on an American reality TV show. Since then, audiences have fallen in love with her narrative on Orange is the New Black, playing character Sofia Bursett. The activist has proven to interview expertly throughout her career in entertainment, shutting down dialogues that are invasive and harmful to trans women.

The indie film starlet best known for her roles on television series New Girl, and twee manic pixie dream girl Summer Finn in 500 Days of Summer, Deschanel would be a charming and dainty addition to the late night slot. Tune in next week for Bein’ Quirky with Zooey Deschanel.

Best known for her roles as Donna Stern in Obvious Child and Mona-Lisa Saperstein in Parks and Recreation, Jenny Slate has been making audiences laugh with her over the top performances. And with recent stints on Drunk History to add to her belt, the actress proves that she would definitely not be “the woooooooooorst” at a gig hosting late night television, especially with a cocktail in hand.

For now, it looks as though we’ll have to live with the realities of having an exclusively male, mostly white voice of late night, but it’s reassuring to know that there are a variety of women out there talented enough to tackle the late night realm in the near future.

What other women would you add to the list? Sound off in the comments below!