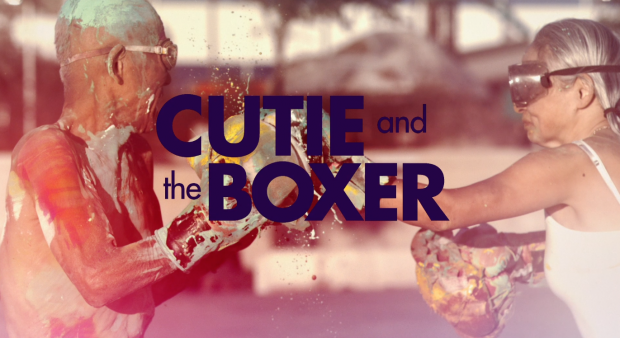 POV, the PBS documentary series, will air some award-winning films this fall that we’re excited to see. Take a look, and set your DVR.

Friday, Sept. 18​:
Cutie and the Boxer by Zachary Heinzerling​
The Academy Award®-nominated Cutie and the Boxer is a moving account of the chaotic and unconventional 40-year love affair and creative partnership between action painter Ushio Shinohara and his wife, Noriko, also an artist. Ushio, who punches canvases with paint-laden gloves, is famous in Japan and in Manhattan’s art circles, yet wider recognition has eluded him. Noriko, 21 years his junior, put her artistic ambitions on hold to be a wife and mother—and an assistant to her demanding husband. Now, Noriko’s acclaimed “Cutie” series of drawings, depicting the relationship between the title character and a volatile figure named Bullie, is turning their world upside down. Watch a trailer here.

Monday, Sept. 21:
Don’t Tell Anyone (No Le Digas a Nadie) by Mikaela Shwer
Since the age of 4, Angy Rivera has lived in the United States with a secret that threatens to upend her life: She is undocumented. Now 24 and facing an uncertain future, Rivera becomes an activist for undocumented youth with a popular advice blog and a YouTube channel boasting more than 37,000 views. She steps out of the shadows a second time to share her story of sexual abuse, an experience all too common among undocumented women. Don’t Tell Anyone (No Le Digas a Nadie) follows Rivera’s remarkable journey from poverty in rural Colombia to the front page of The New York Times. Watch a trailer here.

Friday, Sept. 25:
Art and Craft by Sam Cullman and Jennifer Grausman, co-directed by Mark Becker​
Mark Landis is one of the most prolific art forgers of the modern era—and he isn’t in it for the money. In the last 30 years he’s copied hundreds of pieces, from 15th-century icons to works by Picasso and even Dr. Seuss, then donated them to museums across the country. When a tenacious registrar discovers the ruse, Landis must confront his legacy and a chorus of duped professionals. But he is a diagnosed schizophrenic, driven to escape “the life of a mental patient,” and ending the con isn’t so simple. A cat-and-mouse caper told with humor and compassion, Art and Craft uncovers the universal in one man’s search for connection. Named a Top 5 Documentary by the National Board of Review. Watch a trailer here.​

Friday, Oct. 2
​Ai Weiwei: The Fake Case by Andreas Johnsen​
Ai Weiwei has a serious problem with authority: The Chinese government not only kidnapped and imprisoned the world-renowned artist in a secret location for protesting its repressive policies, but after his release it conducted a show trial on baseless charges of tax evasion and pornography. The stunning documentary​ Ai Weiwei: The Fake Case dissects the persecution and shows how the government’s attempts to silence Ai Weiwei have turned him into China’s most powerful artist and an irrepressible voice for free speech and human rights around the globe. Watch a trailer here.