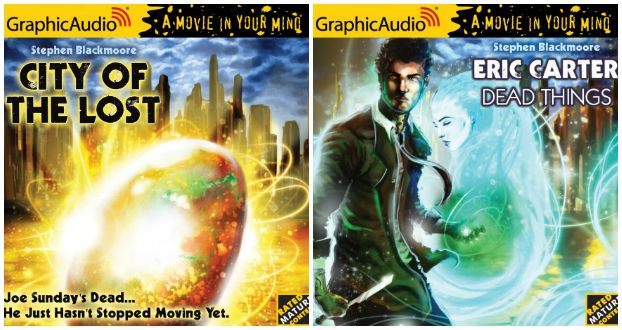 I love listening to audiobooks when I’m out walking (which I TRY to do every day, so yeah, I listen to a lot of audiobooks). But sometimes I get bored with straightforward audiobooks with just one person doing all the reading. Ok, sometimes in different voices, but still.

So I was super excited to find two CD sets by GraphicAudio that go beyond audiobooks and are actually full-fledged productions with a director and cast and are actually produced in a studio. In the case of these two titles, produced in the Washington D.C. studios of The Cutting Corporation.

Take a look at the details and be sure to check them out. I actually walk farther than intended because they’re so interesting to listen to. They’re like a movie in your mind! 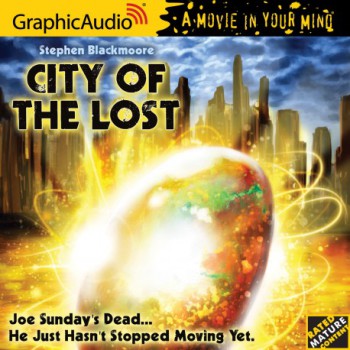 CITY OF THE LOST

Sunday’s a thug, an enforcer, a leg-breaker for hire. When his boss sends him to kill a mysterious new business partner, his target strikes back in ways Sunday could never have imagined. Murdered, brought back to a twisted half-life, Sunday finds himself stuck in the middle of a race to find an ancient stone with the power to grant immortality. With it, he might live forever. Without it, he’s just another rotting extra in a George Romero flick.

Everyone’s got a stake, from a psycho Nazi wizard and a razor-toothed midget, to a nympho-demon bartender, a too-powerful witch who just wants to help her homeless vampires, and the one woman who might have all the answers — if only Sunday can figure out what her angle is.

Before the week is out he’s going to find out just what lengths people will go to for immortality. And just how long somebody can hold a grudge. 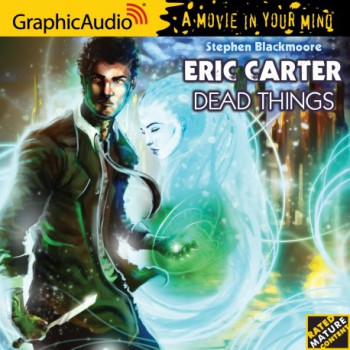 Necromancer is such an ugly word, but it’s a title Eric Carter is stuck with. He sees ghosts, talks to the dead. He’s turned it into a lucrative career putting troublesome spirits to rest, sometimes taking on even more dangerous things. For a fee, of course.

When he left LA fifteen years ago, he thought he’d never go back. Too many bad memories. Too many people trying to kill him. But now his sister’s been brutally murdered and Carter wants to find out why.

Was it the gangster looking to settle a score? The ghost of a mage he killed the night he left town? Maybe it’s the patron saint of violent death herself, Santa Muerte, who’s taken an unusually keen interest in him.

Carter’s going to find out who did it, and he’s going to make them pay. As long as they don’t kill him first.