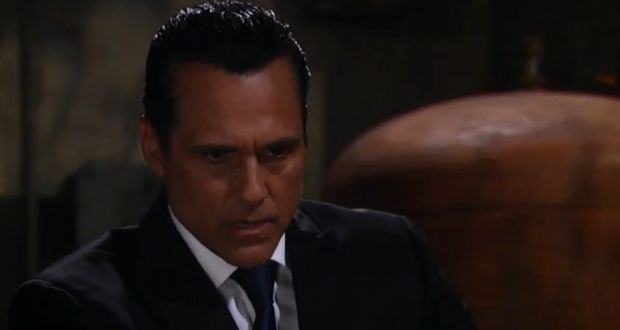 Sonny and Carly’s wedding was the big event last week, except nothing ever goes as planned. There Sonny was, cuddled up next to a roaring fire (in early September??), prepping his vows (you’d think he’d have these down since this is their 5th wedding) when he gets the news that TJ has been kidnapped. Oh yeah, and there’s no wedding cake (poor Maxie – something always goes wrong when she plans a wedding. Sam and Jason had to have Chinese food at their reception when something happened to the caterers).

Sonny runs to rescue TJ, still not really getting that Julian Jerome is not the one after him (at least that’s my opinion!). Then boom, Sonny is shot. Will Sonny make it, GH? I’m assuming so (it better be so!).

Michael agreed to come to the wedding (so much for being a Quartermaine, not a Corinthos), and Ric showed up in a spiffy new hairdo and new glasses to wish Sonny well. Over at Carly’s, Jake showed up with flowers for Carly, because that makes sense – there sure aren’t enough flowers at a wedding. I enjoyed the parallel of Carly and Sonny each having someone they are close to who can’t come to the wedding because the other person hates him.

Carly had a lovely moment with Lulu, Bobbi, Valerie, and Maxie, opening her gifts. I’m a bit confused about how one minute Carly is having her morning coffee in her robe, then the next minute she’s still in her robe and it’s night. Sudden eclipse? And don’t Valerie and Bobbi actually live in Carly’s house? If so, how is it they are arriving all decked out for the wedding like they haven’t seen her yet? These scenes always make me wonder if the bride did not consider the something old, something new requirement beforehand. If the gals hadn’t shown up with all of the items, would she have just skipped this tradition?

Sonny’s housekeeper Graciella has been on-screen a few times this week, helping get ready for the wedding. I kind of love her and I secretly believe she packs a gun in her apron. It was nice to see all three Corinthos boys together, even if they ran around like chickens with their heads cut off, not getting that Sonny was in danger. How long have these dudes been living in the mob bubble? You’d think they would smell the gunpowder before the shot is fired.

Maxie has landed the part in Dillon’s movie, but is Dillon playing opposite her? Inquiring minds want to know. And who will handle wardrobe now?

Madeline is in jail for murdering Silas, so at least we’ve wrapped this one up. Nina reamed Madeline out for the murder, while Kiki reamed Ava out for sleeping with Morgan. Morgan was certain being with Kiki would solve all his problems, but alas, she dumped him when she learned he was sleeping with her mom. Morgan promptly went on a bender, but finally agreed he would seek treatment for possible bipolar disorder. Bryan Craig did a great job playing Morgan as a hurt, sloppy drunk, and I also enjoyed the scene where Michael tried to talk him through it all on the Haunted Star.

Kristina will be coming back to PC it seems. Alexis ran off to comfort her at college after her current boyfriend dumped her. Molly will also be living at home and not dorming since there is a housing shortage on campus (um, right). But where will these lovely Davis women live? Alexis’s house burned down and she has supposedly moved into Sam’s penthouse while Sam is living with Patrick but we haven’t actually seen that. There was talk that Alexis would redecorate. I hope so! Alexis and Julian got it on in what was described in advance as a super hot sex scene which I didn’t find all that hot. Apparently, I’m just jaded.

Anna is back in town, and her first stop was to see Emma (I love those two together) on what happened to be the first day of school (I love it when the show ties in with real life things). She and Sam had an awkward convo about Sam living in Robin’s house but it was all better when Sam asked Anna to help her bring down Nikolas. Anna jumped at the chance since, apparently, the election tampering (which happened almost a year ago) has been bothering her and she’s no longer working for the FBI or the WSB or the PCPD or whoever. She told Sam of Nik’s role in the tampering (honestly, the details of this have long faded in my mind) and Sam blew out to Spoon Island to confront Nikolas.

Meanwhile, Anna met up with Sloan who has morphed back into the first actor to play the role (I guess the Silver Fox was busy), who reminds me of Jeff Rossum from “The Today Show.” Sloan said he was willing to spill the whole story about the election tampering and somehow made it out to Spoon Island just as Sam was pinning Nik in a corner about it. Tricky move, GH having Sloan change his mind about ratting out Nikolas, leaving Sam with nothing.

Hayden, meanwhile, clad in a bikini and ill-fitting cover up, suddenly remembered talking about Jake with Nikolas in the past. Hayden is beginning to suspect Nikolas does know who Jake is, though, and is seeing that Nikolas is one slippery dude. I think she kind of likes it, though – there is a glint in her eye for sure.

Wardrobe thoughts for the week: I just need Morgan to please grow out his hair. It really bothers me. I loved Carly’s dress. Too bad she will likely wear it to the hospital. I also liked Maxie’s dress and Valerie’s quasi-maternity dress (I still think she’s pregnant!).

You’ve left us with a big cliffhanger this weekend, GH. And the long weekend gives us lots of time to mull over who exactly wants Sonny dead. Is it someone we know? Someone we think is dead? I can’t wait to find out.