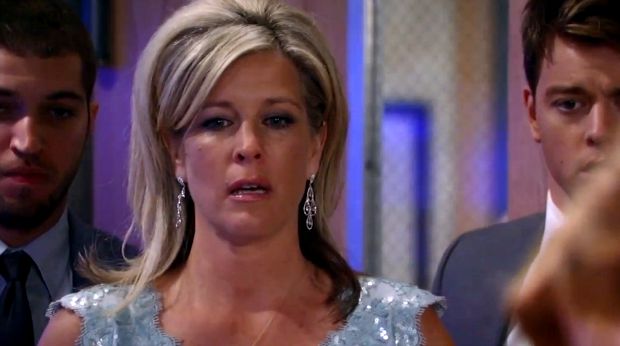 Flashback: 30 years ago on “General Hospital,” Robin came to Port Charles and 31 years ago Frisco met Felicia. Oh, how I miss those days. Frisco and Felicia were probably my all-time favorite couple.  Who was yours?

This week mostly focused on Sonny’s shooting. Instead of going to his wedding, Sonny went to save TJ. He was shot by a mystery shooter. Jake rushed in to take everyone out and hold Sonny together until the ambulance came. Sonny whispered “I knew you would come,” thinking he was Jason. Jake is puzzled by this and tells Elizabeth. She breaks down and is about to tell him he really is Jason. Is this actually going to happen, GH? Because I’m pretty sure it’s about the tenth time she has started to tell him.

Julian has been held for questioning in the shooting since he was seen on the docks by Olivia around the time of the shooting. Morgan has totally flipped out and has vowed to kill Julian in revenge, even though at this point, it seems Julian might not really be involved. Any thought of Morgan getting treatment for his bipolar illness seems to have been forgotten.

The shooting has also had fallout for Sam and Patrick’s relationship, since he’s concerned that she runs toward gunshots. Duh.

Sonny needs surgery to remove the bullet but may end up paralyzed or dead. The test results don’t look good at this point. Will Sonny pull through? Will he be paralyzed and then get stem cells or some other treatment to regenerate his spine so he can walk? Sounds like there could be a long road ahead for him. This could be an interesting storyline.

The other big storyline of the week was Anna and Sloan. Sloan told her about the election tampering, and then agreed to use it to get Nikolas to give back ELQ. Surprise! Sloan wouldn’t actually do it and instead he’s sticking with Nikolas, as long as Nik ponies up some more cash. Hayden is now in on what’s happening.

Anna originally got Jordan to agree to get Sloan immunity. Now that’s he’s backed out, he’s threatening to tell that Anna shot Carlos if she doesn’t protect him from prosecution. He says he has kept the gun as evidence. Anna had to do some tap dancing with Jordan to keep her from launching an investigation into the election. And of course she has a semi-broken heart since she was ready to jump into a relationship with Sloan.

Nikolas and Hayden had a lot of scenes, with her pressing him to find out what her secrets were. At one point they went swimming in his pool, which is unheated. Nik proudly announced he swims a couple of miles a day even in the winter in that pool. He swims in an unheated outdoor pool in upstate New York in the winter? Kind of hard to do since it would be frozen, just like my pool is here in Buffalo for many months. Who is writing this nonsense, GH?

While waiting to get news about Sonny, Maxie and Lulu warned Sabrina that Michael will never truly get away from Sonny and is always going to be loyal. Michael is now back in the fold, telling everyone he loves Sonny and he’s his father. He also stepped up to the plate and ordered some no-necks around, organizing security and getting Ric thrown out of the hospital. Sounds like Michael might end up as CEO of Corinthos Coffee, Etc.

Sabrina brought a very odd, huge, adult plastic hairband for Avery to wear to the wedding. She also just left the empty gift bag on Sonny’s bed. Strange. Avery had a good time chewing that headband and shouting “yeah!” at various times. All that poor baby wanted was to be put down and everyone kept passing her around like a sack of potatoes. She was adorable, though.

Before news of the shooting came, Valerie was feeling unwell (preggers!) so Bobbie just bailed on her own daughter’s wedding to take her home, which was so strange. And why wasn’t Lucas at his sister’s wedding, GH?

Also before news of the shooting came, Lulu went gaga over Avery and announced to Dante in front of a room of people that she wants another baby. Way to make a personal decision public, Lulu.

Paul got his divorce papers from Jenny and signed them, deciding life is too short to be unhappy or sad. Tracy was there to offer support.

The week ended with Sonny’s wedding vows falling out of his jacket at Carly’s feet. That was a touching moment. Maybe Sonny and Carly can be that forever couple I keep saying GH needs if he pulls through this?

Mostly I try to just follow the storylines without getting too wrapped up in the actors and their personal lives, but a lot has been going down lately that is worth a mention. Kelly Monaco (Sam) and Billy Martin (Jake) are dating in real life but trying to stay out of the spotlight because a lot of people are questioning if their relationship is going to impact the storyline or the amount of air time they get. It’s always interesting to watch a couple that is dating in real life react to each other on screen. The way Jake smashed Sam to the ground when Sonny was shot was done in a way so that you could just tell they completely trust each other.

The other off-screen drama is centered around Bryan Craig (Morgan), who happens to be engaged to Kelly Thiebaud (Britt). Bryan got into a Twitter dispute with a fan who was saying things about his family. Bryan’s mother has been active on Twitter defending him, which didn’t help matters.  It would have been fine except at the end of the exchange, Bryan said he would break the person’s fingers. He took the tweet down, but people are all in a tizzy over this. This comes on the heels of many people complaining about the job he has done on the show. I guess he’s a hothead in real life, too.

And some good news for an actor is that Nicholas Bechtel (Spencer Cassadine) has been chosen to star in a new Disney sitcom. He’s being heralded as the next new Disney star. That kid sure does work it and has been over the top in his role. I hope he doesn’t leave because he has been a lot of fun.

So that’s where we’re at this week. Sonny’s surgery and rehab will be the next big storyline to get through. Maybe this election nonsense will finally wrap up. And maybe, just maybe (?) Jake will learn who he is? (I doubt it – my guess is they keep that one for November sweeps). Will Ava go blond again? Will everyone finally be allowed to change out of their wedding clothes (I have no wardrobe picks since everyone is in the same clothes they were in last Friday)?

Sneak Peek: What Will Liz Reveal to Jake?