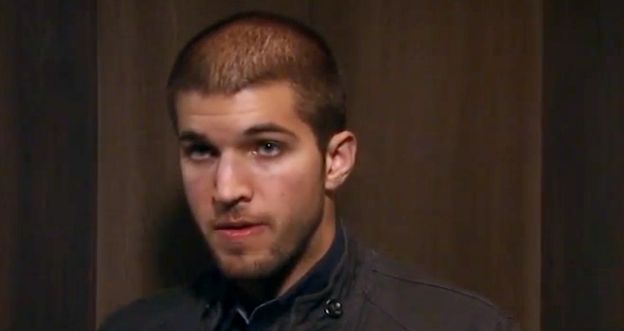 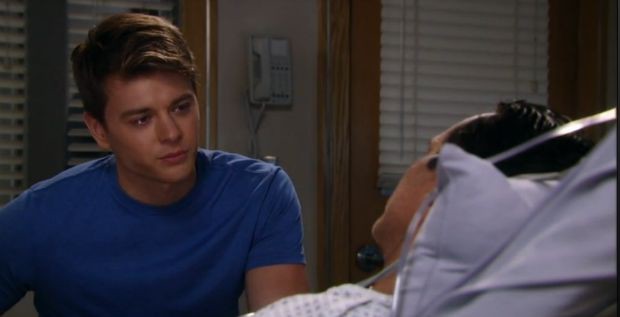 Sonny has made it through surgery (no mention of whether he has any spinal damage) to remove the bullet after the requisite close call of his heart stopping, but now the whole family is in an uproar about Morgan. Morgan got Milo (Magic Milo is back! Is he still dating Epiphany?) to give him a gun and he’s hunted down Julian at a cabin Alexis has rented. Alexis and Julian are in his crosshairs. Fortunately Michael is looking for him since Sonny was able to remember Morgan telling him he planned to kill Julian. Hopefully TJ will tell Michael where Morgan is, since he must have told Morgan where to go (after overhearing Alexis and Julian). I’m buying that Julian shot Sonny, so don’t make me regret that, GH!

The scenes at the hospital as Sonny’s life hung in the balance were done well, even though I just wanted to smack Morgan. Carly read Sonny’s wedding vows after finding them in his jacket. That was a very touching scene. It was nice to see the whole family interacting together and trying to pull together. Michael donned a muscle shirt and proceeded to give more orders to guards while he was there. Then he and Milo went off on their mission to find Morgan. It sure looks like Michael is going to get drawn into Sonny’s business.

Ava is out of jail and is back to blond again (bye-bye witchy wig). It turns out Scotty took the recording that implicates her in the murder of Connie when he left the D.A.’s office, leaving Ric with no evidence. Scotty agreed to represent Ava and was going to sell her the recording for $5 million. Her case was dismissed (unless and until the evidence resurfaces) but, surprise, surprise, the recording was stolen from Scott’s room (because you would totally leave important evidence literally under your mattress: NO ONE would ever think to look there). They think Ric arranged for it to be stolen, but I’m not so sure. It smells a little more complicated.

Kristina is back in town and it was really nice to see all the Davis girls together in one room. Thanks for that, GH. In another nice family moment, Sam, Anna, Emma, and Danny threw a birthday party for Patrick. He actually got to open and unwrap real gifts (none of those fake soap opera presents where you can lift the lid off the wrapped gift with no ripping). He told Sam he wants to marry her. And there was what looked like real lemonade being poured, although the cake was definitely Styrofoam. This party was cute and Sam gave Patrick a guitar so maybe Jason Thompson can launch a solo musical career (remember the days of actual performers being on the show?).

I liked the scene where Sam walked into her former apartment (where Alexis now lives) to find Ric watching TV with Danny. This was a really interesting moment where Ric acted vulnerable, wanting to know how Sonny was, and Sam was able to be civil to him. Surprisingly, no one has figured out that Ric is actually Clark Kent (thanks to his spiffy new glasses) and could turn into Superman at any moment. All kidding aside, I find Ric to be a fascinating character. He truly cares about the people in his life, yet he always goes down the wrong path. It’s like he’s doomed to always make the bad choices, even though he doesn’t actually mean to always be so evil.

Dillon’s movie was in trouble due to permit problems, but it turns out his dad Paul has a history with the Mayor and was able to get her to green light it. There’s definitely something up with Paul, though, because he arrived at the newly blond Ava’s doorstep for an unknown reason. Hmm, this could be fun.

Elizabeth was about to tell Jake who he is for the thousandth time, but shockingly, they were interrupted AGAIN and she then told him some old past history between her and Sam instead. Yawn. The only thing exciting about that scene was that apparently Elizabeth randomly has a porch swing hanging in the middle of her front walk.

Dante is another one who almost spilled the beans this week, but about his night with Valerie. He has decided he feels too guilty and needs to tell Lulu. Valerie, meanwhile, has confessed to Nathan that she still has feelings for Dante. Since these two hooked up on the 4th of July, if Valerie is pregnant, it’s got to come out soon.

Nina and Franco are together and moved into Ric’s room at the hotel. They let Ric know they knew he was scamming Nina and got him to sign an annulment and give Nina her money back. I’m sure these two won’t be quiet for long, though.

Wardrobe picks of the week: I loved Nina’s blue dress and Valerie’s white shirt. I also liked Tracy’s blue flowery jacket. And I loved it when Maxie said to Nathan that she felt like she had been in her dress from the wedding for a week, because she actually had been. Nice one!

Heinous wardrobe moment: Maxie in a tiny, floral romper with spaghetti straps in mid-September in upstate New York. Not exactly transitional seasonal wear, and fashionista Maxie would never don such a garment.

It feels like things are starting to heat up and some new things are cooking. What does Paul have to do with Ava? And will Paul’s history with the mayor somehow play into this election nonsense that won’t die? Is Sonny actually ok or is he going to have complications? Will some fun new storyline develop around Kristina? Will Michael tackle Morgan and get the gun away from him before he shoots Alexis and Julian? Who is going to move into the cabin Alexis rented (because GH doesn’t build a set for a few short scenes)?

Thanks for picking the pace up a bit this week, GH. I’ll be watching to see where things go from here.