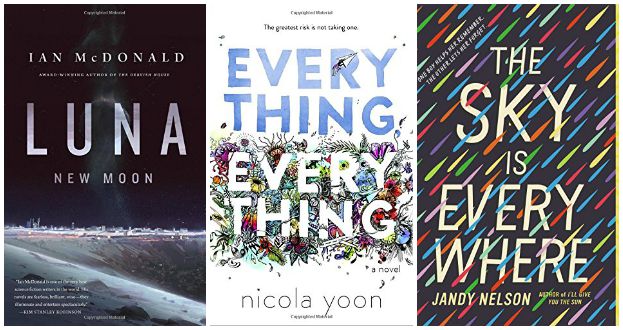 Now is a fun time to be a book fan. Books seem to be landing adaptation deals every day, and while not all of them will become films, it’s fun to watch and see what develops.

And over the past week, three incredible books landed adaptation deals.

Sci-fi fans will be delighted to hear that Ian McDonald’s “Luna,” the first in McDonald’s new series, sold to CBS Television Studios.

“Luna” is set in a future where the moon has been colonized and is run by five competitive corporate families, known as the Five Dragons. Adriana, who stole one of the industries out from the nose of one of the Five Dragon families, leaves her five children to defend her empire from their enemies and each other.

Shane Brennan will write the script and produce the show with CBS Studios.

THE SKY IS EVERYWHERE

“The Sky Is Everywhere,” a YA novel by award-winning author Jandy Nelson, follows a high school student mourning the loss of her sister.

Nelson will join the team as an executive producer. Natalie Krinsky will adapt the novel to screen.

Nicola Yoon’s “Everything, Everything” is a contemporary YA novel that released on Tuesday. Maddy, who is allergic to the world, is confined to her house, but begins to fall in love with the boy next door.

Which one of these would you most like to see adapted? Sound off in the comments below!