A press conference in New York this week for “Hitman Agent 47,” a film set for release on Aug. 21, 2015, became a bit heated when Zachary Quinto was offended by the first question posed by a reporter from the Boston Herald. Check out the exchange below, along with other comments about the film by Quinto, actors Rupert Friend and Hannah Ware, and director Aleksander Bach.

Reporter: First, for the three actors, what you felt were the biggest challenges for your roles? And for Zachary Quinto especially … as an out actor, do you find that you are the go-to guy for gay roles, and in that sense, do you see your assassin here as gay?

Publicist moderator: Can we start with the first question first for everyone?

Reporter: Yes, what you thought were your biggest challenges.

Quinto: Clearly, you thought it was being gay. I just don’t see the correlation. That’s a leap that I would never take. I feel like the separation between who we are as actors and the characters we play is what makes the whole thing interesting. So, that to me, is an outdated mode of thinking – the one that you just presented to me. So, I don’t really have an answer for you there…. Weird question, my friend.

But the biggest challenge, I think, in this film – the stamina, the action, keeping everything at the level that it needs to be at in order to stay engaged with one another was a challenge that we were all happy to meet. It was good fun to work with these two.

Rupert Friend: Yeah, did you think that Hitman was gay?

Reporter: I don’t know. You could say that these two guys were having this sort of homoerotic dance…. [Laughter]

Quinto: It’s a bizarre way of thinking. We need to move on.

Hannah Ware: Yeah, so … I’m a bit distracted. [Laughter] It was a very physical role for all of us…. And the human component is what really brings the film to life and makes it not just a crossover from it being based on a video game…. It’s extremely well-written, and we have some multi-faceted characters.

Quinto [back to the reporter]: What outlet do you write for?

Quinto: I just realized, sorry, I can’t move on from the fact that … I do, I find it really borderline offensive that you would make this leap and ask that question. I find it really as a journalist sort of perpetuates these modes of thinking that have done nothing but hinder people’s progress in the world and in our industry. So, I think you have to be a little bit more mindful of how you talk to people and ask them questions because it doesn’t really make any sense.

Reporter: There is this idea, though, that some people think that it’s best or it’s wonderful when gay actors can play gay roles whereas straight actors have always played gay roles. And it is sort of uncharted territory to have a star who is an out actor.

Quinto: OK, but that’s a different question and that’s a different point. And that’s something that I could engage you on, but to just take the leap to ask me whether or not because I’m gay as an actor, the character’s gay – that’s where I find the offense, so it’s good to move on from it. I just think it was important to clarify it, and thank you for indulging that.

On the challenges of translating a video game into a film:

Aleksander Bach: I think to make this successful, if you do game adaptation, what you need first of all – it doesn’t matter if it’s a video game or not – you need a great story, and you need great characters, and you need great actors to bring it to life. When you have this and you combine it with great action and something which feels fresh, then you have a chance to put the puzzle together in a very nice way and that you create something which feels right.

I think that’s the most important thing that you have great characters that you care for. When it’s based on this game, on Hitman, and you have this cold assassin Agent 47, you also need to care for this guy. When he’s just too cold, it doesn’t work.

On whether they think an engineered hitman in the real world would be effective:

Ware, after all the guys stop and look at her: Thanks, guys! You should answer it, Rupert Hitman.

Friend: Well, I remember we were talking about it the other night. You had some interesting thoughts.

Ware: When was that?

Ware: Don’t be mean. What was the thought?

Friend: It was a good thought.

Friend: It was your thought.

Quinto: This is what it was like the whole time. [Laughter]

Bach: I have to think about this question.

Quinto: You stumped us.

Rupert Friend on exploring the Hitman video games before making the film:

I found the games very useful, particularly the later absolution game. The game-makers have clearly used an actor for the character because there was a motion-capture thing I could feel. The way that the character moved was very interesting to me. There was something very graceful about him. This is a guy who takes such pride in his clothes – the iconic suit and tie. And yet, he’s able to fight very efficiently in a very inefficient kind of uniform. That deadly grace, if you like, was at the center of something very physical for me.

When I got the role, I began training with Zachary in a boxing gym with a great guy and then … here in New York, so I was doing this very brutal, efficient, Israeli self-defense technique and trying to marry that with something a lot more balletic. 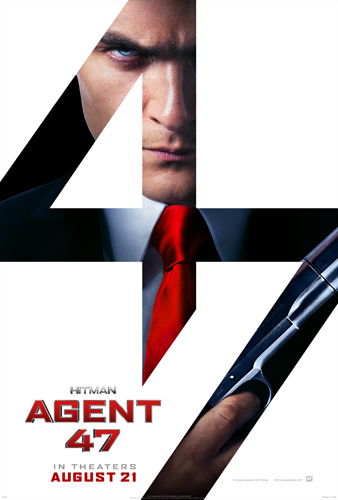 Rupert Friend on how he prepared for his character:

Yeah, I went on a killing spree. [Laughter] I get this question a lot – what is it about you and people who kill people for money because I seem to do it a fair bit? The answer is I don’t know. I think the world we’re lucky enough to work in is a world of wonderful make believe, and when you’re really given an opportunity to stretch your imagination, as we were with this movie, it tests what I think is the most limitless muscle we have as creative people, which is: Can you imagine it? And if the answer to that is yes, then can you do it? And that’s our challenge. All of us actors do that on a daily basis. Special effects people do it, and photographers do it. And it’s the single most fascinating element of the job for me. You can’t really literally prepare to play an assassin unless you want to be thrown in prison. There’s a few things you can’t prepare for in that way other than in your mind, and in that respect, it’s a leap of imagination.

Zachary Quinto on shooting in Berlin and Singapore:

Berlin is probably my favorite city after New York, and that was an incredible experience to be in a city that I’ve known so well for such a long time. I’ve been going there a while. I have friends that live there and stuff. So, to work there, to live there, and to use the city as a kind of playground for this film.

And then, the architecture of Singapore. This is the first Hollywood studio film to shoot in Singapore. That was a real milestone, I think, for all of us involved. It’s an incredibly, stunningly beautiful architectural city. And the way that Ali [Aleksander Bach] and Óttar Guðnason, our incredible DP [Director of Photography], brought that to life and put it on the screen is really sleek and dynamic and goes a long way to satisfy the appetite of gaming fans who are really used to this cinematic immersion. I think the movie brings that into focus.

Hannah Ware on her character, Katia:

Katia is introduced as a girl who’s seemingly normal and not genetically modified, so the human component is there from the outset. For me, personally, I always want to see films where it reflects some universal feelings and themes. Which writer says you need to know you’re not alone in the world? I think people watch movies to, in some way, identify with the characters. So, if there was no human component, you would be left cold, and you wouldn’t be compelled to watch.

Rupert Friend on his character, Agent 47:

I was particularly interested by the notion that this guy, who’s been genetically engineered to be “perfect” and that the flaw in that perfection might be his humanity and that his makers might consider that to be a real rogue bit of programming. And yet, if you look at it from the paradigm shift from the other side, that could also be his greatest strength. The idea that this guy who’s not supposed to have feelings or vulnerabilities, hopes, dreams, any human relations might indeed have them, and they would be considered flaws by some and actually be his greatest strength. That was interesting to me because it opens up real wonderful questions about what humanity is.