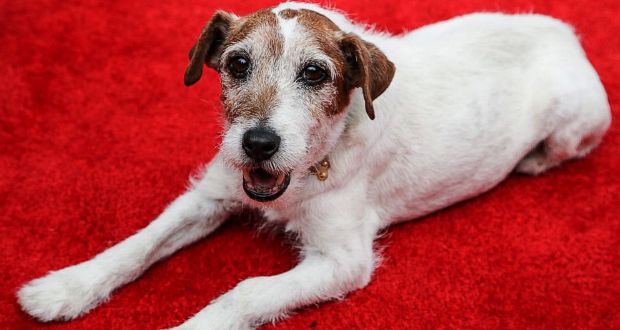 Uggie, the scene-stealing Jack Russell terrier who starred in “The Artist” with two-legged actor Jean DuJardin, has passed away, according to his trainer Omar Von Mueller, who posted the sad news on the doggie’s Facebook page:

We regret to inform to all our friends, family and Uggie’s fans that our beloved boy has passed away. We were not planning on posting anything until we healed a little more but unfortunately, somebody leaked it to TMZ and they will be announcing it. In short, Uggie had a cancerous tumor in the prostate and is now in a better place not feeling pain. Thank you for your support, I will not be reading any comments for a while as it is too painful at the moment.

Although on screen, Uggie and DuJardin seemed inseparable, in real life DuJardin may have been reluctant to share the spotlight with the hammy doggie star. In his Oscar-winning acceptance speech, he neglected to give props to his four-legged co-star, whose charisma and impressive tricks – such as lowering his head into a sort of dying Swan move – contributed immeasurably to the film’s poignancy and humor.

I met Von Mueller and Uggie at an HBO event in 2012, and the lovable terrier had lost none of his mojo. He still skateboarded and pawed all the pretty women. At that time, Von Mueller told me about Uggie’s dark past, which included a rambunctious nature and a hatred of cats.

But the doggy star’s life turned around and flourished when Von Mueller trained him and gave him a sense of purpose. Uggie retired from film soon after “The Artist” was released, but he continued to make benefit appearances – for treats, of course. Von Mueller called him a “great movie star.”

Here’s a story I wrote about my encounter with the lovable pooch.