New movies this month include a fresh take on Peter Pan, a beloved (and scary!) children’s book adaptation, and a reboot of the 1980s TV series “Jem and the Holograms.” 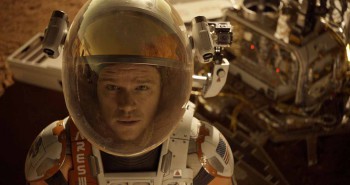 During a manned mission to Mars, Astronaut Mark Watney (Matt Damon) is presumed dead after a fierce storm and left behind by his crew.

But Watney survives and finds himself stranded and alone on the hostile planet. With only meager supplies, he draws on his ingenuity, wit and spirit to subsist and find a way to signal to Earth that he’s indeed alive. Millions of miles away, NASA and a team of international scientists work tirelessly to bring “the Martian” home, while his crewmates concurrently plot a daring, if not impossible, rescue mission.

Directed by Jared Hess (“Napoleon Dynamite”), this action comedy stars Zach Galifianakis as David Ghantt, an uncomplicated man stuck in a monotonous life. Day after day he drives an armored vehicle, transporting millions of other people’s money with no escape in sight.

The only glimmer of excitement is his flirtatious work crush Kelly Campbell (Kristen Wiig) who soon lures him into the scheme of a lifetime. Along with a group of half-brained criminals led by Steve Chambers (Owen Wilson) and an absurd heist plan, David manages the impossible and makes off with $17 million in cash. The only problem? He foolishly hands the money over to the double crossers, who set him up to take the fall.

With the bandits blowing the millions on lavish luxuries, David must dodge the authorities, evade a hilarious hit man (Jason Sudeikis), and try to turn the tables on the ones he trusted most.

Those classic childhood characters created by J.M. Barrie get a fresh take in this movie directed by Joe Wright. “Pan” follows the story of an orphan boy (Levi Miller) who is spirited away to the magical world of Neverland.

There, he finds both fun and danger, and ultimately discovers his destiny — to become the hero known as Peter Pan. Also stars Hugh Jackman as Blackbeard, Garrett Hedlund as Hook, Amanda Seyfried as Mary, Cara Delevingne as Mermaid, and Rooney Mara as Tiger Lily.

Based on the popular book series by R.L. Stine, this movie centers on teenager Zach Cooper (Dylan Minnette), who’s upset about moving from the big city to a small town, but finds a silver lining when he meets the beautiful Hannah (Odeya Rush) living next door. But Zach’s silver lining reveals a cloud when he learns that Hannah’s mysterious dad is R. L. Stine (Jack Black), author of the bestselling Goosebumps series.

And those monsters from his books are indeed real; Stine protects his readers by keeping them locked up in their books. When Zach unintentionally unleashes the monsters from their manuscripts, they begin to terrorize the town, and it’s up to Stine, Zach, and Hannah to get them all back into the books where they belong.

This dramatic thriller set against the backdrop of historic events tells the story of James Donovan (Tom Hanks), a Brooklyn lawyer who finds himself thrust into the center of the Cold War when the CIA sends him on the near-impossible task to negotiate the release of a captured American U-2 pilot.

Screenwriters Matt Charman and the Coen Brothers have woven this remarkable story inspired by true events that captures the essence of a man who risked everything. Directed by Steven Spielberg, this movie also stars Alan Alda, Amy Ryan, Mark Rylance and Sebastian Koch.

This powerful drama centers on the women who were willing to lose everything in their fight for equality in early 20th Century Britain. Carey Mulligan plays Maud, a working wife and mother whose life is forever changed when she’s secretly recruited to join the U.K.’s growing suffragette movement.

Galvanized by the outlaw fugitive Emmeline Pankhurst (Meryl Streep), Maud becomes an activist for the cause alongside women from all walks of life. Inspired by true events, this movie explores the passion and heartbreak of those who risked all they had for women’s right to vote – their jobs, their homes, their children, even their lives.

JEM AND THE HOLOGRAMS

Based on the 1980s TV series, this movie follows a small-town girl (Aubrey Peeples) who catapults from underground video sensation to global superstar. Jem and her three sisters take the world by storm when they learn that the key to creating your own destiny lies in finding your own voice. 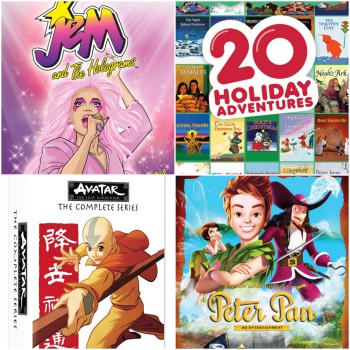 This new set from Scholastic Classics is packed with 20 tales perfect for kids and families who love to watch classic storybooks come to life. The 225-minute set includes: The Night Before Christmas, Max’s Christmas, Merry Christmas, Splat, Morris’s Disappearing Bag, Space Case, Bear Snores On, Noah’s Ark, Too Many Tamales, Lemonade in Winter, The Snowy Day, Fletcher and the Snowflake Christmas, In the Month of Kislev, Little Drummer Boy, Seven Candles for Kwanzaa, Great Joy!, Antarctic Antics, Giving Thanks, Bear Has a Story to Tell, The Clown of God, and Brave Irene.

Go back to the beginning to experience the epic saga of Avatar: The Last Airbender with this complete collection on 16 discs. From the discovery of Avatar Aang in the frozen iceberg to the mastery of all four elements, from the battle at Ba Sing Se to the final showdown with the Fire Nation, your destiny awaits as you relive all the powerful bending that will blow you away yet again.

THE NEW ADVENTURES OF PETER PAN

Soar into a colorful new adventure with your favorite hero Peter Pan, his dazzling wing-woman Tinker Bell, and the beloved Wendy, Michael and John as they whisk you off to the most magical place in the world: Neverland. When Peter discovers his beloved home is in great danger, he must gather friends from near and far to take on the infamous Captain Hook and his crew of mischievous pirates. In order to keep Neverland safe from Hook, the young heroes must fly head first into adventure and protect their right to never grow up!

JEM AND THE HOLOGRAMS: THE TRULY OUTRAGEOUS COMPLETE SERIES

In 1985, the TV series “Jem and The Holograms” premiered to the delight of young girls and boys. This animated series, released on DVD by Shout! Factory on 11 discs, centers on the dual life of beautiful Jerrica Benton, co-owner of Starlight Music, and her pop star alter-ego, Jem, lead singer for an all-girl band. With its unique combo of drama, action, romance and music, the show’s message of glamour, fashion and fame helped define a generation. Special features include: retrospective featurettes, including brand-new interviews with the cast, crew and fans; original toy commercials; video jukebox; and animated storyboards.