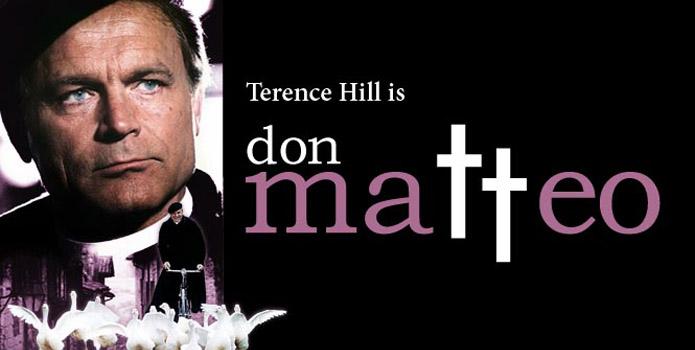 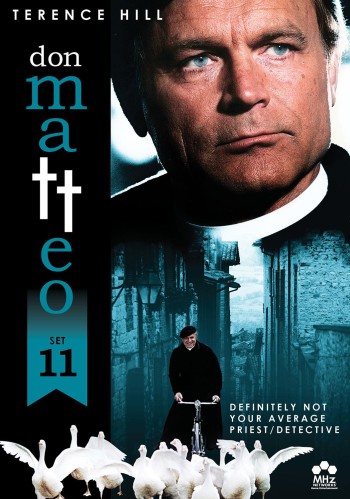 Terence Hill holds a special place in my heart, because my I’d never heard of him until my boyfriend (now husband) introduced me to him way back when we first got together in the 1970s.

Hill, whose birth name is Mario Girotti, was born on March 29, 1939 in Venice, Italy to a chemist. His mother was German, and as a child, the family lived near Dresden, Saxony, Germany where they survived the Allied bombings of World War II.

Hill has been working since 1953, and is famous for the spaghetti westerns he made in the 1960s and 70s, like my husband’s favorites, “My Name is Nobody” and “They Call Me Trinity.” Gosh, what a long career this guy has had, including many films with frequent collaborator Bud Spencer.

MHz Home Entertainment sent me “Don Matteo” Sets 11 and 12 (both 4-disc sets), and it’s a thrill to see this actor whose been a household name for us for the past 40 years! He looks great, and the TV series is very entertaining. MHz Networks has a great catalog of crime and mystery titles, including “Don Matteo.” Check out their YouTube channel and streaming service. 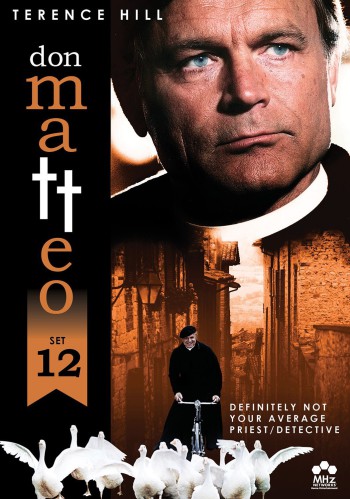 Of note is that this is the first TV series where Hill can be heard in his own Italian tongue – the first time in his career that happened.  In all his previous film and television appearances, he had been dubbed by someone else, even in his home country.

In “Don Matteo,” Hill stars as Don Matteo, an ordinary Catholic priest with an extraordinary ability to read people and solve crimes. He’s a parish priest who never met an unjustly accused person he didn’t want to help. In fact, he never met anyone marginalized he didn t want to help: the elderly, the homeless, the immigrant, the unemployed. He sees them all as he bicycles along the streets and through the countryside of his parish.

Don is a hometown boy who was baptized and ordained in Gubbio and is beloved by just about everyone in this gorgeous Italian mountain village. His easygoing manner endears him to people, making it easy for them to reveal their secrets when they get into trouble.

His friend and chess partner is policeman Marshal Cecchini (Nino Frassica), who slips him information about new cases, much to the chagrin of the police chief, who’s not at all thrilled about the collaboration. But he agrees with Don about one thing: the importance of justice being served.

Don Matteo has one more concern besides justice: to bring a word of hope to the culprit no matter what the crime. These simple tales of redemption and humanity are at times inspiring, heartwarming and funny.

DVD Set 11 includes episodes 105-116: A Touch of Rouge, Wellness Therapy, A Restless Spirit, The Secrets of Others, Francesca and the Wolf, The Carousel, I’ll Save You, A Valentine for Natalina, Close Encounters, A Stolen Dream, Natalina’s Brother, and Romantic Crisis.

DVD Set 12 Includes episodes 117-128: The Treasure of Orpheus, Beyond the Wall, Good Boys, A Test for Don Matteo, The Last Jump, The Art of Growing Up, Prime Numbers, Dear Dad, Bear Tracks, Behind Convent Walls, A Question of Honor, and Ambitious Goals.

Check out more about “Don Matteo” over at MHz Networks. It’s a really great series, kind of a throwback to some of the old goofy crime shows I remember from my younger years.

I can’t find a good clip with English subtitles (which are included in the DVDs), but here’s an episode to check out. Bonus points if you know Italian.