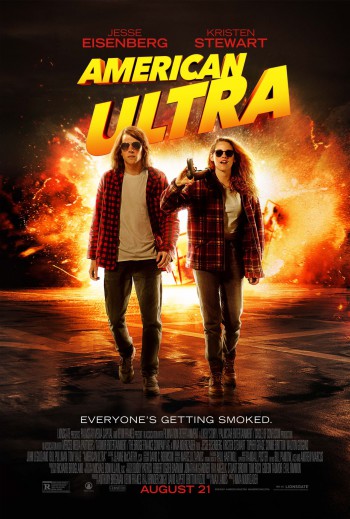 This week at the movies, Jesse Eisenberg kicks butt in “American Ultra,” Pierce Brosnan woos the ladies in “Some Kind of Beautiful,” Rupert Friend takes no prisoners in “Hitman: Agent 47” and things get scary in “Sinister 2.” And they’re all R-rated, so this week it’s all about the grownups.

Limited releases movies this week include “She’s Funny That Way,” “The Mend,” “Learning to Drive,” “Digging for Fire” and “Grandma.” Let’s take a closer look at the new movies in wide release.

This sequel to the 2012 creep-fest follows a protective mother (Shannyn Sossamon, “Wayward Pines”) and her 9-year-old twin sons (real-life twins Robert and Dartanian Sloan) as they find themselves in a rural house marked for death, the evil spirit of Bughuul continuing to spread with frightening intensity.

Run! Get out while you still can! Save yourselves! Directed by Ciaran Foy (“Citadel”), this movie also stars James Ransone, Tate Ellington and Nicholas King.

Based on the award-winning videogame franchise, “Hitman: Agent 47” centers on an elite and genetically engineered assassin (Rupert Friend), known only by the last two digits of a barcode tattooed on the back of his neck.

His latest target is a young woman on the run from powerful and clandestine forces. The mission brings startling revelations about the lethal agent and his prey, hurtling them on a collision course with their pasts. This time, his “number” may be up.

SOME KIND OF BEAUTIFUL

I’m always up for a fun romantic comedy, and this one fits the bill. Pierce Brosnan plays Richard, a successful college professor who gives up a steady stream of one-night stands and beautiful undergrads for fatherhood with the much younger Kate (Jessica Alba).

Three years later when Kate falls in love with someone else and moves out, she sends her sister, Olivia (Salma Hayek), to make sure Richard is properly caring for their son. Assuming Richard is back to his playboy lifestyle, Olivia is shocked when she starts to fall in love with him herself.

Funny, touching and romantic, be sure to check out this rom-com for grownups, directed by Tom Vaughn and co-starring Ben McKenzie, Malcolm McDowell and Marlee Matlin.

R for strong bloody violence, language throughout, drug use and some sexual content | In Theaters 8/21 | Ok for Kids 17+ | Lionsgate | Reel Preview: 4 .5 of 5 Reels | American Ultra

This fast-paced action comedy stars Jesse Eisenberg as Mike, a seemingly hapless and unmotivated stoner whose small-town life with his live-in girlfriend, Phoebe (Kristen Stewart), is suddenly turned upside down.

Unbeknownst to him, Mike is actually a highly trained, lethal sleeper agent. In the blink of an eye, as his secret past comes back to haunt him, Mike is thrust into the middle of a deadly government operation and is forced to summon his inner action-hero in order to survive.