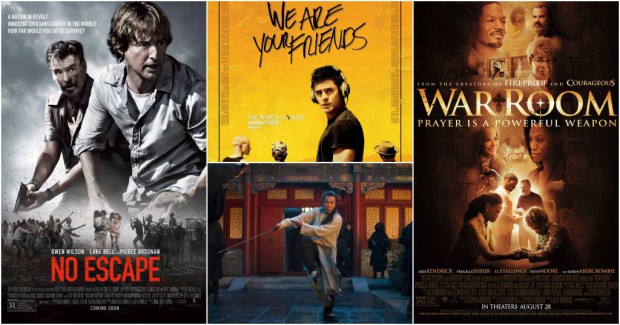 This week at the movies, Owen Wilson becomes an action hero, Zac Efron spins discs, and “Crouching Dragon” gets a sequel. Limited releases movies this week include “Queen of Earth,” “Z for Zachariah,” “Zipper” and “7 Chinese Brothers.” Let’s take a closer look at the new movies in wide release.

Woo-Ping Yuen directs this sequel to the hit 2000 film that centers on a story of lost love, a legendary sword, and one last opportunity at redemption.

Owen Wilson as an action hero? Ok, I’m cool with that. If he wasn’t so convincing in this movie, it might seem like a parody. But he is, so it doesn’t.

In this intense thriller, Wilson plays an American businessman who’s recently moved to Southeast Asia with his wife (Lake Bell) and kids. When they suddenly find themselves in the middle of a violent political uprising, they must frantically look for a safe escape as rebels mercilessly attack the city.

Directed by John Erick Dowdle and written together with his brother Drew, this movie also stars Pierce Brosnan.

WE ARE YOUR FRIENDS

Set in the world of electronic music and Hollywood nightlife, this movie follows an aspiring 23-year-old DJ named Cole (Zac Efron) who spends his days scheming with his childhood friends and his nights working on the one track that will set the world on fire.

But everything changes when he meets a charismatic but damaged older DJ named James (Wes Bentley), who takes him under his wing. Things get complicated when Cole starts falling for James’ much younger girlfriend, Sophie (Emily Ratajkowski).

With Cole’s forbidden relationship intensifying and his friendships unraveling, he must choose between love, loyalty, and the future for which he is destined.

This faith-based movie from the creators of “Fireproof” and “Courageous” explores the transformational role that prayer plays in the lives of the Jordan family. Tony and Elizabeth Jordan are a middle-class couple who seemingly have it all – great jobs, a beautiful daughter, their dream home. But appearances can be deceiving.

In reality, the Jordan’s marriage has become a war zone and their daughter is collateral damage. With the help of Miss Clara, an older, wiser woman, Elizabeth discovers she can start fighting for her family instead of against them. Directed by Alex Kendrick, this movie stars Kendrick, Priscilla Shirer, T.C. Stallings and Karen Abercrombie.