“After Words” could easily be a commercial for Costa Rica. Marcia Gay Harden plays a stereotypical librarian who pays no attention to her appearance and lives a quiet life immersed in books but not participating in her actual life. She’s even stereotypically named Jane. If you can get past the cliches, the movie is actually touching and enjoyable, when Jane takes herself to Costa Rica and meets a younger man named Juan. 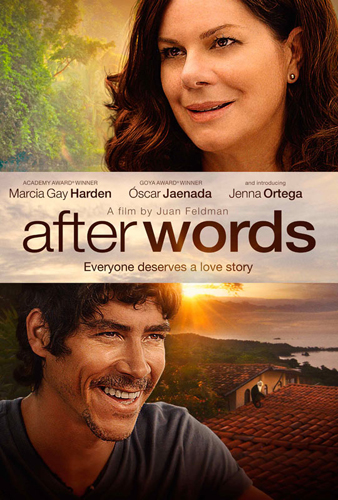 The movie is watchable primarily because of the performances of the film’s two stars, Harden and Oscar Jaenada, who plays Juan, a tour guide who is trying his best to make enough money to send his daughter to an expensive American school. In order to pay the tuition, he has resorted to prostitution but sees an opportunity to make money more respectably when Jane shows up in need of a guide.

What Juan doesn’t know is that Jane has just lost her job at the library because she is no longer needed in the age of digitalization. As an aging woman, she feels she has nothing to live for, so her trip to Costa Rica is a last hurrah – in a very real sense. Her plan is to commit suicide while there.

Juan is desperate for the client and is nothing if not persuasive, so he puts a damper on Jane’s plans by convincing her to continue her tours day after day. What follows is a complete transformation of this woman’s life.

All of the other characters in the movie are peripheral. It’s really all about Jane and Juan, and again, it’s the actors and the direction by Juan Feldman that transcend the script. Of course, Costa Rica is a beautiful backdrop that serves as its own character in the movie in many ways.

“After Words” is being released by Level 33 on Fri., Aug. 21, 2015 at the Anthology Film Archives in New York City and in Los Angeles at the Laemmle Royal with openings in multiple theaters across North America.