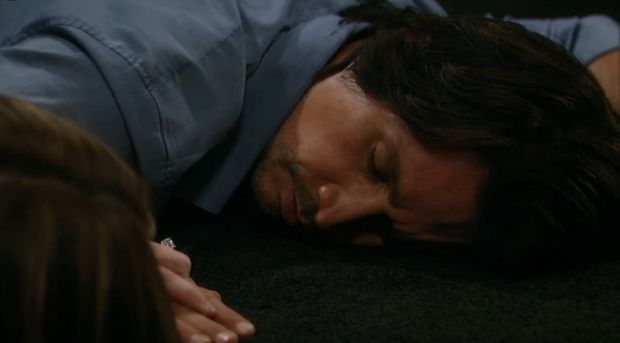 (Note from Jane: Apologies for not getting this out over the weekend – a tornado ripped through Traverse City and knocked the power out. In fact, I’m working at the library using their wifi as I write this. Our little log home is still standing, though one window has a big hole in it, thanks to massive amounts of golf ball-sized hail. Also, we had to chainsaw our way out of the driveway. Super fun.)

Let’s start with Luke’s final day. It was really sort of anticlimactic. It was nice to see him with Sonny, but the dude was going to leave without saying goodbye to Lulu? And what was in the note he left for Laura? I was disappointed by this day, GH.  Not exactly a send-off to remember.

Kiki, on the other hand, left town and told everyone she was GOING AWAY (just for a weekend) and practically took out a billboard advertising it. Morgan and Ava/Denise then could not help themselves and fell into bed again. Honestly, Morgan, how can you not know who this woman is? Franco figured out they were doing it and told Silas, who blew a cork at them for doing that to Kiki. This, apparently ,was the final straw for Silas, who vowed to reveal Denise is Ava and that he kidnapped Avery (not Nina) to cure Ava’s cancer. Sadly, Silas isn’t going to have a chance to ease his conscience since he’s been stabbed in the back and presumably dead.

As always, we have several suspects. Morgan was determined to stop Silas from telling Kiki. Ava was afraid she would end up in jail for killing Connie if her identity was revealed. And Nina, who had checked herself into Shadybrook after Ric convinced her SHE kidnapped Avery, found out Silas really kidnapped the baby and wanted revenge. We ended Friday with Nina holding the murder weapon. However, Ava and Morgan both required stiff drinks after some stressful event. My money is on Ava for this one. I think Nina pulled the knife out but didn’t stab him. So this will be our next Big Mystery, I guess: Who killed Silas?

The other big secret in town is now not really a secret since half the people on the show know about it. Laura was the latest to learn Jake is Jason, and reamed Liz out about it until she found out Nicolas may have had Hayden shot to keep the secret. We’ll find out if she will keep quiet – I am sure she will since no one seems able to tell this secret. Pretty soon, every single person on the show except Jason is going to know.  However, Hayden is now awake. Jake’s got an itch to find out who he is. Maybe this will all finally come out once and for all? Please, GH?

In other news, Valerie and Dillon have agreed to date each other to try to convince people they aren’t interested in Dante and Lulu. I really like this Dillon, and I kind of am hoping he does end up with Lulu. Nathan now knows Dante and Valerie slept together, and I have no doubt Maxie will get him to tell her that piece of info. She will then blab to Lulu, and the jig will be up.

I enjoyed the scene where Maxie and Madeline (the woman who raised Nathan) were left together to trade barbs. Maxie came out on top, of course. Kudos, girlfriend.

Nina has realized she loves Franco, and they had a moment when he found her at Shadybrook. Denise/Ava convinced her to go back to him, which was a really weird twist. They are cute and fun together, so I hope it works out, but not if Nina’s going to be in jail for Silas’s murder.

Nathan is suspicious of Ric and thinks he is setting Nina up. Between Nathan and Franco, hopefully she will pull herself together. How did she manage to just blow out of Shadybrook after signing commitment papers, GH? And speaking of Franco, I’m thinking he managed to liberate the evidence against Ava from Scotty Baldwin’s desk. It would be ironic if she killed Silas to keep him quiet, yet the evidence against her had disappeared and so did her motive.

Carly and Laura had some interesting moments together when Carly questioned Lucky leaving town so soon after little Jake was returned. There were some claws out there, but in a restrained way. Laura is certainly not one to keep her mouth shut when confronted.

Not much else happened this week, other than Michael threatening to get ELQ back from Nicolas (yawn). It’s odd that now that Michael is not the CEO, he doesn’t tuck his shirt in.

Sam made noise about wanting Danny and little Jake to get to know each other. Liz is hesitating for some reason. I don’t know what she thinks will happen. Jason will see them together and remember who he is? They will bump their Wonder Twin rings together and become Jason? And why doesn’t Liz just say that she has not explained to Jake that Jason is his bio dad and doesn’t want to confuse him? That seems like an easy excuse to me. Will Liz’s other two children be allowed downstairs again before they are 20?

Wardrobe Pick of the Week: It was slim pickings this week, but the best thing I saw was Ava/Denise’s blue and white wrap dress. In contrast, the worst thing was that awful blue/green wrap dress Laura had on. It just did not fit her. I must ask again: doesn’t Sam own anything other than tank tops? She can’t afford sleeves since she has no PI cases?

So, I’m feeling a little fatigued after Luke’s departure and not so excited about the current happenings, GH. I’m waiting for things to pick up a little bit. Let’s get into Brad’s pre-existing marriage and play around in that for a while maybe. And when is Valerie going to announce she is pregnant? Because I can just feel that coming. I’ve heard Kristina Corinthos is coming back, so that at least will be something new.

Thoughts on this week’s GH happenings? Sound off in the comments below.