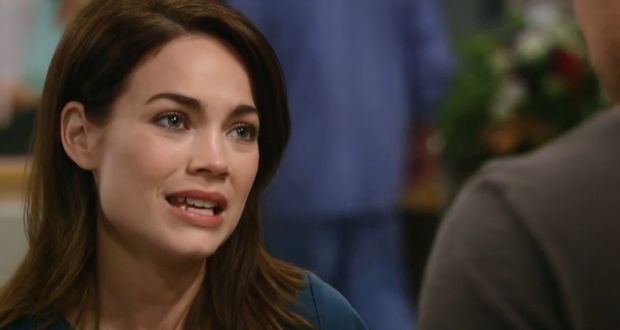 The Silas murder drama continues. Ava is being haunted by Silas but he never says she killed him, so I just don’t think she did it. We have no new leads on who it could be. Drop some breadcrumbs on this one, GH, please.

Ava and Nina and Franco are locked in a ceasefire since Ava has a photo of Nina at the crime scene and Franco knows who Ava is. Kiki is still hysterical (so what else is new?). I do feel bad for Kiki, who thinks she has lost both parents and has a cheating creep of a boyfriend. I don’t know where the whole murder mystery is going, but I hope it moves along.

I loved that Scotty quit as DA to represent Franco, who is in custody for Franco’s murder (I’ve always loved Scotty, who somehow loves too hard and fierce for his own good). What I’d like to know is why Franco doesn’t trust him enough to tell him everything, whereas he trusts Liesl. Ric has taken over as DA and is out to get Franco.

Dillon is apparently not only a screenwriter, but a director, too. His daddy has given him cash to finance the movie he plans to film on the Haunted Star. This is an excellent opportunity for Dillon and Lulu to become closer. And a fun way to hopefully show us parts of the Haunted Star we don’t see often (and thanks, GH, for having Lulu mention the fact that Helena cursed the ship once – I love it when old history works its way into a story).

I think Dillon and Lulu are adorable as a couple. Dillon is just so earnest all the time, compared with Dante, who honestly seems pretty crabby most of the time. But Lulu and Dante are back in the saddle again and now talking about that frozen embryo they have. It’s definitely time for someone to get pregnant on this show.  It was super awkward when Lulu overshared with Dillon about her and Dante having sex again. TMI, Lulu. I would like to know why Dante and Lulu’s apartment has those giant fans in the wall. Doesn’t it get cold in there in the winter? And shouldn’t they move someplace where Rocco can have his own room instead of a crib next to the bed?

Olivia’s back in town, but we’ll have to wait til next week to find out why. Where’s the little nameless Jerome baby? And will Ned come back, too? Because I totally love Ned. 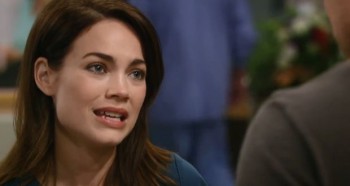 Jake and Elizabeth are officially engaged. I felt so happy for Elizabeth finally getting what she has wanted for so long, however it totally is going to blow up in her face eventually. Hayden is out of the hospital and coma-free yet has no memory (or so she says). She has moved in with Nikolas and is starting to remember (or pretend to remember) some bits and pieces. I’m sure Nikolas will be all over her to keep the truth about Jason under wraps. Nikolas as a bad guy is so weird, but he’s definitely making it work.

Valerie has packed up and moved out of Chez Cassadine because Hayden has moved in. Can’t she afford her own place now? I don’t like Valerie, GH. Maxie doesn’t either, and she thought it was a bit odd that Valerie reacted so strongly when Dante showed up in a bloody shirt (he couldn’t change? Isn’t it considered unsafe to walk around with someone else’s blood all over you?). Maxie is going to be soooo mad at Nathan when she finds out he knew Valerie and Dante slept together and didn’t tell her. She could totally dump him over that, I think.

Carly is hot and heavy into wedding planning. She and Sonny are getting married at his house. Is she moving in then? There’s been way too much talk about a fresh beginning and a new start. Surely that wedding will turn into a mob war. Speaking of which, we still don’t know if Julian really is after Sonny’s shipments. Yawn.

Jordan stomped into Sonny’s place and demanded that her adult son TJ come home with her. Sorry Mama Jordan, not a chance. I loved Carly trying to throw down with her about being a bad mother. Sonny handed Jordan evidence about the recent mob violence, which points to Julian. Julian denies it all, of course. Yawn.

Little Jake and Danny got a chance to bond as brothers while Sam hovered over them, barely able to contain herself. It was cute to see them together. Poor little Jake announced that his one daddy is gone and his other daddy is dead. Yeah, that’s life on a soap, kid. Sorry.

There’s an interesting little thing going on with Rosalie. First she asks Lucas to help her with the hospital paperwork (she’s an executive assistant, yet she can’t fill out a form?) and hits on him. He turns her down, of course. Then Brad corners Lucas and is about to tell him all about his marriage when Rosalie appears and – gasp- she is the one he is married to. I can’t wait to hear this explanation. This must also be Rosalie’s deep dark secret that Nikolas knows. I have no idea what to expect from this one, GH, so it should be good.

Fashion pick of the week: It was slim pickings so I am going with Maxie’s pink nightgown or cami top with the black bows. Super cute. Fashion horror of the week was Ava’s white mummy bandage shirt. She was all set for Halloween with that rag.

So what will next week bring us, GH? I’m excited about Sonny and Carly’s wedding and hope it doesn’t go badly. Maybe Lucas and Brad will hash things out and figure out a way to get Brad a divorce from Rosalie. And I’ll be watching as the sexual tension builds between Lulu and Dillon!