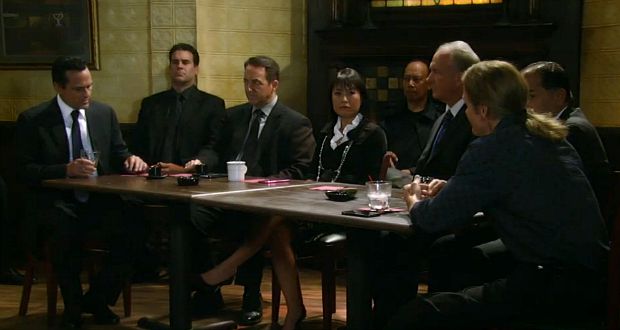 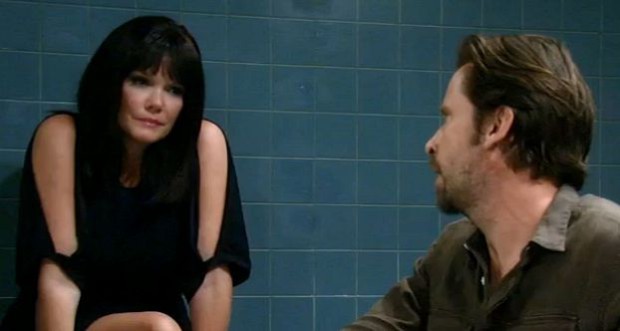 So Silas is dead and Franco’s in custody since he was caught with the knife. Ava and Morgan are both possible suspects. Franco probably didn’t do it. Nina probably didn’t do it. I have to say I am looking at Kiki a little funny, though. You’re at a weekend away and your dad leaves you a message that he needs to talk to you so you come all the way home? And she was a little bit too hysterical over this whole thing.  Knowing you, GH, the murderer will probably turn out to be someone we haven’t been given a clue about, so all of this will be for naught.

I love how Franco called Olbrecht to come help him. I still don’t know why that woman will do anything for him. She told Nathan to hear Franco out about who might have done it. Before Nathan has a chance, though, Ava tells Franco if he tells on her she will tell on Nina, since it seems she saw her at the murder site (which supports my theory that Ava didn’t actually do it).

Nina snuck back into Shadybrook for an alibi after pulling the knife out of Silas. Not too hard to manage that since Heather was blowing in and out of that place on a daily basis and no one noticed. Is Nina going to freak out and try to turn herself in to save Franco?

Sonny and Carly are afraid Morgan killed Ava since Morgan told Sonny that Silas knew about his affair with Denise. I loved Carly’s list of all the things Morgan has done wrong recently.

Hayden is awake from her coma and insisting all she remembers is being Jake’s wife. Has Nikolas already paid her off to keep her mouth shut? Sam is not having any of it and is determined to get the truth out of her. Nikolas asked Elizabeth point blank if she wanted him to kill Hayden, and she said no. Our week ended with Nikolas going to see Hayden. Is he going to kill her or are they already in cahoots and he’s paying her to be quiet?

Liz is still tying herself in knots over the whole Jake thing, hoping it doesn’t come out. The secret has driven Laura out of town (conveniently, since she came back just for Luke’s goodbye). Honestly, can we just DO this thing and move on?

Sonny met with the Five Families to find out who is hijacking his shipments. I’m not sure what the point of that meeting was, other than to show us how diverse the families now are – they have a woman! They have an Asian! I couldn’t stop giggling since the Russian Sonny killed was a dead ringer for Carson Kressley, and I kept waiting for him to tell Sonny he needed to zhuzz his sleeves.

Since when do mobsters use a formal mediator to work out their problems? And what did this meeting accomplish? We still don’t really know who did it, just that it was someone previously associated with the Jeromes. And how is it the other families have funky cool names for their organizations but Sonny doesn’t?

Lulu and Dante ended up on a weird double date with Dillon and Valerie. Dillon clearly is in love with Lulu again. Maybe if he wore something other than a hoodie, he might have a better chance.  I’m just waiting for all of that to implode.

Sam admitted to Patrick that she was keeping her investigation of Nikolas from him since she doesn’t trust Elizabeth. Patrick was a bit miffed, so maybe they will break up soon (fingers crossed – I’m not a fan).

I don’t have much to choose from for my wardrobe pick of the week so I’m going with Elizabeth’s floral top. Better than Carly’s pink sweater which was on the edge of being ugly.

So what’s around the next turn, GH? Will Jake ever find out who he is? Will Sonny start a war with the Jeromes yet again? Will Brad ever explain his marital status to Lucas? Will we ever see Felix’s new boyfriend? So many questions, no clear answers.