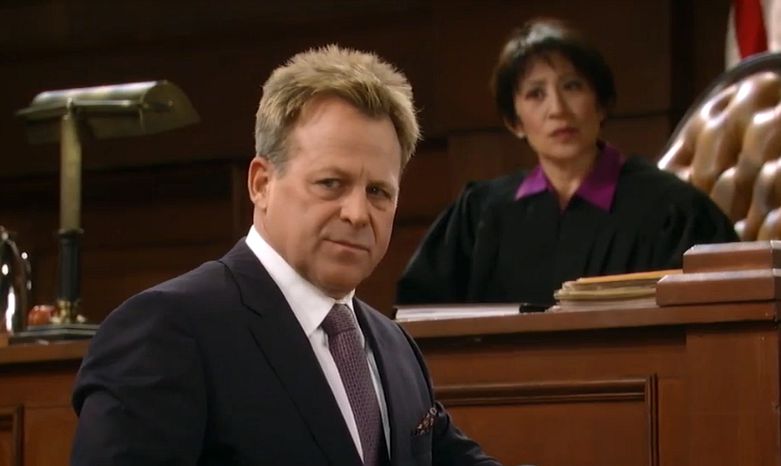 Thanks to Scotty Baldwin, the cat is at last out of the bag that Denise is Ava. I don’t know if he really has a DNA test or if he’s just bluffing, but thank goodness this charade can finally end. He spilled the beans at Franco’s murder trial (which happened so fast after the murder it gave new meaning to the term “speedy trial”).

My guess is Scotty figured this out somehow and is bluffing. Ava had already told Julian the truth, so the truth was slowly oozing out anyhow. Just in the nick of time, too, since I am about DONE with her accent, GH.

Franco didn’t kill Silas but is afraid Ava will use her photo of Nina with the murder weapon if he exposes her as faking the whole Denise thing. The poor guy is sweating bullets as Scotty makes his revelation.

So who actually killed Silas then? I had written Morgan off as a suspect, but Carly and Sonny are now worried he might be bipolar, citing all of the wacky things he has done lately. That might make sense if he wasn’t a soap character, since just about any of them could be bipolar at times. It sounds like the train is rolling towards Morgan, though. Sonny and Carly will do whatever they can to protect him, I’m sure.

Speaking of Sonny and Carly, they’ve set a wedding date for September 2. Joss won’t be there since she in Australia with Jax – probably a bummer since it’s winter there and there’s no corn growing. Michael says he’s not coming, but Sabrina is urging him to rethink it. She’s blaming Sonny killing AJ on bipolar, as well. Heck, if I knew that was a catch-all excuse, I would’ve gotten diagnosed years ago.

Carly is weirdly cozy with Madeline, discussing their mentally ill children. Madeline tried to get Nina to sign over her fortune to her and Ric, but Nina was lucid enough to say no, but not lucid enough to not tell everything to her catatonic best friend in the wheelchair. GH, I’m really hoping you give that poor woman at least one line before Nina checks out of Shadybrook! Nina did tell Nathan that Silas kidnapped Avery, but wouldn’t say why or who actually killed Silas.

If Carly and Madeline make weird bedfellows, so do Maxie and Valerie, who bonded over Carly’s jewelry, as they dug through it to find a piece to go with her wedding gown. They’ve decided to be pals now since they both knew the words to the Countess Luann’s song (“Money Can’t Buy You Class”). 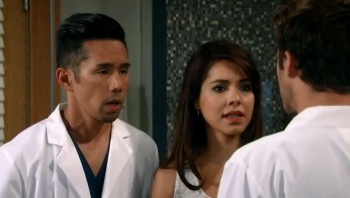 The other mystery that was solved this week is Brad and Rosalie’s marriage. They got married to satisfy Brad’s parents, who kept pushing him to marry, but they’ve stayed married so they don’t have to testify against each other for an unknown crime. Lucas is down with all of this, prepared to help them clear their names somehow. It might be hard to do, Lucas, if they can’t even tell you what they did. It was interesting to see another side to Rosalie’s personality – she really lit up in her interactions with Brad. Maybe something interesting will develop in this storyline.

Nothing is happening with the reveal of who Jake really is – just lots of people talking about it. Hayden is living with Nik and her memory is slowing coming back. Maybe she’ll finally remember – most likely just in time for Liz and Jake’s wedding.

Julian still sort of denies being back in the mob, but only Alexis believes him. Olivia is hoping he’s not back in since she really wants to tell him Leonardo (their son) is still alive so she can come back to Port Charles. Now that Ric is acting DA, Sonny seems to be without a lawyer. I’ll start the chant here: BRING BACK DIANE!

TJ wants to live at Sonny’s permanently so he can have sandwiches made for him by Graciella and frolic in swimwear with Molly. Molly, whom Alexis was all over about getting into a good college, is going to PCU along with TJ, but will be living in the dorm. Did these two ever consummate their relationship or do we still have to go through that awkwardness at some point?

This week felt kind of slow to me – I could have skipped two or three days in the middle and not missed much. I miss the days where you had to watch every day or you would miss something important. Are you going to pick up the pace a bit, GH, now that we’re almost at the bottom of Silas’s murder? What will happen to screw up Sonny and Carly’s wedding (because I just have a feeling that they are WAY too happy about it and thus it will blow up)?

My fashion pick of the week is Sabrina’s yellow, white, and blue dress. I’m also going to call out a weird random moment of the week– Jordan threatened to put Julian in a cell with Max Giambetti, who was also in custody. WHY is Max in custody? For what? When did this happen? Huh?

I’ll be tuning in next week, GH, to see if you move this murder trial along a bit and get us to a resolution. Don’t let me down!