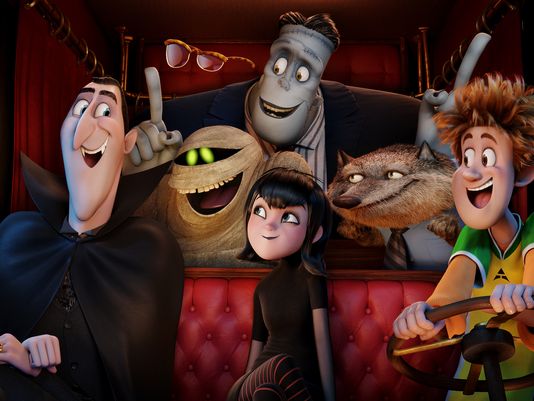 New movies this month include the inspirational “90 Minutes in Heaven,” a thrilling trip to “Everest,” new installments of the “Hotel Transylvania” and “Maze Runner” franchises and lots more. Here’s a sneak peek at what’s new in theaters and on DVD and Blu-ray this month. Note that release dates are subject to change.

Based on the incredible true story and New York Times bestseller, this movie follows the life of Don Piper (Hayden Christensen), who died Jan. 18, 1989 when a semi-tractor truck crushed his car. Declared dead by the first rescue workers to arrive on the scene, Don’s body lay under a tarp for the next 90 minutes. His soul, meanwhile, was experiencing love and joy like he’d never known before – in Heaven.

When a pastor’s prayer helps bring Don back to life, he becomes a living miracle, but also experiences pain and emotional turmoil. With the support and prayers of his beloved Eva (Kate Bosworth), their three kids and friends near and far, Don clings to his faith in God and fights to regain a semblance of his previous life.

Inspired by the incredible events surrounding a treacherous attempt to reach the summit of the world’s highest mountain, “Everest” documents the journey of two different expeditions challenged beyond their limits by one of the fiercest snowstorms in history.

This sequel to the 2014 hit movie follows Thomas (Dylan O’Brien) and his fellow Gladers as they face their greatest challenge yet: searching for clues about the mysterious and powerful organization known as WCKD. Their journey takes them to the Scorch, a desolate landscape filled with unimaginable obstacles.

Teaming up with resistance fighters, the Gladers take on WCKD’s vastly superior forces and uncover its shocking plans for them all. Directed by Wes Ball (who also helmed the first movie), this movie is based on the book by James Dashner and also stars Patricia Clarkson, Giancarlo Esposito, Will Poulter, Kaya Scodelario and Aidan Gillen.

In this cute comedy from director Nancy Meyers – a favorite of mine who also helmed “It’s Complicated” and “Something’s Gotta Give” – Robert De Niro plays Ben Whittaker, a 70-year-old widower who’s discovered that retirement isn’t all it’s cracked up to be.

Seizing an opportunity to get back in the game, he becomes a senior intern at an online fashion site, founded and run by Jules Ostin (Anne Hathaway). This movie also stars Anders Holm, Rene Russo, Nat Wolff and Linda Lavin.

The Drac pack is back for an all-new monster comedy adventure! Everything is changing at Hotel Transylvania. Dracula’s rigid monster-only hotel policy has finally relaxed, opening its doors to human guests.

But behind closed coffins, Drac is worried that his adorable half-human, half-vampire grandson, Dennis, isn’t showing signs of being a vampire. So while Mavis is busy visiting her human in-laws with Johnny – and in for a major cultural shock of her own – “Vampa” Drac enlists his friends Frank, Murray, Wayne and Griffin to put Dennis through a “monster-in-training” boot camp. But little do they know that Drac’s grumpy and old-school dad is about to pay a visit to the hotel.

Twelve people have walked on the moon, but only one man has ever walked the immense void between the World Trade Center towers. Guided by his real-life mentor, Papa Rudy (Ben Kingsley), and aided by an unlikely band of international recruits, Philippe Petit (Joseph Gordon-Levitt) and his crew overcome long odds, betrayals, dissension and countless close calls to conceive and execute their mad plan.

This wonderful collection of spooky tales and silly stories, faithfully adapted from classic books, is the perfect way to get kids reading. The set includes: Where the Wild Things Are, Creepy Carrots, Dinosaur Bones, The Day of the Dead, Dem Bones, The Little Old Lady Who Was Not Afraid of Anything, Teeny-Tiny and the Witch-Woman, A Very Brave Witch, Space Case, Diary of a Spider, Los Gatos Black on Halloween, By the Light of the Halloween Moon, A Dark, Dark Tale, What’s Under My Bed, Strega Nona, The Three Robbers, Fletcher and the Falling Leaves, The Trip, Georgie, and The Wizard.

ALPHA & OMEGA: THE LEGEND OF THE SAW TOOTH CAVE

The Alphas and Omegas share a thrilling adventure filled with suspense, humor and heartwarming moments after Runt – Kate and Humphrey’s Omega wolf cub – sneaks off to explore the haunted Saw Tooth Cave.

When Runt finds a wolf who’s been driven from her pack for being different, he musters all his courage to help her – and learns the joys of lending a paw to a friend in need. A great way to chat with kids about accepting and embracing each others’ differences.

Scooby-Doo and the gang keep rolling along year after year – thank goodness! This 2-movie set includes “Goblin King,” in which our heroes board the Grim Reaper Railroad bound for the fantastic world of Halloween Land to retrieve the powerful Goblin Scepter from the Goblin King before the villainous Krudsky can.

Along the way, the Mystery Inc. crew encounters the Headless Horseman, the helpful Jack O’Lantern and a frisky broomstick that takes them on the ride of their afterlife. In”Abracadabra-Doo,” a secluded school for magicians faces danger from a fantastical flying creature outside and sinister forces inside. Can Scooby-Doo, Shaggy, Daphne, Fred and Velma learn enough tricks of the trade to uncover the secrets that will save the school? We all know the answer, but it’s a hauntingly fun ride getting there.

This 8-DVD set includes all 38 episodes of season two of the popular “Yu-Gi-Oh! 5DS” series. With the defeat of Director Goodwin and the Dark Signers, New Domino City s barriers have been torn down.

City and Satellite are now one – united in the hope of building a brighter tomorrow. Yet in this time of renaissance and rebuilding, a new enemy emerges, and Yusei and his friends must rev it up in order to save the world — one duel at a time.

Sportsmanship is put to the ultimate test in Equestria, as your favorite Ponies – Twilight Sparkle, Applejack, Pinkie Pie, Rarity, Rainbow Dash and Fluttershy – prepare for the Games Ponies Play! Included are six awesome adventures that will teach kids all about overcoming the challenges of competition through the magic of friendship.

Will Spike be able to build up the courage to light the ceremonial Equestria Games torch? Who’s the best athlete in Equestria? And will it matter, when true friendship is on the line? Another great installment of the MLP franchise.