The fascinating documentary, “Listen to Me Marlon,” is an amalgamation of private audiotapes recorded by Brando himself, along with never before seen home movies and photos, archival interviews, and clips from his films. It’s a well-rounded portrait, in which Brando psychoanalyzes his own shortcomings, talks about his childhood, and discusses his feelings about his films, acting, and fame.

Who was Marlon Brando? A very complex person, endlessly curious, brilliant, difficult, introspective, an abused and unwanted child, a human rights activist, a nature lover, and even “shy and sensitive,” as he says he felt when he first arrived in New York. By his own assessment, acting is the only thing he was good at and the first thing he was ever told he could do well.

When Brando moved to New York and began to study acting, he became not just a protege of teacher Stella Adler, but a part of her family. She took him in when he felt emotionally lost.

He was lost because his relationship with his parents was difficult and damaging. His mother was an artistic soul, and he says he got “a sense of the absurd” from her. He loved her dearly, but she was “the town drunk.” His father was also an alcoholic who emerged from his own painful childhood as a violent man. He abused his wife and son. Because of that, Brando says in the documentary that he hated Stanley Kowalski, his most famous character from “A Streetcar Named Desire.” He couldn’t identify with the character, even as his fans identified him with Stanley.

Footage of some of Brando’s early interviews is included. One of the most interesting is one that he shared with his father. In a recording afterward, Brando said that the two men put on a hypocritical show of loving son and doting father – emotions that neither actually felt toward the other. The animosity between the two of them is evident in the footage, however, especially on Brando’s face.

Some of the other interviews are fun to watch, though, because Brando unabashedly flirted with female interviewers on camera. It made me wish I had been his contemporary! 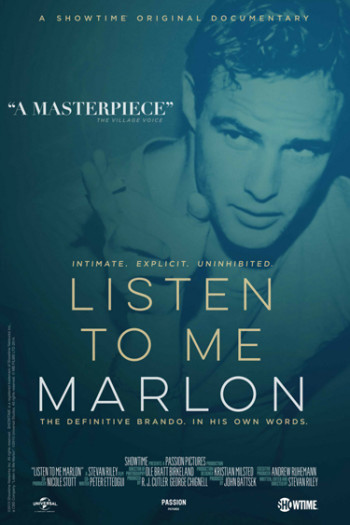 Brando’s recordings about his films and the directors he disliked (Coppola, Bertolucci, ahem) will be of special interest to film buffs. He wasn’t sure he could do “The Godfather” role properly, and neither was the studio. He had to do a screen test to get the part. We also learn his feelings about “Last Tango in Paris” and “Apocalypse Now.”

The film, “Mutiny on the Bounty” was an opportunity for Brando to finally go to Tahiti, after having already fallen in love with the place through books. Of Tahitians, he said they had “unmanaged faces” with “no manicured expressions.” In them, he found people who treated him like an ordinary human being. Their souls could not be bought, he said, and they didn’t know or care that he was a movie star. They did not yet have “the white man’s nightmare” – i.e., “the want of things.” Even though “Mutiny” gave him Tahiti, Brando said it was his worst experience on a movie.

As most people know, the actor’s personal life was largely a shambles. He says in the film that if you’ve never known love, you don’t know what it looks like, so you look for it in the most unlikely places. This was one of the reasons, apparently, for his infidelity during his marriages.

Home movies are also included of his daughter, Cheyenne, as a child – a daughter who committed suicide at the age of 25. We also see the familiar footage of his son, Christian’s trial after the shooting of Cheyenne’s boyfriend.

In the film, we see a rather bizarre digitalized 3D rendering of Brando’s head that he had done in the 1980’s, and we hear some of his homemade self-hypnosis tapes. In fact, the documentary’s title comes from one of those tapes in which he asks one part of himself to listen to the wiser part of himself.

This film by British filmmaker Stevan Riley was made with the consent of the Brando estate. It provides intimate access to the inner thoughts of someone who was intelligent enough to see how his inner demons had hurt himself and others. But, like most of us mortals, he was largely helpless to heal himself.

What I’ve disclosed here is a mere fraction of what you’ll learn about Brando in “Listen to Me Marlon.” Anyone interested in the great actor’s legacy, in acting as a craft, or in human psychology will enjoy this compelling documentary. It opens in New York on July 29, 2015 and in Los Angeles on July 31. A national rollout will follow.