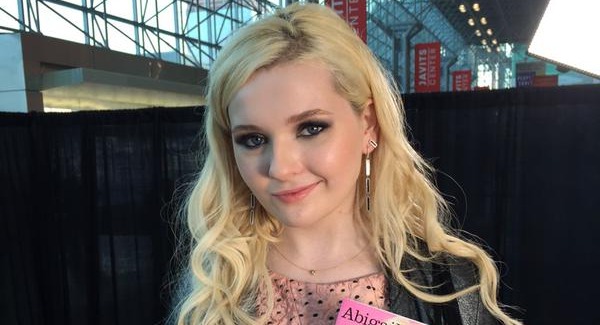 Abigail Breslin stopped by BookCon (@TheBookCon on Twitter) at the Javits Center Saturday evening to discuss her memoir, “This May Sound Crazy,” with YouTube personality Grace Helbig in a roomful of enthusiastic teenage girls. The Harper Collins book is available October 6, 2015, and you can pre-order it here.

The 19-year-old actress’ most recent role was as Arnold Schwarzenegger’s zombie daughter in “Maggie.” Her breakout role was in the 2006 indie hit “Little Miss Sunshine,” where she played dour tween Olive who yearns to compete in a pageant. The part earned her an Oscar nomination for best supporting actress, and she has been busy since.

Breslin also writes and sings songs; her debut album, “The World Now,” comes out June 15. Fans got a taste of her musical talent with the YouTube version of her single, “You Suck,” about a sticky breakup with a former boyfriend in which she tells him she hopes his hair “falls out.” Check out the video.

Breslin, whose Twitter handle is @yoabbaabba, is active on social media and her website http://mixtapesandwintercoats.tumblr.com, a collection of her musings on love, life and loss, which is the inspiration for her book. The adoring teenage crowd Saturday had many questions for the actress, who dispensed advice like a mini-Dear Abby.

As an example, on her website Sunday, a fan asked: “If you could trade places with anyone in the world, living or dead, who would it be and why?”

“I would totally trade places with Molly Ringwald in the 80’s,” Breslin wrote. “Just being a part of the whole John Hughes era is a huge dream of mine.”

At the Q&A, in her satin pink dress with black polka dots, topped by a funky black leather jacket, she looked like she just stepped out of the Brat Pack decade.

Asked at the Q&A what quality she most looked for in a best friend, Breslin replied, “I think it’s really important to have an honest friend who will tell you when you’re being really stupid.” When she was tempted to call a new guy, her friend would save her from stupid actions by saying, “’You should not call him!’ And then she’ll take my phone and toss it across the room.”

She added, “I think somebody’s who’s like your opposite in some ways is really good, because they can calm you down.”

Does she have advice for other teenagers who want to write memoirs?

“I wrote this book in the most unorthodox way,” Breslin noted. “I posted it on my IPhone.” She doesn’t recommend that, but her advice is to “make sure you’re writing about something you really like talking about and that you feel really passionate about, because there are times when I thought something would be a good idea but I wasn’t feeling it and then you just end up frying out your brain.”

She suggested that it’s “better to just cut things, and put things aside, and I thought, ‘Do you truly want to talk about this?’ You’re always going to get better material that way.” She added, “Write from an authentic place.”

Asked if there would be a sequel to the memoir, Breslin said her next effort might be fiction. “That would be really cool. I feel like I’ve said pretty much everything that I could possibly say in this book, though.”

On a more serious note, someone asked Breslin’s advice for young women on how to love themselves more, especially on days when they feel self critical.

“I mean, I think it’s actually something we all go through,” Breslin said. “We all have our days when we’re like – just the other day, I literally said … my face and my make up, I just want to rip off my face and restart from birth.”

The actress noted on those days it’s important for women to go easy on themselves. “I think the more you tear yourself apart, the more you give off a vibe of feeling bad, and then it’s not good.” On those days, she said, “You should do something that is not about your looks.”

“We put so much pressure on girls to look a certain way,” Breslin noted. “When I go to movie premieres, people are not talking about, ‘she did this movie and she’s really good or I think she’s horrible.’ It’s only about, ‘the shoes don’t go with the dress,’ and I think that’s really bad. They don’t usually say that about guys, so I think that it’s important to do things on those days that aren’t about how you look.”

The actress laughed, “When I feel bad about myself and I have a zit that I’m harvesting, I write something or write a new song or work on a chapter or do something that I can feel proud of, that has nothing to do with how I look.”

That’s great advice, Helbig told her, although Breslin demurred, laughing, “That was really long-winded.” Then Breslin told fans to follow her on social media, and especially to look for her posts on her cat Gizmo.