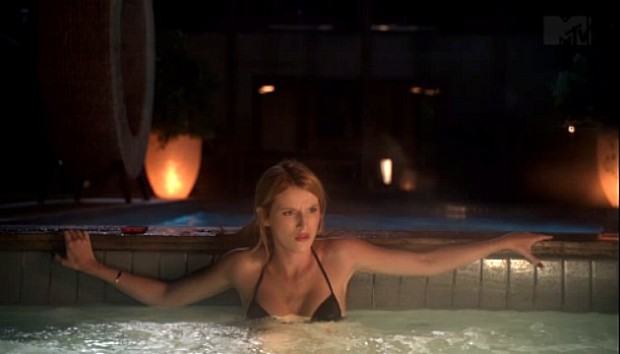 I’ll just come right out and say it — I’ve never seen any of the “Scream” movies. But if the trailer for the new show from MTV and Dimension TV is any indication, it looks pretty scary. With, of course, the requisite number of good-looking youngsters and scantily-clad females for an MTV show! It premieres June 30 at 10 p.m. ET/PT on MTV.

Based on the hit horror movie franchise, MTV’s “Scream” – the TV show – follows what happens when Nina, a gorgeous entitled teen at Lakewood High School, is murdered in an apparent crime of passion, it exposes the inner workings of the town’s complex social hierarchy.

After Audrey, a young artistic loner, is “outed” via cyberbullying, she has to find a way to hold her head up high with the help of Noah, her nerdy, hyper-intelligent best friend, and a renewed relationship with Emma, her former “bestie” from elementary school.

Meanwhile, Emma’s mom, Maggie – who’s also conveniently the town’s medical examiner – works with the sheriff, Clark, to solve the murder and determine if it’s connected to a crime spree from the town’s dark past — a murder spree committed by a previous generation’s “bullying victim” Brandon James.

Fan of the “Scream” movies? Will you watch the TV show? Scream it out in the comments below!