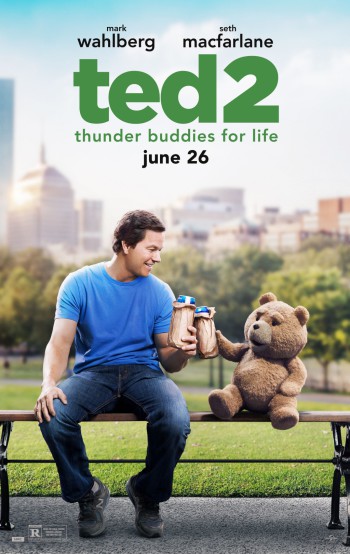 SYNOPSIS: This sequel to 2012’s “Ted” finds newlywed couple Ted and Tami-Lynn wanting to have a baby. But there’s just one glitch. In order to qualify to be a parent, Ted will have to prove he’s a person in a court of law.

REVIEW: The symbolism of seeing “Ted 2” on the same day the Supreme Court legalized same-sex marriage across the nation is not lost on me. While the country celebrated, that bear known as “Ted” was working through his own equality issues.

“Ted 2” picks up after the events of 2012’s “Ted,” with Ted (voiced by Seth MacFarlane) marrying the love of his life, Tami-Lynn (Jessica Barth). But the honeymoon doesn’t last long, and soon Ted and Tami-Lynn are arguing and throwing things at each other like a scene out of an Elia Kazan movie. So they do what any good dysfunctional couple does — decide to have a baby in the hopes that bringing a new life into the world will magically solve all their problems.

But look, Ted is a bear and Tami-Lynn is a human. The normal route of getting pregnant isn’t going to work here. So Ted enlists best pal John (Mark Wahlberg) as a sperm donor, but things go horribly wrong at a fertility clinic, which causes them to scrap the whole idea.

When  Ted and Tami-Lynn try to adopt a child, the government becomes aware that Ted isn’t technically a real person. Thus, he loses his job, his identity and all his personal documents, and his marriage is annulled.

So he and John hire a lawyer — the adorable, pot-smoking Samantha (Amanda Seyfried) — to fight the lawsuit. Sparks fly between her and the newly-divorced John, as the trio heads to New York for legal reinforcements. Unfortunately, creepy Donny (Giovanni Ribisi) from the first movie has cooked up another evil plan to get a Ted of his own.

Historically, I’m not a fan of raunchy movies, notwithstanding the occasional “Knocked Up” or “Bridesmaids,” but it occurred to me while watching “Ted 2” that there are two kinds of raunchy movies — smart raunchy (Judd Apatow, Seth MacFarlane) and stupid raunchy (Adam Sandler, Keenen Ivory Wayans). “Ted 2” falls into the smart category.

Here’s why: amidst the sperm jokes, f-bombs and bong-smoking are sweet moments like Ted being hurt when he realizes he’s not seen as human, and

Amanda Seyfried strumming a guitar and sweetly singing “Mean Old Moon” around a campfire. In other words, “Ted 2” is not just raunch. There’s some emotional depth there.

The writing and production value is also excellent. It starts off with a splashy musical number (a Seth MacFarlane staple), and includes jokes about Seyfried’s resemblance to Gollum, a fun scene where Ted is driving a car and listening to “Mess Around” (which reminds me, I need to watch “Planes, Trains and Automobiles” again), and a parade of stars that includes Tom Brady, Jay Leno, Liam Neeson, Sam Jones (Flash Gordon!), Patrick Warburton, Michael Dorn, John Slattery and Morgan Freeman. (“I want to sleep in a bed made of your voice,” Ted tells him.)

Yes, there’s foul language, vulgar comedy and sexual innuendos, but if you can get past all that, “Ted 2” is a touching and funny comedy about friendship, love and social justice.

Violence/Gore: Characters are thrown out of windows and across rooms, smacked with large objects, punched and bullied. Apples are thrown at passing joggers, and a bicyclist gets into an accident.

Drugs/Alcohol: Characters smoke pot throughout the movie, including joints and through a bong. Also cigarette smoking, frequent beer drinking, and references to cocaine.

Which Kids Will Like It? Kids aged 18 and older who liked the first movie or Seth MacFarlane’s brand of comedy.

Will Grownups Like It? “Ted 2” is raunchy, but it’s “smart raunchy” with good writing and a quality production (even a musical number!).