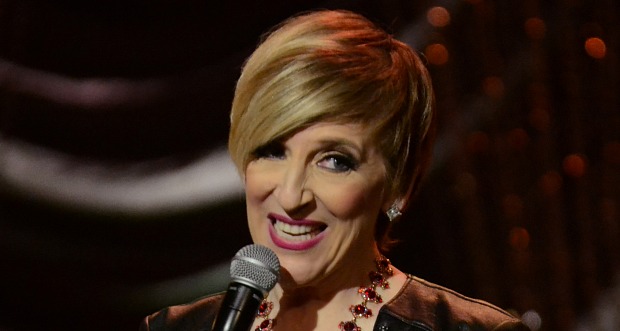 When the phone rang, the caller ID said Lisa Lampanelli. I was surprised that her assistant would call me from that number and picked up to wait my turn in the queue. Boy, was I shocked when I heard Lisa’s voice. No assistant, just Lisa making her own calls. I had to contain myself, because I always get excited and star-struck when speaking to a celebrity.

Lisa’s fifth stand-up special, “Back to the Drawing Board,” premiered on EPIX June 26, 2015, but check listings for more airings. She’s known as the insult comic and in that vein does not disappoint. She knows her people and knows what they want, so hang on to your clam. It’s a raucous hour of equal opportunity insults served with love.

I spoke to a much different Lisa, who was very chill sitting in her favorite place – her dirty couch cushion in her beach house looking out on the water with her rescue dog Parker. She revealed, “I’m always in a good mood when he’s around.”

Lisa said Big Frank D’Amico was a real mentor to her. He based his comedy on delivering a laugh every six seconds. All the older comics were generous with her, and the Friars Club was instrumental in pushing her to Comedy Central, where she landed on celebrity roasts, which led to her solo shows.

Comedy’s Queen of Mean is minus 100 lbs. and sporting a new haircut. She answers all your nagging questions and more, so pull up a seat. Be sure you have nothing in your mouth while watching, or you might possibly spit it out in laughter.