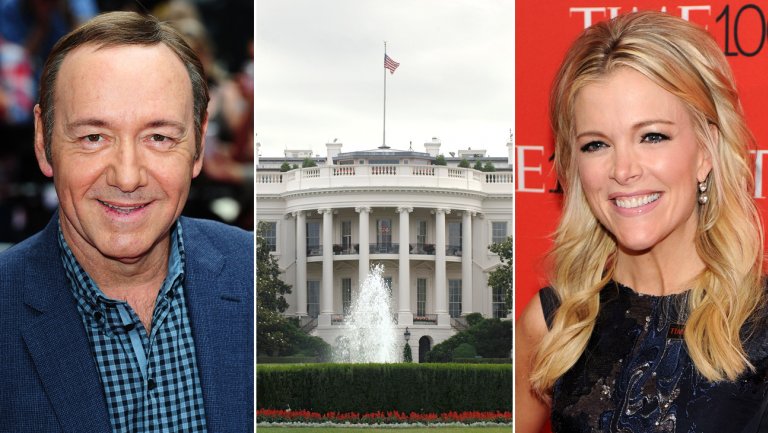 Kelly is host of “The Kelly File” on the conservative Fox News, while Spacey has been an outspoken Democrat forever. But good for them! Maybe it’ll encourage others to reach across the aisle, and that’s never a bad thing.

According to The Hollywood Reporter, the project, titled “The Resident,” is a cross between “Downton Abbey” and Spacey’s Netflix show “House of Cards.” The story follows relationships between White House residence staffers and the various First Families that move in and out of the mansion across several administrations. Kelly is attached as a co-executive producer.

I just started watching “The West Wing” (I know – I’m a little behind on that one), and I just love TV shows centered on the inner workings of The White House. Other people apparently do, too, since there’s no short of them, including “Veep,” “Madam Secretary,” “Scandal” and “The Brink.”

“Kevin and I are always looking to align Trigger Street with entities that understand what we expect to accomplish and how to maximize all resources to produce the best content possible,” said Brunetti. “Our past and current projects demonstrate how we do things differently and partner with who we feel are the best at what they do. Trigger Street and Fox have the makings of a powerful team, and we look forward to our upcoming projects.”

With a feature film resume that includes “Captain Phillips” and “The Social Network,” the new deal marks a big move into scripted television for Trigger Street. Previous TV efforts include HBO telepics “Bernard and Doris” and “Recount,” as well as Spacey’s Netflix show “House of Cards.”

And Megyn Kelly is basically a rock star on Fox News, having moved from an afternoon time slot to her evening show in 2013. “The Kelly File” is now the No. 2 telecast in all of cable news.