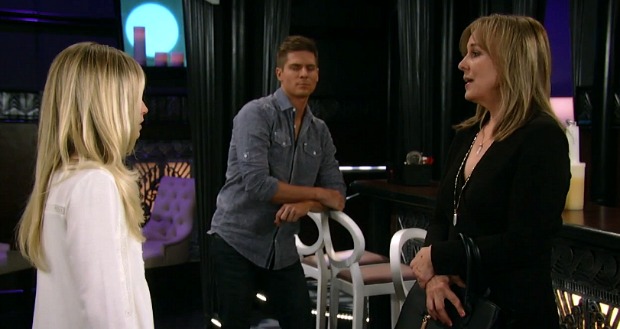 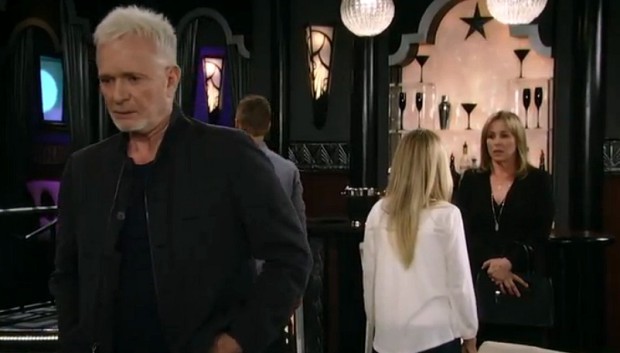 Thanks for bringing Luke and Laura back together, GH. Seeing them back at the Triple L Diner was wonderful, but even more amazing was just seeing them together, talking and connecting. Wow. That felt like coming home to me.

It’s funny how some couples just click, and these two always have (this also makes we wish we had just one marriage that lasted on the show – someone to prove love can last). It was sweet to listen to them talk about their past, and how they were truly happy there at the Triple L. I didn’t recognize the voice of the alleged kidnapper who came in the door of the Triple L in the preview, so it will be interesting to see who it is.

I think the biggest news of the week, though, was that Silas was able to speak above a whisper. He got so upset with Ava kissing him AND making out with Morgan that he was able to raise his voice to an audible decibel. I thought Denise/Ava was going to spit nails when Michael wouldn’t let her see baby AJ. Mama bear was not happy. She and Morgan are in hot water. Morgan. Dude, really? You can’t keep your hands off Ava tarted up in a bad wig, too much makeup, and tacky clothes? They practically had sex on Michael’s office couch at a company where neither of them works or is really welcome.

I mean, I totally just rip my clothes off when I run into a hot guy at corporate offices, so I totally get it.  Ava has a problem with spontaneous sex. First in a crypt, now Michael’s office. Of course Rosalie walked in and now has this to hold over them. I wonder, how will she use this? To somehow save herself from Michael turning her in for corporate espionage?

The ELQ share game is great fun. Nikolas has snagged Brook Lynn’s shares (and also now knows Julian and Olivia’s baby is alive — I’m sure he will use that to his advantage again somehow) and just needs a half a share to kick him over the top to a majority interest. But Dillon turned down his offer of funding his movies in exchange for half a share (and I do not understand at all what type of films he supposedly makes). Lulu is onto Nikolas, and the jig is now up, Nik.

All of this ELQ tizzy has spurred some interesting pairings. Sabrina and Tracy are pals. Sam and Jake are now on the same side. Rosalie’s in hot water, and Nikolas probably doesn’t have her back. Liz is trying to help Nikolas because she thinks working under Quartermaine ownership will spur Jake to remember he is Jason. Judging by his reaction when he walked into the mansion, that could definitely happen.

Valerie did some serious finger shaking to defend Dante against charges of racism, and Maxie then called her on it. I loved Maxie for doing that. The girl has excellent instincts. And I loved the mention that Maxie is a wedding planner and personal shopper. Ha. Maybe once a year. Not quite a career. (It’s ok – half the city is unemployed and seemingly unconcerned about it also).

Maxie is boycotting Wyndhams and, gasp, having to shop at the mall! While Dante and Valerie definitely are being drawn together, Lulu and Dillon shared a very tender moment, talking about the baby they aborted. That was a very touching scene. However, Valerie has now seen them hugging and discussing a secret (Luke and Laura running off to save Lucky from kidnappers), so now she will feel completely justified jumping Dante’s bones. We can kiss that marriage goodbye.

What I have yet to figure out is what exactly is Valerie’s job title. What is a PAA? I know she is an assistant of some kind who apparently carries files around the room and buys coffee, but I don’t know what her title actually is.

Sadly, I have no fashion picks for the week, but I have to say I was so delighted to see Tracy in that bathrobe that showed she does not have a perfect figure (three cheers for real bodies). She always looks so slim the way they dress her (can someone dress me so I look slim?).

Someone needs to tell Sabrina that it’s going to be hell chasing after that baby in those heels when AJ starts crawling. Sam upgraded her wardrobe this week from leggings and a tube top to a denim shirt over a cami, so she’s coming up in the world. The GH wardrobe department thinks that women in business only wear very dull tops and skirts – Valerie and Rosalie have the most boring wardrobes ever.

Someone also needs to tell the Metro Court they either need longer straws or shorter glasses. Maxie had to keep digging her straw out of her glass to take a sip.

I believe all Kiki does is go to lunch or dinner with people, so it would be nice if she could get an actual job at some point. It seems Morgan might be working for Sonny since he was going to go check on properties in Atlantic City for him. That was a quick throw in, so I would love details. Is Morgan in the mob? Sonny needs a new enforcer with Sean in jail.

I’ll be gone the next three weeks, but look forward to getting back and catching up with all of you then!